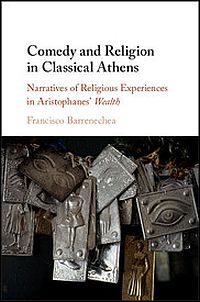 The comedies of Aristophanes provide us with a plethora of valuable glimpses into classical Greek religion in its many facets. In spite of this, religion and the gods in comedy have, with notable exceptions such as Angus M. Bowies' study of myth and ritual in Aristophanes and Anton Bierl's work on the chorus of Old Comedy, received relatively little concentrated monographic attention in comparison with their tragic counterparts. [1] Francisco Barrenechea's lucid study of the religious discourses present in Aristophanes' Wealth is therefore a welcome contribution to scholarship on Aristophanes as well as on the intersection of religion and drama.

The five chapters of the book, each of which discusses a significant religious aspect of the plot (personification, oracles, incubation, household shrines, and new gods, respectively), are framed by a concise introduction and a conclusion. In his introduction, Barrenechea sees his book as continuing the work of previous scholars on religion in comedy by 'opening up other religious patterns besides those of ritual, festival, and myth' (3). The assertion is slightly misleading, as the practices (for instance, incubation) and literary and narrative traditions discussed (such as the characterisation of Ploutos and healing stories in cult) have much to do with myth and ritual. A short discussion of the terms Barrenechea more frequently uses for the focus of his study, such as 'belief' and 'traditional religion', would have added to clarity. But the analyses of the chosen complex of religious phenomena are new and thorough, and Barrenechea is again on stable ground in the introduction when he states his aim as offering a 'more holistic reading' of Wealth by examining the 'rich [...] religious framework, based on traditional narratives of religious experiences that permeate the plot and underlie its comic fantasy' (1). His close attention to the dramatic context is indeed a major strength of the book and will make it useful not only for scholars of the play, but also for those looking to understand the literary potential of the religious elements under discussion.

The first chapter centres on Ploutos himself. His particular features in the play and contrast to Zeus and Penia are discussed in a nuanced way and in relation to other portrayals of the figure. A large part of the chapter is devoted to understanding exactly where the boundaries between real and fictional gods lie, and how personifications fit into the picture: distinguishing 'actual' from 'fictional' and cultic from literary gods remains a thorny business, however, and may present us with more trouble than an ancient worshiper, as the author remarks (13-14). Barrenechea's discussion certainly encourages further thought about who and what was seen as a Greek god. Ultimately, however, it is the agency of Ploutos which matters for the play, regardless of his exact divine status, and Barrenechea convincingly argues that Ploutos' superhuman power is central for understanding his role as more than just a poetic device.

Ploutos' philanthropism works in concurrence with that of two other gods, Apollo and Asklepios, whose realms of benevolent influence are the focus of the next two chapters. Wealth may be the only extant comedy in which the 'comic plan can only be achieved through divine intervention' (66; it is also the only comedy in which a god causes the problem as well: 32), but, Barrenechea argues in the second chapter on oracular communication and its integration into the stage-action, this does not downplay Chremylos' agency. On the contrary: Barrenechea sees the fulfilment of oracles as a process of human and divine collaboration; the comic plot enacts this process.

In the contextualisation of 'first-met' oracles (which advise specific action upon meeting the first person or thing of a certain kind), but especially in his discussion of incubation in chapter three, where he argues that Aristophanes has adapted characteristic elements of Epidaurian narratives of incubation cures, Barrenechea adopts an interpretative approach based on understanding the structures associated with particular narratives. [2] Recurrent structures and motifs lend the stories believability; the use of such structures along with their inherent aretalogies and presentation of the god as a benevolent and moral healer work towards Barrenechea's positive reading of the play as fundamentally affirming, not undermining, 'traditional belief' in ritual efficacy and reciprocity between gods and humans. This stance is made explicit in the book's conclusion (162-180): the comedy makes room for scepticism in its discourse, but, as in the miracle narratives, it is 'good hope' and the resolution of scepticism through the miracle which prevail. Zeus remains a bugbear in this interpretation; although Barrenechea's discussions of Zeus' relation to other myths are insightful and his argument for Ploutos' cultic integration in the play persuasive (155-159), one wonders whether Zeus' misanthropy and ousting from cult do not widen the gap between the fantasy of the play and concepts of gods in cult and ritual narratives enough to win scepticism more consideration.

The fourth chapter addresses theatrical space. Barrenechea traces the redefinition of the skene from Chremylos' private household into a public shrine through a series of divine (epiphanic) and human (ritual) actions. At the same time, the bounty of Chremylos' household is exemplary of the material wealth brought to other households as well: the space of the skene shows the communal enrichment marked by Ploutos' establishment.

Barrenechea views Ploutos' establishment in the house and community as modelled on cult aetiologies for new gods, or, as he terms them, 'new god tales', discussed in chapter five. It is arguably much more difficult to discern a narrative pattern for new god tales than for oracular and miracle narratives. Our sources for the introduction of new cults in the classical era are, with the exception of Asklepios, thinner than we might like and must be fleshed out with the occasional later account (of Sarapis, for example: 141-142). Furthermore, there is not, as Barrenechea notes, a distinct genre of new god tales in antiquity. [3] The difficulties do not, however, rule out the possibility that the 'conventional nature of the tales' (that is, of the way the introduction of new cults was presented) could have 'given the experience a recognizable form' (142).

In his conclusion, Barrenechea draws together the arguments and analyses of the preceding chapters into a final, optimistic reading of the miracle, and comic salvation of the play as the result of divine and human collaboration. He stresses the potential of the genre for exploring ancient religious experience with its ambiguities and doubts, but asserts that it simultaneously and ultimately reaffirms belief (178).

The strongly positive interpretation of Wealth and of the comic treatment of religion is bound to draw similarly strong critical reactions - but perhaps that is just what is needed to prompt further book-length discussion on the comparatively underrepresented area of gods and religion in comedy. Scholars engaging with the topic or with Ploutos will certainly benefit from Berrenechea's contribution, whose many insights on specific scenes and problems make it a thematic commentary in its own right, and whose clear prose and coherent presentation make it a pleasant read as a monograph.