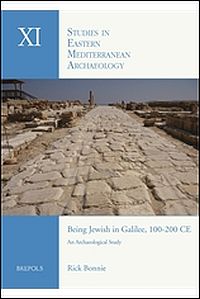 When a doctoral student has the insight, fortune, and support to plough a pomerium around a new field - rather than offering the more customary fresh take on Alexander, the Aeneid, or the Book of Acts - the thesis has the rare potential to become a reference work. This book, which began as a Catholic University of Leuven dissertation (2014), is that. Bonnie had discovered a parcel of rich and unfenced land: "For the archaeology of second-century Galilee no exhaustive treatment so far exists" (2). One of the book's two main purposes is to define and settle this turf: to collate and systematically examine a "comprehensive archaeological dataset" (319). Bonnie does not consider this flyover century as hermetically sealed as the title might suggest. He will make comparisons with contemporary architecture elsewhere (Greece, Italy, and North Africa as well as the Levant) and with the literary corpora of Josephus and the rabbis, before and after the period (23).

The Galilee Bonnie has in view is not that of modern Israel, which includes the coast, but rather the inland, Upper and Lower regions described by Josephus (2-3). To cover the material remains from here in a thorough way, the book zooms incrementally from regional to communal to private life (23). After the Introduction (below), Chapter 2 (25-40) takes up Rome's new roads and the milestones on imperial viae, which cemented the position of Sepphoris in a regional network anchored in Legio and Ptolemais. Chapters 3 to 5 form the bulk of the study, exploring communal identity by way of "Building new Urban Communities: Magdala, Sepphoris, and Tiberias" (41-114), "Public Building and Urban Identity" (115-170), and "The Development of the Synagogue after 70" (171-208). Chapters 6 to 8 reach down to private living under the heads of "Changing Countryside? Houses and Settlement Patterns" (209-248), "Housing and Urban Society" (249), and "Jewish Purification Practices" (287-318).

Bonnie's methodical approach to the sweeping subject matter enhances the feel of a vade mecum. Each chapter moves from basic information to complex and debated questions, offering a crisp history of research where needed. Bonnie shows a knack for grasping the heart of the issue and grouping arguments around it. He does not get bogged down in esoteric discussions but, having limned the scholarly terrain, deploys a "probably" to declare his views and move on. Scores of well-placed visual aids in the form of maps, tables (e.g., published milestones and exposed road sections, urban areas, colonnaded streets, house sizes and styles), site plans, elevations, and photographs combine with the high-quality binding, semi-gloss paper stock, and double-column layout to confirm the work's aspiration to be, and its value as, the first handbook on the material culture of second-century Galilee. For anyone with relevant interests at any level, it is a volume to have and to hold.

This is not to say that every background statement - for example, that Archelaus' territory "became the senatorial province of Judaea" in 6 CE (6), that Hadrian's change of the (much later senatorial) province's name from Judaea to Syria-Palaestina was "probably a form of punishment" (5), or that Josephus was "leader of the Jewish rebel forces in Galilee" (23) - could stand up to a critical jab. But in the original heart of the book, from Chapter 2 onward, Bonnie reviews evidence and arguments so conscientiously that even readers who demur from his judgements will benefit.

Demurral there will be, because the innocuous-looking handbook hosts within it a monograph with a research question, a method, and an argument. These are marshalled in the Introduction (1-24) and recalled as needed throughout the study. The several particular research questions coalesce in the problem of Jewish identity, or "what it meant to be Jewish", in Roman Galilee of this period (21-22). Making this omelette, it turns out, will require many eggs to be broken. Bonnie's opening review of recent scholarship already highlights assumptions and categories that he finds anachronistic, in applying first-century or rabbinic criteria to the second century, and too rigid and binary: Roman or pagan vs. Jewish, rabbinic vs. other Jewish. Earlier research had also erred in using a flawed "typological" method to date many of Galilee's urban remains, putting them too early and thus creating a picture of thriving Graeco-Roman urban culture by the early first century CE, under Herod Antipas (12). The more disciplined stratigraphy of recent decades has pushed the dates of at least some structures, such as Sepphoris' theatre, a century or two later.

This diachronic definition dispels the fog that had made everything from the first century BCE onward look like "Hellenistic-Roman urban culture," and so makes possible Bonnie's programme of monitoring change or "movement" in the material record, from the late first to second centuries. These changes provide his Schwerpunkt and his chief criterion for delineating a second-century Jewish identity (7, 21, 23): "To what extent did a Galilean Jew living in the second century differ from her/his ancestors a century earlier?" (2). In developing answers to that question, he takes inspiration from post-colonial studies to challenge both the traditional opposition between Jewish and Roman (19), rather finding the Empire a "middle ground" of multidirectional influences, and a notion of Jewish identity as something fixed, rather than "bound to change through contact and interaction" (22).

Bonnie spells out the results of his investigation in a concise Conclusion (319-323). What changed? The position of Sepphoris in the new imperial road network went hand in hand with its flourishing, along with Tiberias, as both cities began to sport theatres, bath-houses, colonnaded streets, and other urban features, as well as peristyle houses. This period also saw the rise of temenos temples in Sepphoris, rural Qazion, and apparently Tiberias, implying the worship of Roman deities. Meanwhile, the standard markers of earlier Jewish identity, linked to a concern for ritual purity (viz., stepped immersion pools, stone vessels, and synagogue construction), fade from the scene. The second century attests no new synagogues or stoneware, and the earlier in-ground stepped pools are either built over or used for storage. What caused these changes, and what did they mean for Galilean Jewish identity? Rather than support Seth Schwartz's argument that the period saw a loss of Jewish identity before its reassertion in the following centuries [1], Bonnie argues that these changes represent the considered choices of Jewish elites in forging a new urban identity, in conversation with other urban elites throughout the region, while village life remained more conservative. Epigraphic evidence shows them even supporting the temples for other deities. These urban Jews did not cease to be Jewish, but rather their Jewishness "became rooted in a wider network of cultural styles and practices" (323).

Insofar as this is the first handbook on the material remains of second-century Galilee, I commend it without reservation. Although archaeologists will disagree with particulars, Bonnie takes care to present the evidence and the scholarship in a fair-seeming way. When I read it as a historical investigation, by contrast, a river that I cannot cross over separates me from the book's overall logic. Since I am not an archaeologist, but a historian of humanistic stamp, I accept some responsibility, while giving a brief indication of my misgivings.

Any study of identity and meaning (especially "what it meant to be X") is fraught with peril because of the malleability of such terms. Bonnie does not dwell on definitions, but apparently understands identity to consist in social practices, which in turn are "observed in the archaeological record" (322). This connective tissue raises a number of questions. First, where is the record to which Bonnie often refers? Those who built structures or roads were not recording, and those who interpret them today are not either, a point that emerges clearly from the many divergent opinions Bonnie registers. Excavators keep records during excavations, to be sure, in diaries, sketches, and photographs, but Bonnie's repeated reference to a larger single abstraction, the material/archaeological record, seems to mean something else. I am not sure what that is.

Second, "identity" is a modern coinage, from French identité. Given its root in Latin idem ("same [as]"), Samuel Johnson's 1755 dictionary took it to mean "sameness; not diversity," whereas nowadays identity tends to be a function of diversity, a matter of fluid self-conception in flux. Neither the abstract term nor these meanings had ancient currency, though it was certainly possible to ask about where someone fit or belonged: "What is your ethnos or polis?" In Antioch, Caesarea, Scythopolis, Alexandria, Rome, and throughout Asia Minor, we see Ioudaioi targeted and abused or expelled by a majority population because of their belonging (or not-belonging) status, just as they in turn attack foreigners in their poleis (Josephus, Bellum 2.458-480; Vit. 67). None of these options, however, has much to do with the "social practices" that define Jewish identity for Bonnie. Before embarking on such an investigation, an author might pause to ask with readers whether "what it meant to be Jewish" was a question that one could ask in antiquity and, if it was, in which terms? What are we getting at, exactly, in the life of ancient Jews?

My most basic methodological issue concerns the nature of historical investigation. If space permitted I would use those parts of Chapter 2 that concern Tiberias (64-89) to illustrate. To make his case that the city became an urban centre only in the second century, Bonnie stresses that the first-century dates given by excavators are not certain, whereas second-century dates "cannot be ruled out" (77). He thus takes uncertainty about the first century as confirmation of the second. Space does not permit elaboration, so I retreat to a two-sided evaluation: commendation of this handbook on the archaeology of second-century Galilee with reservations about the historical argument.