Peter Linehan: At the Edge of Reformation 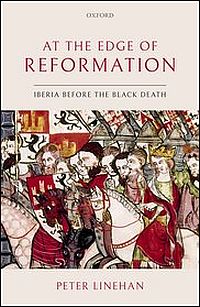 We have learned to expect from Peter Linehan reconstructions of powerful events in late-medieval Iberia. Over the long course of his career he has focused especially on the points where the personal ambitions of religious and secular leaders collided or colluded in confounding and contradictory ways. It appears to be his view that while kingdoms and princely houses, the papacy, bishoprics and monasteries, courts of law and letters - the institutions at the forefront of peninsular society - sought stability, the personages who led those institutions rarely succeeded in escaping the disarray, mal intent, and lack of foresight that is essentially human. In its overall scope, At the Edge of Reformation is situated within this frame.

Linehan's focus is Castile and Portugal in the first half of the fourteenth century. He watches the Portuguese kings Denis and Alfonso IV and the Castilian kings Ferdinand IV and Alfonso XI going about their business. He sees these kings working with and against each other, as they work with and against popes Clement V, John XXII, Benedict XII, and Clement VI, and as they work with and against various other regional and local ecclesiastical and secular lords, including their own legal advisers. The records he most carefully examines come from the metropolitan provinces of Toledo, Braga, Seville and Santiago. These records elicit local politics, reasons of state, papal ambition, synodal exigencies, and hard financial facts, revealing in sum how each of the observed players attempted to augment his own personal powers and extend the conception of his own office, all the while acting in a world of other potentates competitively doing the same.

Linehan kicks up a lot of dirt, as is his habit, but readers may wonder about the potency of the deliverables in this instance. Perhaps the author wants to add density and detail to what historians who take the long view already know, which is that the crises and experiments of the early- to mid-fourteenth century led to anxieties and opportunities that, in their sorting out over the century and more that followed, contributed to the religious and political shifts we call the Reformation. We might infer that he wishes to insert his findings into the ongoing subtle debates about the long-term precedents to reform or to take a position in debates about the catholicity of reformist origins. Neither point is directly expressed. What comes through more clearly is a common and generalizable fact: enemies sometimes find reason to work together and friends sometimes distrust one another and work to stifle the other's progress. It is hard to understand how the book's contents put it at the "edge" of the Reformation or any other event. No soothsayer appears to offer a portent of crisis or doom, none of the book's actors identify a precipice, or limit, or threshold, and reform remains very far off.

Readers who know Peter Linehan's work might agree that he tends to give priority to voluminous data over either clarity of interpretation or transparency of prose. A few reviews of his earlier work have characterized it as obtuse and eccentric, and At the Edge of Reformation does little to contradict that assessment. Take, for instance, the incredibly long second sentence on page 100. After eighteen commas, 11 semicolons, three footnotes, and two parenthetical statements, I cannot understand what the sentence is about. Its many convulsions may make it an outlier, but not by much. One section of chapter seven, subtitled "Álvaro Pais Again," pages 159-160, exemplifies the book's mystifying structure. Linehan mentions Álvaro Pais, bishop of Silves, papal penitentiary and canonist, a couple of times in several earlier chapters, although never with a degree of biographical depth that would have us take note of him as a memorable character in the narrative. Thus, when Álvaro returned "again," I had no reason to remember that he appeared before. Readers may be at odds to see why Linehan named the subsection as he did, since the subheading has nothing to do with the section's contents: Álvaro is not its subject; rather, he is introduced to serve as an instance of a man giving advice that Alfonso IV doesn't want to hear.

Readers may agree that by three or four pages in the presentation of evidence makes for frustrating reading. This is not because the volume of evidence is itself overwhelming, but because the lack of some basic contextualizing elements leaves readers to do much of the interpretive work on their own. From untamed punctuation, to subheadings ill-fitted to the contents of their sections, to chapters that do not add up one to another, the author omits things that readers should rightly expect. One will not find an introduction of themes, a basic sense of chronology and periodization, any assertion about what is to be learned, a reason for the investment of reading time, a concluding chapter rather than something "by way of conclusion." While it is usually the case that ample foreknowledge of the subject helps readers through Linehan's books, here the narrative has more difficulty telling itself than in his earlier works. It is not as salacious as the book about the ladies of Zamora, not as intriguing as the study of generations of historians using the past for their own purposes, not as purposeful as the investigation of kings creating nations without knowing that was their task.

A final note: The author's English bias against his medieval Iberian subjects seems especially pronounced here. Corruption, contumacy, sexual dalliance, social deviance, endemic unrest, and violence in a range of forms - these provide the fuel that motivate the interactions of Linehan's high-born and highly placed Portuguese and Castilian subjects. He seems eager to demonstrate through a few well-placed comparisons with his own nation and people that such flaws and failings, corporate and individual, are peculiarly Iberian. I'm not willing to follow him there. Because the peninsula's records are very rich, Linehan's archival forays confirm for us that his subjects were not saints. Still, as far as I know, kings and prelates in England showed a similar inclination to bending and breaking the rules, sexing it up outside of marriage, holding and trading church property as if it was their own... the usual stuff.