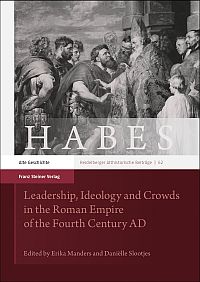 In late Roman society emperors were ubiquitous. They presided over a large provincial administration and commanded a huge army; they issued laws and responded to petitions; they funded construction projects in many cities and were praised in panegyrics; their statues were everywhere. Emperors seemed to be all-powerful.

At the same time the limits on imperial rule were extensive. The emperors' own officials edited laws before putting them on public display; many people were illiterate and could not read public dedications; local notables might take credit for new buildings and monuments; the heads of statues were recarved as new emperors. Most provincials never saw an emperor. After the early fourth century no legitimate emperors ever again visited Spain, North Africa, Egypt, and Palestine. Even before the barbarians overran the Rhine and Danube frontiers, the entire southern half of the empire, from central Gaul through Africa to Syria, was drifting away from imperial rule. Emperors had become fantasy rulers, perhaps to be imagined as survivors of the world of Homer. At the end of the fourth century bishop Synesius claimed to know people in Cyrenaica who thought the emperor was Agamemnon.

Authoritative or irrelevant, present or absent: how are modern scholars to interpret the interactions between Roman emperors and their subjects? This book offers stimulating discussions of the leadership of emperors during the fourth and early fifth centuries. While investigating case studies of individual emperors, specific events, and contemporary ideas, the chapters adopt a largely transactional perspective. In the introduction Jan Willem Drijvers, Erika Manders, and Daniëlle Slootjes emphasize that leadership was the outcome of a negotiation between rulers and subjects. Although emperors certainly issued directives and represented themselves as powerful and victorious, their subjects had a voice too. Their applause and criticism should also be considered as tools for encouraging or limiting emperors' behavior.

Constantius II provides Gerda de Kleijn with a telling example for evaluating the balance between an emperor's personal influence and his positional power. Even though Constantius had surpassed the tenure of his father, Constantine, by serving as an emperor for thirty-seven years, de Kleijn nicely demonstrates that near-contemporary historians had not been impressed. The only virtues they admired were his temperance and clemency. Without the supplemental authority derived from exemplary personal traits, Constantius II had had to rely simply on the power of his office.

To project their authority emperors used various media. In an overview of the buildings associated with imperial residences Verena Jaeschke emphasizes the importance of a circus, where emperors could preside in person and crowds could shout their opinions: "the circus played an important role in the ritualized communication between the ruler and his people" (28). By highlighting the messages conveyed by the images and legends on coins, Erika Manders concludes that depictions of local deities on Maximinus' coins were not propaganda against Christians. Instead, the images legitimated his authority as he expanded his imperial jurisdiction to include additional cities. Elisabeth Herrmann-Otto and John Curran each investigate some of the extravagant rhetoric in imperial laws. Herrmann-Otto suggests that moral defamation and threats of severe penalties were "die Strategien, mit denen man die Massen ansprechen und beeinflussen kann" (74). Curran notes that even as the pronouncements of Christian emperors expressed hostility toward Jews, their laws tempered this antagonism by acknowledging the Jews' historical legal standing: "there were individuals in the law-making process who wanted to uphold the privileges of the Jews" (89).

Emperors also were the leading actors in public ceremonies. Martijn Icks argues that even though emperors became less accessible, they were also more visible in public appearances: "seeing the emperor with one's own eyes appears to have lost none of its appeal" (168). Meaghan McEvoy demonstrates how the emperor Arcadius was able to maintain contact with the citizens of Constantinople. Rather than hiding in his palace, he participated in installations of the annual consuls, commemorations of imperial anniversaries and births, imperial funerals, meetings with troops, dedications of monuments, and the celebrations of Christian holy days. He even went to exercise in the suburbs.

Highlighting the media available to emperors, such as coins, laws, ceremonies, and construction projects, still requires an evaluation of their impact on audiences. Sometimes the audiences talked back through the medium of public orations. Although Adrastos Omissi claims that emperors used panegyrics to communicate to cultural elites, in many cases the connection was reversed as the orators were trying to shape imperial behavior through flattery and occasional critiques. "Display and formal speechmaking was part of the business of accessing imperial government" (41).

The leadership of bishops seemed to be the opposite of emperors. Emperors were transient and distant from almost all cities, while bishops were typically local and stationary. But bishops also had to respond to the audiences in their communities, and they looked for boosters in other communities. Julio Cesar Magalhães de Oliveira discusses a bishop in Numidia who gathered his "fighters" by sending out heralds. In contrast, bishop Augustine of Hippo was forced to agree with a restless crowd in order to prevent violence and reassert the authority of clerics. At Rome a mob of grave-diggers, gladiators, and charioteers ensured the election of Damasus by slaughtering his rival's supporters. As atonement for this bloodbath, Marianne Sághy suggests that the new bishop promoted the cults of martyrs. "Damasus recruited from the dead a group of loyal supporters and patrons" (123). The veneration of martyr-saints who had once suffered from violence would be a warning against another reckless bloodbath. Bishops also looked for supporters among other bishops. Carmen Angela Cvetković notes that Niceta of Remesiana travelled all the way to Italy in "a sustained effort to build ties with important episcopal sees from other regions than Illyricum" (147).

The most important contribution of these chapters is attributing agency and a voice to crowds and audiences. Another asset is considering the leadership of emperors and bishops together. In fact, the lessons of these chapters should now be extended to other leaders in late Roman society, including local notables, municipal magistrates, and military officers. Leadership could be effective only when the leaders listened to their audiences.