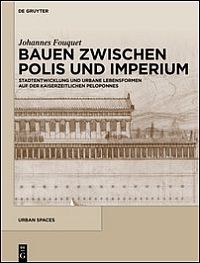 The polis did not die at Chaeronea, nor did it die at Actium. This volume therefore contributes to on-going conversations about what poleis of the eastern Mediterranean looked like and how they acted within the Roman Empire. Specifically, it explores the shifting urban landscapes of poleis in the Peloponnese, largely between the reigns of Augustus and Trajan.

The book is an updated version of the author's dissertation completed at Heidelberg in 2016. As set out in Part I, it draws on two prominent theoretical frameworks: Martina Löw's work on urban space and 'Romanization' studies, especially in their turn to globalization theories. It thus addresses dynamics between more global developments and local traditions in the innere Urbanisierung of Peloponnesian poleis. This focus encompasses the expected monumental buildings but also such infrastructural projects as water systems and road paving.

Part II details changes in the urban landscapes of three major poleis: Corinth, Sparta, and Argos. Fouquet chose these three case studies due to the availability of evidence and their importance within the Peloponnese (4-5). Their importance lies in either being a Roman administrative center (Corinth) or an historically famous city (Sparta and Argos). Unsurprisingly, given available evidence, the case study about Corinth (at 160 pages) takes up the lion's share of the volume, compared to the 40 pages each dedicated to Sparta and Argos.

All three case studies in Part II are primarily concerned with establishing chronologies of urban development at these sites. While scholarship often touts the importance of the Augustan and Hadrianic periods for Roman Achaea, Fouquet's detailed chronologies repeatedly highlight the importance of the Flavian-Trajanic period for the Peloponnese, especially Argos. This timeline helps us to see beyond imperial visits by Nero and Hadrian as explanations for urban investments. It also highlights the long process of economic recovery that many Peloponnesian poleis faced after wars of the 2nd and 1st centuries BCE. Intriguingly, given economic considerations, the developments often fall after Vespasian rescinded Achaea's 'freedom' granted by Nero.

Part II frequently points to 'urban elites' as drivers for development. Fouquet sees the reliance on donations from individuals (versus civic or imperial funding) as shifting emphasis towards projects suited for self-representation and promotion. For instance, donors preferred to build or repair an individualized monument versus pave a road. The volume identifies several individuals who were particularly prominent benefactors. As is usually the case, the term 'elite(s)' encompasses much more variety in background and agency than the category suggests on its own. These case studies therefore help lay the groundwork for future analysis and differentiation among 'elite' benefactors in these regions.

Befitting the title of the volume, Part III, which addresses continuity and change, sticks closely to specific urban spaces and building types. It covers infrastructure, agorai and fora, structures related to imperial cult, and entertainment and leisure buildings (e.g., theaters, odea, circuses, amphitheaters, baths, gymnasia). With its largely typological approach, Part III primarily contextualizes the original three case studies within the greater Peloponnese. Patras, Mantineia, Messene, and Sikyon are prominent comparative examples brought into this section. Here, visible changes are usually still anchored in the past and are often more marked at coloniae. The analysis also convincingly ties most changes to economic recovery and general realities of incorporation into an overarching, hegemonic state, rather than aggressive 'Romanization'. For instance, loss of political and military autonomy may have decreased the need for upkeeping city walls.

Overall though, Part III highlights continuities over changes, at least for the 1st century CE. It shows that benefactors continued to invest in traditional Hellenic markers of urbanity, such as agorai and gymnasia, and that local building techniques continued to be used. Similarly, Corinth and Argos' connections to Panhellenic festivals can help explain investment in new and old forms of entertainment buildings (which could be compared with developments related to Sparta's own cultural tourism mentioned in Part II). However, as rightly noted, maintenance of local urban forms and traditions often aligned with Roman imperial interests. Therefore, the picture of continuity that emerges from these urban spaces is not a static and apolitical one. Given this balancing act, a notable pattern in Part III is that continuity and change are negotiated not only by individuals but also by civic and regional institutions involving them, such as the ephebeia and koinon.

Helpfully, the volume includes English and Greek translations of Part IV, which situates the conclusions in a broader historical and scholarly context. Less helpfully, while it has source, place/building, and name indices, it lacks a general index. Therefore, researchers are unable to easily find references to institutions mentioned throughout the text, among other topics. Nevertheless, the volume has been beautifully produced with very clear images and site plans, which are especially useful resources for teaching and further research.

As Fouquet notes, the bibliography takes into account works published through Autumn 2018. A few other sources bolster the arguments and provide broader context. On supra-civic activity by individuals in the imperial Peloponnese, see also Anna Heller's work. [1] Her work on competition between cities in Roman Asia Minor may also be of interest. [2] An additional study of imperial cult in Roman Achaea is by Fernando Lozano Gomez. [3] Furthermore, Denis Rousset's 2008 article on Roman Achaea is a helpful intermediary between Alcock's Graecia Capta and this volume, especially regarding its final call for more attention to regional variation. [4]

To conclude, Fouquet has undertaken the daunting task of guiding the reader through archaeological sites that have often been published piecemeal. In particular, the case study of Argos is a welcome offering. Moreover, for all the case studies, this volume pays very close attention to the physical evidence on the ground. In this regard especially, Fouquet's opus is a necessary reference for anyone examining the archaeology of the Peloponnese in the Roman imperial period.