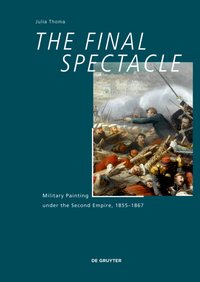 Throughout the nineteenth century, critics constantly cast doubt on the aesthetic merits of military painting, and, until recently, art history almost completely neglected the subject, except in those rare instances when reigning aesthetic codes and military subject matter happened to overlap. Art historians have been happy to dismiss military painting as vulgar, populist, kitschy, and unsophisticated - a form of mass entertainment or propaganda often connected to a disturbingly violent nationalism. And yet, military painting was a major part of nineteenth-century art. Art history's neglect of it has had the consequence that the work and careers of many of the nineteenth century's most popular painters have been all but forgotten.

Perhaps as a result of a more general interest in visual culture, perhaps out of a desire for a more complete picture of the nineteenth century, and perhaps because of a growing concern with violence and war, military painting has recently been the subject of a number of studies that have focused especially, but not exclusively, on the first half of the century. [1] Julia Thomas's The Final Spectacle focuses instead on the military painting of the Second Empire, which has been especially neglected, despite the fact that it received many lucrative official commissions and occupied an important place in numerous Salons.

The book is organized in a roughly chronological fashion, though the subjects of individual chapters emphasize, variously, the work of individual artists, official patronage, the representations of particular wars, and types of military pictures. Horace Vernet is the subject of the first chapter. His retrospective exhibition at the Universal Exhibition of 1855 provides Thoma with the opportunity to survey both his career and military painting from earlier in the century. Thus, we learn about the conventions that his battle paintings established: the hovering viewpoint, the profusion of detail and anecdote, the seemingly transparent style, and the expansive, practically panoramic scope. Many critics viewed his art as merely journalistic, lacking a focus and intellectual or moral message, hopelessly sullied by conventions drawn from popular arts, sanitized of gore, mindlessly patriotic, a lurid, distracting spectacle encouraging passive engagement. Critics who earnestly admired Vernet seem to have been thin on the ground, but they tended to embrace the spectacular qualities that connected his art to modern entertainment.

The second chapter examines more broadly the Second Empire's patronage of military paintings, which got off to a faltering start. Napoleon III had promised peace but in fact offered numerous wars. Early commissions focused on the war in Algeria, which had dragged on for decades, and a painting of the siege of Rome, a military action that was received with deep ambivalence. Before its completion in 1856, the unpopular Crimean War presented few obvious subjects for official commissions, though the government purchased a number of anecdotal paintings of it at the Universal Exhibition of 1855. An official policy for military painting did not really take shape until 1856, when France finally emerged victorious from the Crimean War. Various privately and publicly sponsored works made the Salon of 1857 especially rich in military paintings and helped to establish the detailed, illusionistic style now associated with the Second Empire. The Second Empire's policies regarding military painting often lacked coherence and embraced successful and unsuccessful campaigns alike, yet the regime produced a new generation of painters that included Adolphe Yvon and Isidore Pils.

Chapter 3 considers in detail the difficulties encountered by painters representing the Crimean War, whose bloodiness and duration had surprised the public. Established modes of battle painting that centered around the leadership of generals, often located in the center foreground, seemed contrived and failed to portray the war accurately in the eyes of many critics. They preferred instead paintings like Gustave Doré's Battle of Inkermann (1857), which foregrounded the efforts of common soldiers and furious hand-to-hand combat, or Pils's Disembarkation of the French Army in Crimea (1857), which portrayed the high command at ease after a successful landing. The main focus of this chapter is one of the most ambitious artistic projects of the Second Empire: a never-completely-finished room in the Château de Versailles devoted to the Crimean War that displayed some forty-four works by eighteen different artists. The types of paintings in the room varied enormously, and included portraits of generals, genre scenes of care for the wounded, a fascinating series of panoramic and closer views of Crimea by Henri Durand-Brager, and various sorts of battle paintings. Thoma provides an important reconstruction of the room.

Thoma's most penetrating interpretation is, however, devoted to three enormous paintings by Yvon of the most decisive action of the campaign: the taking of the Malakoff on 8 September 1855. She provides an exhaustive account of the genesis and execution of the first and largest of these, The Capture of the Malakoff Tower (1857). The particularities of the battle, as much as anything else, forced Yvon to abandon conventional pictorial strategies for representing grand battles. Thus, an unusually dispersed set of actions, carried out by common soldiers, occupies the foreground, while the commanders are relegated to the background. The painting stunned viewers with particularly vivid depictions of violence that spilled out of the composition toward the viewer, and it took liberties with the historical record, playing up the role of French forces in the battle for popular appeal. For the next Salon, in 1859, Yvon completed two more canvases of subsequent phases of the battle. These represented something of a return to normality, as they were far more focused on commanders, had more unified compositions, and generally adopted devices from the classic Napoleonic battle paintings of Antoine-Jean Gros and François Gérard. As a whole, this chapter seems to pit the hold of convention on battle painting against demands for authenticity and forms of spectacle associated with new modes of visuality. "Truth" - which was defined and qualified in a wide variety of ways - was a primary concern of critics when confronted by depictions of war, and they often found it in unconventional modes of representation.

Chapter 4 discusses paintings of the Campaign of Italy, led personally by Napoleon III in 1859. Yvon received the most important commission, for a painting of Napoleon III at the Battle of Solferino to be exhibited in the Salon of 1861. Yvon abandoned the innovations of his earlier work in order to depict the Emperor in the center foreground, directing the distant fighting, very much in the grand manner of paintings from the First Empire. His canvas was, however, a critical failure. Battle painting in general fared poorly in 1861. Far more successful were genresque depictions of the experience of common soldiers, sometimes painted in innovative ways, as had already been the case with paintings of the Crimean War in 1855. The Campaign of Italy also elicited Ernest Meissonier's Emperor at Solferino, an official commission that took the artist over four years to fulfill. Then at the peak of his fame, the artist eschewed the expected scale and formulas for such a picture, demonstrating, in the end, that the traditional conventions surrounding battle painting were not necessary for critical and popular success.

The final chapter examines a new type of picture that emerged under the Second Empire: genre paintings exploring the sentiments of individual soldiers, particularly before or after battle, and sometimes in confrontation with death. The central figure here is Alexandre Protais, whose paintings focused not on heroic deeds, but on soldiers' emotions, friendships, and traumatic experience, sometimes cloyingly so. The chapter clinches an understated argument in the book: that painting with military themes increasingly abandoned official rhetoric in favor of the experience of common soldiers and the suffering caused by war.

The Final Spectacle is an important achievement. Thoma's use of official records, exhaustive mining of contemporary criticism, rediscovery of long forgotten works, close formal analyses, and marshaling of existing scholarship renders her account of fundamental art historical importance. At the same time, her comprehensive approach is something of a weakness, as the reader sometimes feels that every critical comment must be cited. An alternative organization and further editing might also have eliminated unnecessary equivocation and repetition of ideas, facts, and anecdotes. To Thoma's very great credit, there are numerous ideas or themes adumbrated in the book - for example, the effect of changes in warfare on military painting, the tension between the timeless meanings expected of history painting and the contingent significance of contemporary events, the aesthetic status of sentiment and sentimentality, and the unstable significance of gender and sexuality in depictions of combat and military life - yet none of these receives full consideration because the basic work of documentation itself is so demanding. In other words, Thoma raises fascinating questions that demand further research. For example, did the Salon and Versailles really constitute the final destination of official painting, or did the growing possibilities for reproduction affect which images were favored by the government? What was really at stake in critics' constant invocation of "truth"? Many questions about the larger visual culture of nineteenth-century France are also begged but not answered. Thoma demonstrates that relatively recent visual technologies such as photography and the panorama directly affected battle painting, and that painting itself, more than ever before, was participating in a visual culture deeply marked by modern, spectacular forms of entertainment, yet the focus of the book is squarely on painting. These questions and criticisms do not change the fact that The Final Spectacle must be read by all serious students of nineteenth-century painting and will, one hopes, lead to further scholarship for years to come.