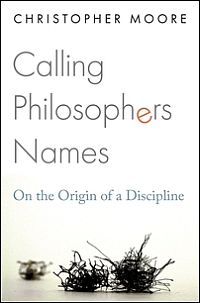 In this book, Christopher Moore offers a novel account of the origins of a practice called 'philosophia' in ancient Greece and traces its development up to the formation of a discipline in the 4th century. By contrast with typical histories of philosophy, which are "internal" to an established discipline, Moore takes an "external" approach and asks why people got called 'philosophoi' in the first place (8). This approach yields a surprising result: 'philosophos' was originally a "norm-policing name" that meant something like "sage-wannabe," a slight against those who strove in an abnormal way for membership in the respected institution of sagehood (1). It was only through a later effort to save the appearances that Plato reinterprets philosophia as the pursuit of wisdom and Aristotle "baptize[d]" as precursors those figures he understood as his forbearers in this pursuit (3).

According to various ancient accounts, Pythagoras was the first to call himself a 'philosophos,' which he defined either as one who spectates the universe, or as a pursuer of yet unattained wisdom. However, the influential work of Walter Burkert has led most scholars to treat these stories as later fabrications: although neither definition is particularly Pythagorean, both are Platonic, and the earliest figure associated with the story, Heraclides Ponticus, was a member of the Academy. After setting out this challenge in the introduction, chs. 2-4 argue that the word 'philosophos' was in fact used of and later appropriated by early Pythagoreans, although it originally meant something very different than later authors suggest.

Moore starts by showing that we can date 'philosophos' to the early 5th century with a convincing argument for the authenticity of Heraclitus B35 as an attack on, rather than an endorsement of, 'philosophical men' for engaging in the prolific research characteristic of Pythagoreans. Ch. 3 then reveals that phil-prefixed terms in pre-classical Greek were other-applied epithets that named, or called out, others' repeated engagement in some social practice non-transparently picked out by the word's second element. Concerning the second element of 'philosophos,' Moore argues that 'sophos' can already be used in the late 6th century to pick out a member of a respected class of sage advisors on matters social, political and personal. It was the suspicious emulation of such sagehood, as Moore argues in ch. 4, that earned the early Pythagoreans the name 'sage-wannabe.' The fact that the earliest mention of a recognized class of 'sophoi' - the "Seven Sages" - occurs in Plato's Protagoras strikes me as a major obstacle to such a view (and occurs, I might add, in a context where Socrates seems to mock Protagoras' dubious genealogy of sophistry (316dff) with his own, arguably equally dubious, history of philosophia (342aff)). I think the indeterminacy of what little pre-Platonic evidence there is for a codified class of sages precludes any decisive conclusions, but Moore is careful not to overstate his case - chapter 3 is appropriately entitled "What Philosophos Could Have Meant."

The following three chapters turn to the development of philosophia in the 5th and 4th centuries. Moore shows that there is already a diversity of meanings for 'philosophia' in the 5X century, and that this diversity is the result of different authors emphasizing different aspects of the originally Pythagorean behaviors that occasioned the term's coinage. This account of diffuse uses in ch. 5 serves Moore well when he turns in ch. 7 to non-academic uses of 'philosophia' - by Phaedo, Antisthenes, Alcidamus, Isocrates, and the author of the Dissoi Logoi - and shows that these authors either adopt earlier uses surveyed in ch. 5, or gradually innovate by emphasizing some feature in the behavior of those already dubbed philosophoi.

The intervening 6th chapter argues that a derisive use of 'philosophos' was prevalent in 5th century Athens. Moore explains the facts that Plato does not regularly call Socrates a philosophos, and that Xenophon (arguably) does not do so, as efforts to distance Socrates from a suspect class of sage-wannabes in Athens, best exemplified (for Plato) by Anaxagoras and his followers. While Athenian perceptions of Anaxagoras as a sage-wannabe complicate the delineation of philosophia in Plato's works, I think we need not go so far as to claim that Socrates is not a philosophos for Plato. We might say instead that it is only necessary to explicitly call Socrates of philosophos in contexts where Plato aims to distinguish philosophy from other intellectual enterprises (rhetoric, sophistry) with which philosophy was conflated - a project that is not at the fore in the dialogues Moore cites as containing no mentions of philosophos-group words (190). Moore's argument emphasizes the Apology, where Socrates distances himself from the catch-phrase slander associated with philosophoi - that they study things in the sky (ta meteōra) and below the earth, do not believe in the gods, and make weaker arguments stronger (23d6-7). Plato surely distances Socrates from this slander, but it is not obvious that he thereby distances him from philosophoi, especially since Socrates is said to spend his life "philosophizing, examining [himself] and others" in the same work (28e5-6). Plato may instead think that these catch-phrase slanders have been illegitimately transferred to Socratic philosophy - thanks in no small part to Aristophanes' Clouds (Ap. 18d1-2; 19c2-6) - because Socrates was mistakenly conflated with figures to whom these labels more appropriately apply, namely, sophists like Gorgias (who attempts to make weak arguments stronger in the Encomium of Helen and On Not Being), Hippias (who lectures on ta meteōra at Prot. 315c) and Prodicus (who is called a 'meteōrosophistēs' at Clouds 360-1), all of whom Plato has Socrates explicitly distinguish himself from in his defense against his slanderous accusers (19e1-4).

The final three chapters of the book detail the formation of a philosophical discipline in the Academy. Moore convincingly shows that Plato's conception of philosophia is much more continuous with earlier views than is usually recognized, and that his innovation lies in rethinking the conditions under which the sorts of conversations that were already called philosophia in the 5X century can be conducive to human flourishing. Although Plato also innovates and saves the appearances with his dubious etymologies of the word, the practice Plato calls philosophia is not something altogether novel. Here too, more emphasis on Plato's educational polemics might suggest a stronger departure. Plato's efforts to demarcate his intellectual enterprise from those of his opponents also seem to play a significant role in shaping Plato's conception of philosophia, and he often articulates the conditions for successfully philosophizing in these polemical contexts. If rivals like Isocrates do not satisfy these conditions (as seems likely based on Plato's portrayal of the Isocrates figure at Euthydemus 304dff), it seems right to say that, although such rivals might be doing something that they themselves call 'philosophia,' they won't be doing so for Plato, because he has arrived at a conception of philosophy that is more restrictive and demanding.

For the notion of a discipline of philosophy, we have to wait for Aristotle, who, as Moore argues in ch. 9, offers the first historically extended conception of a philosophical discipline by christening as philosophoi the predecessors with whom he can fruitfully engage as practitioners of a similar intellectual enterprise. (This chapter, I must add, concludes with delightful reflections on philosophy's need of a history in order to be a discipline, which will provide historians of philosophy compelled to defend their membership in philosophy departments with valuable ammunition.) But Aristotle's valorization of philosophy was not decisive: there remained in the 4th century a diversity of conceptions and valuations of philosophy, ranging from the positive but anodyne (in the inscription 'philosophos ginou,' which, as Moore recounts in a thrilling archeological excursus, can dated to 4th century Delphi) to the positively hostile in various apotreptics to philosophy. This ambivalence about philosophia, which Moore traces in the final chapter, brings the argument of the book full circle by explaining the enduring need for a member of the philosophical discipline like Heraclides to offer a protreptic to philosophy - a protreptic that includes an origin story with hints of philosophia's true origin, tainted though it is with anachronism.