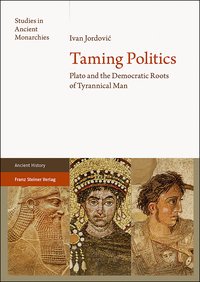 Plato's analysis of the democratic 'roots' of tyranny, as found in Book 8 of the Republic, has been the subject of numerous books and articles over the years. [1] It is therefore highly refreshing to discover that, despite carrying a subtitle that will lead most readers to think of Republic, Jordović' new monograph is in fact primarily concerned with a different dialogue, Gorgias. As the author succeeds in showing, the question about the (causal) relationship between democracy and tyranny is just as relevant in the case of this dialogue as it is in the case of Republic.

Jordović reads the Gorgias as a product of Plato's sustained engagement with the political and intellectual world of fifth century Athens. The main claim of the first, and longest, part of the book, is that the sequence of interlocutors in that dialogue (Gorgias - Polus - Callicles) serves to illustrate, in dramatized form, how 'democratic ideology' is crucial to the development of a distinctively depraved personality type, the 'tyrannical man' (represented by Callicles). Drawing on an analysis of intertextual connections between Gorgias and other sources for fifth century Athens (especially Thucydides, but also Xenophon, Aristophanes, Herodotus), Jordović argues that Plato's portrayal of Socrates' interlocutors serves to link each of them, not only to each other, but also to the ideas and values characteristic of Athens in the second half of the fifth century: arche (empire/domination), self-sufficiency, freedom (including 'freedom to do what one pleases'), shamelessness, and pleonexia ('greed'). As a result, Callicles' tyrannical ethic is revealed to be the result of a gradual radicalisation and inversion of central tenets of democratic - or more precisely Athenian imperialist - ideology. In fact, the dramatic sequence of Gorgias represents not only a conceptual connection, but also a historical development: each of Socrates' interlocutors can be understood to stand for specific periods of late fifth century Athenian political history: Gorgias represents the generation of Pericles, where the rot set in, whereas Polus is linked to Nicias' generation and Callicles to the aggressive and insatiable Alcibiades.

In the shorter, second part of the book, Jordović turns to Republic. He does not offer a close reading of the dialogue, limiting himself to showing how it echoes and develops many of the themes presented in the Gorgias. Importantly, Jordović argues, Plato's preoccupation with the figure of the philosopher-king in Republic should be viewed against the background of the analysis offered in Gorgias: having shown that the tyrannical man is a product and reflection of traditional (democratic) politics, Plato raises the question of the proper education for gifted young people and makes the case for a new kind of politics, as personified by the philosopher-king (and by Socrates). In this way, Plato paved the way for the later genre of 'mirror of princes' literature (Isocrates, Xenophon), which likewise reflected on (ideal) politics through the figure and education of a single ruler. After a brief discussion of Politicus, the chapter closes with a reflection on how Plato's analysis of the origins and character of the tyrannical man can contribute to our understanding of the modern version of 'populism'.

The major merit of the book is to be found in the thoroughness and ambition with which it pursues its original interpretation of the structure of the Gorgias as well as the conclusions it draws from that interpretation for our understanding of the history of Greek political thought. Jordović' detailed and systematic exploration of the ways in which Plato's discussions in Gorgias (and Republic) explicitly and implicitly engage with the author's political and intellectual context contains several perceptive remarks and fascinating intertextual observations. Previous studies have likewise emphasized Plato's engagement with democratic politics and ideology in Gorgias. [2] But Jordović' 'genealogical' reading offers a new perspective on the dialogue, which not only serves to bring together its different parts in an interesting and innovative way, but also makes an important contribution to the history of Greek political thought by showing how Plato's work can be viewed as an important theoretical precursor for later works in the 'mirror of princes' genre.

The flipside to Jordović' ambitious thesis is that it occasionally leads him to overstate his case. A representative example of this can be found in his discussion of Callicles' adherence to the ideal of pleonexia ('greed', 'having more than one's share'), which is taken by Jordović to represent "another testimony of his dependency on Athenian democratic ideology, since the term was closely associated with the expansionist spirit" (105). While it is certainly true that the Athenian arche is often associated with pleonexia in our sources (many of which are hostile to democracy or present a hostile point of view), it hardly follows that every reference to pleonexia is an implicit reference to the Athenian arche. After all, Callicles' own preferred example of pleonectic behaviour is Xerxes' invasion of Greece (Gorg. 483d-e) and (via Pindar) Heracles' theft of Geryon's cattle (484b-c), not e.g. the Sicilian expedition. As Polus' reference to Archelaus (Gorg. 470d-471d) indicates, there were other contemporary models of tyrannical pleonexia available to fifth century intellectuals than the Athenian polis/demos. Something similar can be said about Jordović' suggestion that, in the sequence of Socratic interlocutors, the figure of Gorgias represents "Plato's code for Pericles" (27). Gorgias was a famous person in fifth century Athens in his own right, and he was also crucially a foreigner. There is little reason to think that Plato's readers would have naturally understood him to be a literary stand-in for their own famous statesman, despite the sophist's reference to the dockyards and walls of Athens as being the result of the rhetoric skill of Pericles (and Themistocles). Later in the book, this desire to make Plato's characters fit into a neat generational schema leads Jordović into an unpersuasive attempt to show that it is possible to pinpoint the emergence of Callicles' "doctrine of the right of the stronger" to a specific period after the outbreak of the Peloponnesian war (120-131). This conclusion seems to be the result of taking a view of what qualifies as a comparable formulation of the doctrine that is simultaneously excessively strict (Thuc. 1.76.2-4 is ruled out on the grounds that it refers to anthropeios tropos rather than phusis) and surprisingly flexible (the 'realist' position staked out by the Athenian at Melos, despite its lack of any Calliclean 'idealist' element, is judged to be the only comparable passage).

Despite such instances of interpretative overreach, Jordović' book is a valuable contribution to Platonic scholarship. For those wishing to explore the ideas of Gorgias and Republic in their historical and intellectual context, especially concerning their (possibly intertextual) relation to the portrayals of Athenian democracy in Thucydides, it offers many insights as well as material for thought and debate. For those interested in the intellectual origins of later political thought's preoccupation with the character and education of the ideal single ruler it offers an innovative claim well worthy of serious discussion, namely that it originated in Gorgias, with Plato's reflections on the 'tyrannical' effects of democratic imperialist ideology on the soul of the gifted young of Athens.

[1] Most recently C. Arruzza: A Wolf in the City. Tyranny and the Tyrant in Plato's Republic, Oxford 2019.