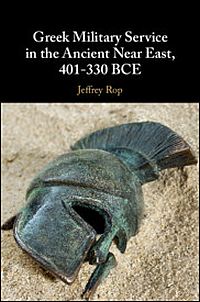 Rop states at the outset (2) that his book has two aims. The first is to argue against the 'Greek Thesis'. From the revolt of Cyrus the Younger down to the fall of the Persian Empire, increasing use was made of Greek hoplites in Achaemenid (and other) armies. The traditional view is that Greek troops were superior both in arms and courage to the Persians. The term the 'Greek Thesis' as a term used to describe this traditional view was first used by Pierre Briant (From Cyrus to Alexander. A History of the Persian Empire, trans. Peter T. Daniels, Eisenbrauns, Winona Lake Indiana 2002, 783-800). Briant argued that while Plato, Isocrates and Xenophon (principally in the final chapter of his Cyropaedia) originated this myth of decadence, the person really responsible for propagating it was Diodorus, relating historical facts in such a way as to give undue prominence to Greek mercenaries and their generals at the expense of their Persian counterparts. Diodorus is thought to have based his account on that of Ephorus, who is known for his anti-Persian bias.

'The second aim of this book is to contextualize Greek military service during the fourth century as part of an international system based on political patronage and reciprocity'. In other words the Greeks in service in the east found themselves there not as pure mercenaries fighting for the highest bidder. They were rather supplied directly by individuals, or city states, in return for some tangible benefit obtained.

The book is organized chronologically. Rop stresses (66) that Cyrus 'trusted the Ten Thousand more than anyone else in his army' because they did not have any other loyalties than to him as their employer. They were recruited in Greece through a network of his guest-friends (xenoi). The other forces at Cyrus's disposal could not be trusted to go over to the King. This meant that Cyrus was forced to accept Clearchus' decision to fight at Cunaxa with his mercenaries' right flank secured by the Euphrates, rather than deploy them against Artaxerxes in the centre (39). Consequently Cyrus lost his life attacking the centre.

Rop's detailed analysis of the historical events covered by chapters 4 'Greeks in Persia and Egypt, ca. 400-360', 5 'The Revolt of Artabazus' and 6 'The Persian Conquest of Egypt' (88-168) is particularly valuable, supported by an impressive bibliography. We are principally dependent on the narrative of Diodorus, and consequently the arguments of Rop, developing the initial work of Briant, are strongest here. In Egypt the Greeks are more valued for their expertise in naval and amphibious operations than as hoplites (18, 115). In addition 'for Nectanebos, their outsider status made them more reliable than his own Egyptian soldiers, whose loyalty he had reason to doubt' (150). So the Greek 'presence is not at all an indication of the inferiority or decline of the armies of Egypt and Persia' (118). It would have furthered Rop's argument if he had mentioned that Egyptian heavy infantry; the Hermotybians and Kalasirians (Hdt. 2.164-8), were a hereditary warrior class, who were given land-lots. The need to cultivate this land reduced the amount of time they were available for service, and therefore increased the attraction of foreign mercenaries.

The second theme of the book is likewise best developed here. No one, to my knowledge, has analysed the mutually beneficial relationship of individual Greek states with the Persian Kings in as much depth previously. We will take the case of Thebes as an example. This city 'became his favoured Greek client after Pelopidas' diplomatic embassy in 367' (126). Consequently Thebes 'received Persian financial backing for the construction of its fleet in 364' (126, 108): possibly supplied indirectly through Mausolus (147 n. 76). Later Thebes' loyalty to the King is displayed by the city receiving money for the war with Phocis in 351, or the despatch of soldiers to aid the conquest of Egypt in 343-342 (145). Similar cases are made for Athens and Lacedaemon receiving financial and political benefits as a quid pro quo for sending troops east for service with the King (or Pharaoh).

Rop claims, with some justification, to have identified (11, 13) two 'literary devices [used] to portray Greek generals and soldiers as superior to their Near Eastern counterparts. Two of the most common tropes are what I call the Tragic Advisor and the Dynamic Subordinate. The Tragic Advisor is a general whose tactical or strategic counsel is unheeded by his foreign commander, with predictably catastrophic results'. 'The second recurring figure is the Dynamic Subordinate, a Greek general or soldier who achieves victory through his own skill and experience, reacting to and overcoming all obstacles that arise in the midst of a campaign'.

In addition, Rop claims, the historical sources have been subjected to 'focalization' (32, 159, 197), a term seemingly invented by M.A. Flower (Xenophon's Anabasis, Or the Expedition of Cyrus, OUP, 2012, 85-89). Rop (32) succinctly defines the technique as 'focusing his narrative on the actions and activities of the Greeks'.

The trouble with applying the techniques of literary criticism to historical sources is that historical sources (at least pretend to) give an account of events which really happened. They should not be treated as purely literary compositions. One lecture I attended in the early 1990s explained the then current trends in American techniques of analysing ancient sources, according to which nothing ever happened in the past, it is all a literary construction.

In my view the over reliance on such techniques mars Rop's treatment of the historical sources in his last two chapters '7 The Greco-Persian Defense of Western Anatolia' and '8 The Fall of the Achaemenid Persian Empire'. Rop (198-9) maintains that 'it seems more likely' that Orontobates, the satrap of Caria was in overall command of the defence of his satrapal capital, Halicarnassus, than Memnon the Rhodian. Likewise he considers that in 'all likelihood' Darius had already begun mustering his army before the death of Memnon. These two assumptions he makes despite clear statements to the contrary in all the sources. Few, I think, will accept Rop's (183-4) down-sizing of the role played by Memnon in the events of the era.

In summary, overall Rop's work is a welcome corrective to the 'Greek Thesis'. However, despite all the reasoning of Rop and Briant, I believe that Greek hoplite equipment WAS superior to that used by their Persian counter-parts. It is most unfortunate that the nature and equipment of the forces of 'barbarian' (Persian) kardakes (211 n.18), or epilektoi infantry (Diod. 16.47.3) which appear sporadically in our texts for the fourth century BC, remain uncertain. Arrian (2.8.6) says the kardakes at Issus were '(heavily) armed men' (hoplitai), and Persians armed as hoplites are shown on late monuments, such as the 'Alexander Sarcophagus'. This evidence suggests the Achaemenids had started to re-equip their infantry in the Greek style. This in turn suggests that, as well as the reasons advanced by Briant and Rop, one reason for the increasing use of Greeks in Achaemenid armies was, indeed, that hoplite arms were seen to be superior to those currently used by the Persian infantry. As to their courage, that is a separate question.