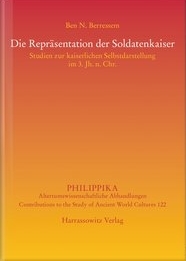 In recent years, representation of the higher class in Roman society, either by portraiture, by ideological messages in architecture or literature, has caught a growing attention in various fields of classical research. Berressem has chosen a subject for his research that fills a gap, as no integrated study of representation in the mid-third century has been undertaken so far, in spite of the burgeoning field this approach towards imperial history has become. Berressem in his study finds that the representations should not be viewed as a monolith, but as a dynamic process in which several succeeding emperors appear to make individual choices for their representation. By approaching 'Die Repräsentation' (the definite article 'Die' contradicts in a way the author's own view) as a multifarious phenomenon, not necessarily connected to earlier stages in history also, he paves the way for analysis of imperial representation in the third century as a field per se.

The development Berressem sees, is a transition from the military portraiture of the soldier emperors of the period between Alexander Severus and Gallienus on the one hand, towards the post-Gallienic emperors up to the pre-tetrarchic reigns. This period is traditionally tagged as the 'third-century crisis', i.e. the period 235-285, a notion that Berressem does not take into account as such, as he is rather interested - and rightly so - in the evidence from this period for his central question. In this respect, he adheres indeed to what has practically become a common view, namely that a 'crisis' can hardly last five decades in a row, and that there must have been an internal strength in political organization, even if problems were rising high. At the same time, having chosen this particular era as his hunting ground, the author tends to isolate the period from the previous and succeeding eras. He is hesitant, for example, to trace back artistic expression to the also rather military regime of the Severans, while the handful of emperors constituting this dynasty may in fact provide solid examples and prerunners for the early soldier emperors (compare, e.g., the 'fierce' expressions in Caracalla's portraiture, suggesting virtue and fortitude and the like, that is not acknowledged as an example for the soldier emperors, p. 301). At the other side of the spectrum, Berressem does see the rise of sacral emperorship under the protection of the gods as a forerunner for the tetrarchic period. Berressem considers the developments in the mid-third century as innovative and novel, and as a new and crucial era for the centuries to come (without elaborating this aspect extensively).

As creative and perceptive this approach may be, so traditional and straight-lined is his view on imperial representation as a top-down affair in which the emperor is the only institute to decide how his portraiture is supposed to be like (departing from the so-called Akzeptanzsystem of the emperors rule vis-à-vis senate, people and soldiery, p. 2). Objections may be made against this view, as not much is known about the way most of the emperors proceeded in imperial representation. Admittedly, the emperors that scaled the imperial hierarchy, normally by aid of their own troops in the era under discussion, were prompt to mint their own coins with a portrayal of their imperial selves, once they ascended the throne officially (still, in principle, by a senate's decree). This indeed does suggest a kind of auto-representation, but at the same time, traditions existed to guide their choices, and often swiftly changing circumstances in which the individual emperors could hardly design an overall representational program. And in how far did imperial mints have any freedom in deciding what message fitted their commissioners best? Even if the answers are hard to give, a discussion at least could have shed further light on the questions. Beginnings of an answer can also be sought in the combination coin types, series and slogans in combination with the iconography that can be found on the coins, but the author rather mainly sticks to the portrayals themselves (iconographic, not ideological). No use of statistics as regards frequency of coin types is made either, as a result of which the randomness of the pictorial database is hardly clear (the attached catalogue entirely depends on Delbrück 1940).

A second surprising aspect is the heading of buildings and architecture under the chapter of imperial (self-)representation (for Berressem, there is no real distinction between self- and other kinds of representation, p. 8). In some instances, structures certainly do add to the imperial ideology of the emperor under whose protection they were built, as for example the templum solis of Aurelian, however difficult it is to get some grip on this monument (the location, the building circumstances, etc.). In other instances, for example the building of domus (or imperial villas) one might ask how it relates to self-representation, especially when only written sources are available (for example the Historia Augusta, of which Berressem acknowledges the weak spots, but does not therefore take refuge in the Budé-series in which most of the discussed passages are discussed - so that elements, on p. 102-3 from the Probus-biography for example, are treated as if they were authentic). Also, it might often been asked whether evidence from archaeology and textual sources may be compatible at all to create a picture of imperial self-representation. Study of different media often lead to different conclusions, so has been experienced frequently. The attempt for an integrated approach may be appreciated, although again a discussion about the methodological aspects lacks in details.

These objections left aside, the book does provide a very rich palette of discussion of individual objects, buildings and coins in particular. The catalogue of imperial portraits for each individual emperor, with description of the characteristics and references to literature, is an asset in this study. The bibliography is vast, although further use may have been made of studies that transcend the discussed period, that might have enriched the study methodologically. Many of the questions are also posed for, e.g., the fourth century, approaching large public structures as Erinnerungsplätze, rather than imperial self-representation. Such a comparison would be more than just another approach, as it might sharpen the view on the research questions, by putting them in a broader framework. [1] The Aurelian Wall, for one, is a large public structure, that either expresses the emperor's will to defend the empire (and, with the augmentation of the pomerium, to enlarge the empire) and symbolizes in a way the common good of the people. An 'Erinnerungsplatz' that also might be seen as a way of self-expression (as Berressem does, p. 96).

Furthermore, the book is valuable for discussion of status quaestionis, as Berressem clearly put a lot of effort in elucidating individual positions and conflicting opinions. The index on 401-3 is shorter than should be wished for: how practical it would have been to also find terms like restitutor, Invictus, gravitas, etc. summed up. Combined with the vast and well-disclosed documentation in an understudied field, Die Repräsentation der Soldatenkaiser is a welcome research tool and worthy addition to the growing field of representational studies.