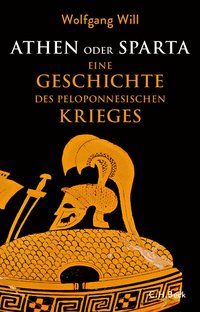 The Peloponnesian War and its account by the Athenian Thucydides has long been influential. At a press briefing, US Secretary of State Henry Kissinger once explained the Cold War in Thucydidean terms - it was a conflict between an Athenian US and a Spartan USSR. A clever American journalist queried, "Does that mean we're going to lose"? Titled Athens or Sparta (no question mark), Wolfgang Will's volume and its six narrative oriented chapters conclude with Athens' collapse in 322 BC before a Macedonian advance that seems rather peripheral to the subtitle of "Peloponnesian War." No less, a declining Sparta had hardly figured in affairs for forty years: Spartan pretensions amused both Philip and Alexander of Macedon. While the "Wars" and their authors are discussed, a reader today might wonder why a statesman like Henry Kissinger would resort to analogizing "Athens vs. Sparta" as a figure of speech.

Thucydides, in fact, has long held an authoritative niche in the thinking of Anglo-American political strategists and intellectuals. His doctrine of Realism - that human affairs are dominated by the pursuit of power, that cooperation and peace are illusory - continues to attract attention. A study by Graham Allison, Destined for War: Can America and China Escape Thucydides' Trap? (New York, 2018), is just one recent Thucydidean pronouncement that could be cited. This pessimistic outlook is commonplace and others from Thomas Hobbes to any one of several twentieth-century dictators would endorse this verdict as a true picture of human interaction.

This can be seen many times over in these wars that consumed the Greeks. Pericles wanted war with Sparta and the Athenians gave him the votes he wanted. Even after it came to ruin with military setbacks and disease the policy persisted. Most famously, this led to the Athenian destruction of Melos (416 BC), which demonstrates the warlike impulses of a democracy driven by the pursuit of power, a lesson for the ages. The famous "Dialogue" that Thucydides composes - "the strong do what they have the power to do, and the weak suffer as they must" - illustrates this as does his conclusion to the affair. The general Philocrates concluded the mopping up of Melos and Thucydides identifies him, unusually, noting that he was the son of Demeas. Greek society was an oral society and "books" were recited more than read: an auditor might have heard in the names words meaning "Lover of Power, [son] of the People." Perhaps Thucydides intended this as subtle political commentary. Attentive Athenians (and others since) might have heard an eternal lesson. As the Spartans closed in on Athens ending the war, Xenophon reports that many within were filled with dread, expecting retribution for the bad things done in the name of power and wealth.

Wolfgang Will approaches the Peloponnesian War through the words of its most famous author and others including his editor-continuator Xenophon. But too often there is little supporting explanation or analysis of these sources. Such criticism may seem severe, as the volume appears to be aimed at general readers and students. Yet writing today about war and violence is so critical that it demands up-to-date discussion. In short, the issue broached here is one of methodology: to restate Thucydides (and others) or elaborate their accounts from the perspective of contemporary learning?

The commentary that follows is elaborative rather than corrective, and accepts that Thucydides deserves his place in the development of historiography and that other writers cited are no less valuable. At the same time what these tell can be better appreciated from the perspective of modern science including biology and psychology. Not only does this allow, for example, for a clearer understanding of the devastating plague that struck Athens (c. 430-427 BC), but how the violence that constitutes war, any war for that matter, drags people down, as Thucydides says, and rightly, to the level of their circumstances.

Will's account of the "great" Peloponnesian War, really the main focus in this volume, follows its course chronologically, beginning with the "Archidamian" or "Ten Year's" War (431-421 BC), the era of the "Peace of Nicias" (421-414) to the "Sicilian Expedition" (415-413), and the concluding "Ionian War" (414-404). The primary subject is war, battles, generals, and soldiers, but the results of this are too often sanitized. It needs remembering that war means fighting, and fighting means killing.

The consequences of this were significant for the small communities comprising the Greek city-states. Editorial limitations allow but a single example. At the battle of Delion (424 BC), of some 7000 Athenian soldiers (hoplites) fighting, nearly 1000, or 14%+ were killed, and this in one day: as many as twice that (= 28%) would have been wounded (and probably more, these almost always outnumbering the dead) for a total of 42% - nearly half - of the entire force engaged. These are staggering losses: 7000 men represented nearly half the total of soldiers fit for service. Imagine the impact of all this upon the families of these men and the small community that Athens was where kinship ties were close. There were other (and greater) losses of life in this war: thousands of men from Acarnania in a matter of a few days (427 BC); the male citizens of Melos killed by the Athenians in battle or slaughtered on surrender (416 BC); thousands of Athenians (not to mention allies) lost in Sicily (415/13 BC). The catalogue of death is long indeed.

How this might have affected those trapped in a world of violence receives little notice. Sometime during the "Archidamian" phase of the War, Gorgias of Leontini (Greek Sicily), the famous rhetorician, traveled to Athens on a diplomatic mission (c. 420s BC). His presence clearly sparked interest in this era of the Sophists and Socrates sometimes dubbed the "Greek Enlightenment." Invitations for symposia followed, and on one occasion Gorgias delivered The Encomium of Helen. This was a rhetorical showcase that aimed to acquit the notorious Helen of responsibility for igniting another big war, the Trojan. In the course of his speech, Gorgias presented an argument based on sight to support his thesis. He pointed to the fearful prospects of battle and how the mere sight of weapons resulted in physical and psychological distress: some men became so disturbed by the experience that they fell ill, others became unable to work or resume life's routines (Helen, 16-17). Only in the last forty years has this condition been identified as PTSD, or post-traumatic stress disorder. While Gorgias is likely the first to recognize this now familiar response to trauma, he was certainly unaware of the science, the biology and neurology, that produced it.

These wartime shocks disturbed others too, among these the noted playwright Euripides. Early on a supporter of war against Sparta, if his drama Andromache is any evidence, by its midterm he has realized its folly. In the Heracles, the greatest of Greek heroes returns home not from his famous labors, but from "war" (or polemos, mentioned three times in eleven words, lines 1133-1134). Violence unleashed, he slaughters his own family. Snapping out of his "madness" he ponders suicide, dissuaded only by the counseling of another survivor of violence, Theseus. Acts of domestic violence, suicide and suicidal thoughts, are frequent symptoms observed in PTSD, and these are typical among those exposed to war's terrors. Examples through time and place are easily found.

Thucydides tells how the Greeks fought, and Gorgias and Euripides complement his telling, showing how this consumed the Greeks. He was also a careful writer possessing keen talents of observation, and probably there is no better example of this than his account of the plague that devastated Athens (430-427 BC) killing and sickening thousands. While his suggestion of African origins for the plague may reflect popular belief, it is his technical and medical like descriptions that have inspired scholars to offer a wide variety of diagnoses.

These earlier arguments are likely now obsolete. In the mid-1990s, workers excavating the Athens Metro uncovered a plague era burial pit. DNA studies of the teeth of some of these dead revealed the bacterium Salmonella enterica servovar Typhi, or enteric typhoid fever. Water contaminated by human feces spreads this disease (it happens with some regularity in the US even today) and it can be transmitted to others. On the war's outbreak the Athenians had evacuated their rural population into the city. Now jammed together, cooking and eating, these managed to contaminate their own water supply, unknowingly, and so made themselves sick. Without antibacterial drugs, they were doomed to the hard deaths Thucydides describes. Why it stopped is difficult to say. Perhaps better hygiene began to be practiced, accidentally, and with fewer citizens - the plague having taken many - this might have been enough.

Modern day biological sciences and neurology can complement the story of war that these Greek voices tell, if they are brought into the investigation. Thucydides could not have known about germs and germ theory, only discovered in the nineteenth-century; though Euripides and Gorgias could observe what the experience of war can do to humans, they would not have understood the neurological and psychological disorders manifested, these only recognized with the aid of modern biology and brain scans developed in the 1990s. Yet with these scientific advances the story of the Peloponnesian War (or Wars) becomes more human. As the gap between Past and Present narrows, so do the barriers that seemingly separate the family of humankind.