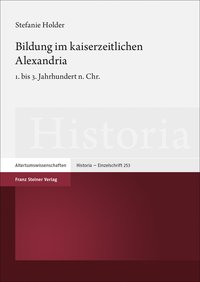 This book by Stefanie Holder is a revised version of her doctoral thesis as part of the Courant Research Centre 'Education and Religion' in Georg-August-Universität Göttingen. It looks to fill a gap in scholarship by focusing exclusively on the education environment in Alexandria over the first three centuries CE. This is not an easy undertaking as the surviving evidence from which to construct a thesis is fragmentary, has disputed attributions, and has not been previously gathered. Moreover, the high level of mobility within the Empire, and the challenge of differentiating influence of in-person teaching verses written work, undermines our confidence of what we can call 'Alexandrian', as Holder rightly notes.

The first main chapter, 'Bildungsbegriff: Systematische Grundlagen' (23-78), clarifies what 'education' is in both modern and ancient usage in order to gain a systematic approach from which the Alexandrian educational establishment can be represented. For this, Holder draws deeply from texts across the Empire to collate various positions and evaluates Alexandrian similarities and differences.

Chapter two, 'Bildung in Alexandria: Die Funktion des Museions' (74-224), evaluates where and how education could be acquired in Alexandria, for which Holder evaluates the role of the Museion. In particular, Holder investigates the nature of the Museion and identifies in chronological order possible members of this institution (scholarly and, especially, non-scholarly) and what we know about them. Holder highlights the limits of our evidence and cautions against making sweeping assumptions. This chapter represents a substantial amount of work and will be invaluable for any future study on the topic.

In chapter three, 'Der Zugang zu Fächerwissen und dessen soziale Funktion' (225-246), Holder covers the relationship between the city of Alexandria and the chora, arguing that a strong division between them is problematic as many of the wealthy urban elite had holdings in the surrounding countryside. Holder also argues that the structure of exemptions in other parts of the Roman Empire would have been applied to Alexandria as well.

Chapter four, 'Das Verhältnis der Bildungsfächer zueinander' (247-357), examines the integration between grammar, rhetoric, philosophy and sophistry. Specifically, Holder provides a series of case studies to explore the diversity of perspectives: Apion, who was influential in grammar, rhetoric and sophistry; Philo, who differentiates philosophy from rhetoric and grammar in his interpretation of Jewish Scripture; Aelius Demetrius, a prominent Alexandrian rhetor from the second century CE; and participants of the Second Sophistic, which had a profound influence on education within the Empire, but also, Holder argues, a presence in Egypt.

The final chapter, 'Παιδεία τού έλευθεϱίου und politisches Handeln' (359-448), evaluates education within the political sphere, how it was applied in the political life and how educational ideals were invoked in conflict. Holder provides a detailed discussion of the Acta Alexandrinorum, anti-Roman propaganda in which educated Greek individuals rebuke Roman tyrants.

The work contains one appendix of documented members of the Museion and two helpful indices (ancient names; subject). Absent is a primary source index.

This is a technical work that demonstrates a wide mastery of primary sources. Of particular value is Holder's engagement with epigraphic and numismatic material in addition to that of ancient authors. Excerpts from these are given in their original languages in the footnotes, which is a very helpful resource for the reader. I appreciate Holder's decision to challenge the prevailing scholarly view that the Roman period was a period of decline. In particular, her resistance of negative evaluation is refreshing and frees her to make positive evaluations about changes and inventions. Holder also challenges the view that the shift to the Roman era resulted in substantial discontinuity; a position that allows her to see elements of continuity and development. Both of these correctives are beneficial and will allow for new research trajectories.

Holder, although recognising diversity of ethnicities and cultures in Alexandria in this period, limits her attention to Greek paideia: Greek people and those who engaged with Greek learning (14). This is a reasonable limitation given the scope of the project. One hesitates to suggest a big book should be longer. However, I was hoping that Holder would have engaged with other education systems present in Alexandria, especially Egyptian (there is some discussion of Latin education). A counter to this could have been offered for Apion or Philo of Alexandria, authors who receive substantial attention in this work. For example, Holder rightly views Philo as receiving a sophisticated Greek education. However, she risks downplaying his Jewish ethnicity by not exploring how Philo might have been influenced by Jewish thinking from those whose language of study was not Greek (i.e., Hebrew and Aramaic) or Jewish-Greek education from alternate sources (e.g., Septuagint). This is a growing area of study in Philonic scholarship and I was hoping that Holder would have developed this debate in light of her findings.

Despite this (mild) critique, Holder's book represents an important advancement in our understanding of Greek-Alexandrian education during the first three centuries CE. This detailed work will need to be consulted in future studies and warrants a place in personal and institutional libraries.