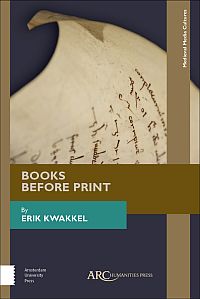 Out of the gate, Eric Kwakkel defines his jaunty tour of medieval manuscript materiality as an introductory tool for courses in History, English, Medieval Studies, and Book History (xix). With the author's deep field experience and archivist's sense of discovery suffusing every page, the book is indeed a convivial invitation for students - in both academic and non-academic spheres - to approach manuscripts as vectors of medieval cultures of writing and reading. In 32 pithy chapters born in his lively blog, "medievalbooks.nl," Kwakkel moves from the composition of written text and mise en page outward to the functions of binding and decoration, then to material evidence for active reading practices - annotation, book-marking - and points of broader book culture, including storage, library organization, travel, damage, and repair. Kwakkel visits a variety of manuscript formats, both for bound codices and for other, more flexible "bookish objects." He pays particular attention to the strategies developed to support the use of books for people's intellectual practices beyond reading, such as calculation or telling time.

Three signal aspects define every chapter. First: the photography throughout the book is wonderful, full stop. It is well worth noting how rare it is to see manuscripts reproduced at angles other than a frontal view, in light that does not flatten them. This in itself constitutes a core argument of the book: the vivid, informal, but highly communicative photography enacts at every turn the materiality and immediacy emphasized in the text (tellingly, the author's camera gets a credit line). The selection of examples is dazzling and Kwakkel's light touch belies the trenchwork behind it; the corpus assembled and documented here is the greatest gift of the publication. Second: the material objecthood of manuscripts, their connection to the people who made and used them, and the reciprocity of their forms and functions all remain steadfastly front and center. Third: Kwakkel keeps his vocabulary relentlessly connected to the contemporary language of information technology, and his rhythm in the swing of the blogosphere.

The end result lands the colleague reviewing from a home-field perspective in a rather curious spot. On one hand, facets of the work seem to call for a disciplinary Gebrauchsanweisung. It is good to be clear that Books Before Print is not a history of medieval book-making (nor does it ever claim to be); and also that, pace several particularly effective early medieval examples, its heart lies in the later Middle Ages. As the author himself would surely be the first to own, in a Medieval Studies or Manuscript Studies course, Books Before Print could be an energizing starting point for various lines of study but it could never stand alone. The glancing treatment of each generative topic seeds a spectrum of ways to think about medieval material, but for fully historicized or more technically detailed study the book requires robust backup - in many cases readily provided by a title from Kwakkel's resource bibliography. However, to teach a number of the themes Kwakkel shrewdly raises, but in specific historical perspective, one would need an entirely different bibliography and/or lecture framework. Iconoclasm offers one concentrated example here (not all erasure was "prudish" [129]); while complex exploration of the nature and function of images in books, including their relationships to text, requires supplementation on the scale of art history, tout court. Similarly, worlds of inquiry based in social history could be built from student queries sparked by Kwakkel's championship of manuscripts as both witnesses to and agents of culture.

That said, it barely makes sense to raise such cautions, because the work's contribution as a textbook is arguably not at peak strength in a strict Medieval Studies context in the first place. Everything above will be evident to anyone teaching from a medieval field, just as Kwakkel himself did not set out to write the kind of book that would make such elisions actually problematic (one exception being a quibble I might offer on behalf of the ladies at Kitzingen, Chelles, Essen, Admont, and Rulle, among others: having eschewed much specific contextualization in favor of introducing a wide palette of bibliophenomena, to my mind it actually becomes less defensible to concede a default male gendering of scribal practice "for convenience" [6]). Medievalist colleagues will gauge for themselves what the micro-essays can and cannot do as teaching supports; this will always be a matter of course range and personal style.

In aggregate, the collection invites a different conversation - one that is not strictly defined by Medieval Studies, and one that finds a key contention in the book's very existence. In the Epilogue, Kwakkel gets to brass tacks and articulates the spirit of advocacy in which Books Before Print is written. "The chapters in this book show that human beings' interaction with written information has deep historical roots," he says, having proposed that the manuscript book be understood as the "precursor of our modern 'information society'" several lines before (251). To my mind, the force of Kwakkel's analogical bent is not so much to make the past relatable to contemporary students, but to ensure that the past remains part of the contemporary conversation about forms and media of knowledge and communication. Some equations seem too flip (is a scribe's self-promotion really "spam"?) but their resulting disjunctions are telling, and pose pressing questions about how written media both shape and have shaped the ways we act, think, and communicate - and, no less, questions about how we can characterize continuity between the present and the past. As such, the book's place in a series on "Medieval Media Cultures" also spotlights a query about disciplinary reciprocity more serious than Kwakkel's easygoing tone might imply. Ask not what media studies can do for the Medieval, but what the Medieval can do for media studies.

Kwakkel poses one juicy question at the outset whose answer remains largely implicit and mutable: what is a book, in point of fact? The initial discussion proposes a somewhat uneasy identification of "book" and "codex," which subsequent chapters proceed usefully to complicate. But Books Before Print itself mirrors the question Kwakkel poses to medieval manuscripts of varied form and function. Why is Books Before Print a book at all? In some respects, the work fights the form: the language ensures that the originary blog courses through the text like a palimpsest, and in certain places the restrictions on reproduction in a printed/e-book context palpably clip its wings. The converse, of course, is that the ordering and apparatus proper to books give back to the contents something powerful that the blog format denied. Meanwhile, the varied possible physicality (and attendant cost) of the publication enacts a version of Kwakkel's fundamental call to recognize that verbal and visual contents are distinct from their material media. When you fuse contents and medium, you can have yourself a book - a technology still well worth making.