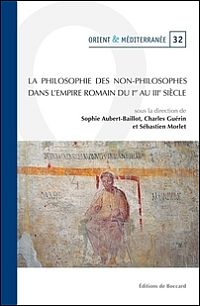 In the High Roman Empire, philosophy was not confined to professional specialists, or even the persons claiming to be philosophers whom others derided as charlatans; it was a matter that seriously engaged many other people. This engagement is the subject of the fifteen essays in this volume, preceded by an avant-propos that problematizes the distinction between philosophers and non-philosophers, a philosophical problem in itself; the specific cases discussed are Galen and Justin Martyr, who may fall on either side of the line but appear from their exclusion to have been classified as philosophers along with the far less significant Favorinus, whereas Calpurnius Flaccus is so much of a non-philosopher that the first contributor, Andrea Balbo, "Les composantes philosophiques des excerpta de Calpurnius Flaccus", has a hard time finding any such components beyond a few references to the sapiens, a smattering of natural philosophy in Decl. 2, and topics handled by both philosophy and rhetoric but the property of neither.

Some chapters seem too short: Nicolas Lévi, "Ovide et la notion philosophique de lois de la nature", shows how the poet, drawing on many philosophies and beholden to none, envisages a nature ordered by a principle of separation and differentiation, but has no room to contrast this Ovidian system with the poetically beautiful but philosophically incoherent utterances of Vergil's Silenus and Anchises. Carlos Lévy, "Philosophie et témoignage chez Philon d'Alexandrie : la question du corps", shows Philo reconciling Greek philosophers' disparagement of the body with the goodness of all God's creation, and facing Gentile scorn for, and persecution of, the Jewish body, which must bear witness to man's capacity for returning to primeval chaos, but lacks the space to explain how he should share 'la conception juive du péché originel', unless it be his account of the Fall, without the Augustinian implication of the phrase.

Longer, and all the better for it, is Mélanie Lucciano, "La métaphore de la cire: réutilisation d'un motif platonicien (Théétète, 191-195) à Rome"; she examines first the use or rejection of the metaphor in philosophical writings down to Cicero, then its very different treatments in Roman rhetorical mnemotechnics and in lay literature. Even longer is Ermanno Malaspina, "Euphratès, Artémidore et ceux qui sapientiae studium habitu corporis praeferunt (Ep., I, 22, 6): la place de la philosophie dans la culture de Pline", explains by Pliny's belief in temperamentum his lack of emphasis on philosophy even when it might have been expected, and firmly rebuts attempts to make a Stoic out of him despite his admiration for certain Stoics.

So far all chapters, even those by Italians, have been in French; now come three in English. Joanna Komorowska, "Fate, Knowledge and Demonic Protection: Philosophy and the Astrological Work of Vettius Valens of Antioch", illustrates Stoic and Middle Platonic elements in Vettius' theory of astrological enlightenment. Apuleius, being a philosopher, would seem ineligible for inclusion in this volume, but Emma Ramsey, 'Apuleius Philosophus Platonicus? Apuleius' Self-Presentation in the Apologia", catches him evading in the Apology the title of philosopher (though not of Platonist) lest he offend listeners with a low opinion of the profession; one might wonder whether Maximus might rather have deemed him unworthy of it. Alessandro Garcea, "Nec ignara philosophiae: Imperial Logic and Grammar in the Light of Gellius' Noctes Atticae", examines Gellius' views on grammatical correctness (in which morphology matters less than semantics) and logic (against whose attractions he follows Epictetus in warning).

How much discipline was imposed by the editors on chapter-length I do not know; I wished that some contributions were longer, none shorter. Some include numerous ancient quotations, others few; they are presented in the original, in translation, or in both as the contributors saw fit. The production of the book is attractive, though I have noted occasional misprints even in French: "Le nature" (59), "qu'à Dieu" for "qu'a Dieu" (247), perhaps a hypercorrection. Although one might have welcomed a short conclusion, not summarizing the individual chapters but setting out the similarities or differences between their subjects' dealings with philosophy, all in all, this is a valuable overview of its topic.