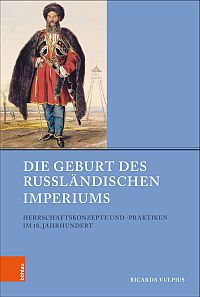 How did Russia become an empire? This vital question implicating early modern and modern historiography maintains its relevance still today. A compelling account in answer to this persistent question is provided in the study by Ricarda Vulpius, based on her habilitation (post-doctoral dissertation) at the Ludwig Maximilians University of Munich (2018). The extensive volume consists of an introduction, three analytical chapters, and conclusion, supplemented with a bibliography, personal and geographical indexes, maps, and illustrations.

The study draws on distinct genres of written source materials: legal acts, official reports, correspondence, diaries, memoirs, and chronicles. While the exclusive use of published editions of these sources does not present a disadvantage in itself, this method could however affect research results. Even if published sources provide plenty of possibilities to analyse the concepts of power, they can help in the reconstruction of the practices only to a limited extend. Moreover, that Russian editions from the times of the Empire were censored and compiled according to the imperial principles renders their reliability questionable. Vulpius noticed this problem, but did not take the consequences into full account. Regardless, the corpus of analysed sources is extensive, as is the scientific literature employed. The author deftly synthesizes the literature on the subject, foremost, in Russian, German, and English.

The title is slightly misleading. One may expect the analysis of all concepts and practices that the Russian State employed in the eighteenth century towards its diverse subjects in various territories. In fact, Vulpius focuses on southern and eastern lands: namely, the steppes of south-eastern Europe and central Asia, Siberia, and Alaska. According to the author, the conquest of these territories and the subjugation of its Muslim and pagan nomadic inhabitants were key processes that made Russia an empire - a diverse, multi-ethnic polity. Throughout the book, Russia is constantly compared with western European colonial powers in order to examine the claims about its Sonderweg. The author points out numerous similarities and states that Russia had been an empire de facto already before the eighteenth century (from the capture of Kazan and Astrakhan in the middle of the sixteenth century), but it was Peter the Great's breakthrough to inaugurate a colonial policy. She even claims that the central thesis of her book is that "das Russländische Reich [sich] ab dem 18. Jahrhundert in der Herrschaft gegenüber seinen nicht-christlichen Untertanen mindestens phasenweise von einem Imperium zu einem Kolonialreich wandelte" (193). The fundamental factor for this change would be the implementation of western-European Enlightenment discourse of superiority over the 'uncivilised' peoples.

The study begins with an introduction containing remarks on the topic of the book, terminology, methodology, and the state of the art. Two following chapters introduce the key concepts of Russian imperial and colonial policy, service, and hostages-keeping (amanatstvo), discussed in a wide chronological perspective of the history of the Muscovite/Russian state. From the sixteenth century onwards, an oath established personal relationship between members of indigenous elites and the tsar (service), combined with an obligation to pay tribute and provide hostages. Taking locals as hostages has long served as a tool and symbol of sovereignty in many parts of the world. Rejecting the claims of Mongol influence, the author argues that hostage-taking among Eastern Slavs dated to the times of the medieval Kyivan Rus. In eighteenth-century Russia, this old practice gained a new dimension along with the concept of' 'civilising' those providing hostages. The authorities started to christianise the hostages, teach them the Russian language and customs. After returning to their fellows, they were to become the models of civilisation. However, in most cases, this idea remained idle.

A confrontation of various concepts and practices of civilising and inclusion constitutes the central part of the book. The great advantage of Vulpius's transregional approach is that she compiles data regarding various peoples and places, thus providing a broad panorama of Russia's activities on different frontiers. Vulpius begins with an accurate analysis of the crucial terms of civility discourse. Here, as well as in other parts of the book, the author makes profitable use of Reinhart Koselleck's Begriffsgeschichte or conceptual history. Russian terminology reflected ancient and medieval tradition (varvary, prosveŝenie, dikost), as well as the influences of the Polish-Lithuanian Commonwealth (političnyj, ljudskost) and western-European French-speaking Enlightenment (civilizaciâ). The building of lines of fortifications constituted the main tool of subjugating the Kazakh steppe that acted as transfrontier (as called by John LeDonne) between Russia, China, Iran, and Dzungaria. Contrary to most strongholds of defensive purposes, these Russian outposts were designed for expansion, incrementally dividing and encircling Kazakhs, Bashkirs, and other nomads.

Another sphere of state activity was religion. Until the eighteenth century, attempts to Christianise Muslim or pagan subjects of the tsar were episodic. From the reign of Peter the Great Russian authorities adopted missionary attitudes and (ineffectively) promoted conversions among the Tartars, Kalmucks, and in Siberia. Christianization was an element of a wider civilisation and unification campaign, summarised in an evocative equation: "Christianisierung bedeutete Bildung, Bildung bedeutete Zivilisiertheit, und Zivilisiertheit bedeutete, Russe oder Russländer zu werden" (313). Moreover, civilisation was connotated with a permanent settlement. Russian officials tried to encourage or force Kazakhs and Kalmucks to settle and cultivate the soil. The failure of these attempts led to settling Russian peasants in the steppe. An idea to 'civilise' land when its inhabitants resist was shared by Russian authorities and western Europeans acting in America. Analysing the transformation of indigenous structures of power, the author shows a common three-stage pattern based on Russian experiences with the Cossack Hetmanate in Ukraine. First, Russia supported one member of the local elite, making him a single ruler dependent on Russian financial and military aid. Then, in the second stage, Russia weakened him and placed itself in a position of arbitrator between the rivalling pretendents, according to the old rule divide et impera. The growing dependence made it eventually possible to exchange traditional structures with Russian law and administration. Although successful in terms of political expansion, this strategy led to strong resistance and loss of the subjects during Kazakhs' and Bashkirs' uprisings and the tragic exodus of Kalmucks to Dzungaria.

In order to gain the loyalty of its new subjects, Russia widely practised administering gifts to rulers and indigenous elites and overwhelming them with costly homage ceremonies. Katherine the Great noticed also the potential of the multi-ethnic and multi-religious character of her realm for propaganda, and she started to involve non-Russian representatives in St. Petersburg festivities. Another novelty was an attempt to use Muslim clergy as agents of education, treated like Christian ministers in enlightened Europe.

Vulpius concludes that the shift in Russian policy towards civilising and assimilating nomads resulted from the introduction of Enlightenment thought initiated by Peter the Great. Since Russia joined the family of 'civilised nations', it should also share the mission of civilising the 'uncivilised' others, acting as Kulturträger. Therefore, Russia became a typical colonial empire, characterised by a deep gap between progressive expectations and harsh reality. While it must be noted that this conclusion is not the most original, the thesis is nonetheless well-documented and convincingly presented with some novel additions, foremost in the field of conceptual history.

Unfortunately, the graphic material does not share the diligence of source analysis. The illustrations and maps were copied from older literature, and they do not necessarily correspond with relevant passages of the text. There are only six schematic maps, prepared quite surprisingly not in German, but in English. The story of conquering the spaces of Central-Asian steppes and Siberian forests could only profit from using historical maps and preparing detailed cartographic depictions of the events and processes analysed.

Understandably, a study of a state policy builds on the sources produced by the state itself; however, including the perspective of Bashkirs, Kalmucks, Kazakhs, and peoples of Siberia and Alaska would enrich the analysis. Furthermore, to reach the scope of work signalled by the title, it would be necessary to consider the Russian state's attitude towards its native Russian subjects, as well as to the newly annexed territories in the west: the Baltic provinces and lands of partitioned Poland-Lithuania. However, these are rather ideas regarding further research and not criticism of nevertheless extensive work. Vulpius's study provides a very solid and persuasive depiction of the official concepts and practices that contributed to making Russia what we know today: a multi-ethnic entity of imperial politics.