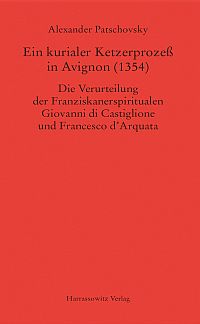 Scholars of late medieval heresy are acutely aware that there is a wealth of sources that are hardly known in the archives and libraries. Unfortunately, common is also the situation when, in the lack of proper critical editions, generations of scholars refer to partial and flawed prints and editions. Alexander Patschovsky aims to remedy such a case with his edition of the heresy process against two Spiritual Franciscans in the papal court at Avignon in 1354, so far available to scholars only as a partial edition in Ignaz von Döllinger's Sektengeschichte II (1890). Patschovsky himself had referred to the material already in 1974, and 44 years later the edition finally saw daylight.

The case itself is peculiar among medieval heresy processes, which rarely took place in the papal curia and were instead delegated to inquisitors of heresy, or remained a bishops' responsibility. It seems that in this instance, the curia took the initiative and made the inquisitor of Carcassone transfer the case to Avignon. According to Patschovsky, the probable reason was the highly political nature of Franciscan poverty at the time. On the one hand, the papacy sought to impose its authority over the divided but influential Franciscan order and reconcile its radical elements when possible. On the other hand, the particular case of Giovanni di Castiglione and Francesco d'Arquata had concrete implications against Louis of Durazzo. In the 1350s, Louis was a leading figure of the Durazzeschi opposition in the war-ravaged Regno. Louis himself would face heresy accusation as a protector of the Spirituals in 1362, and Francesco's confession revealed his familiarity with Louis. Despite being a rebel and familiarising with known heretics, Louis of Durazzo had connections right to the top of the curia, as his maternal uncle was Élie de Talleyrand, the cardinal protector of the Franciscan order. Hence the exceptional interest on behalf of the pope and his curia (16, 20-21).

The introduction provides the reader with a detailed description of the process, background, and context (2-22). A summary of the two Franciscans' fate is in order, as it is a story that could well inspire a novel or other works of fiction. Giovanni and Francesco were on their pilgrimage to Santiago de Compostela, on a route through Midi, when some servants of the inquisitor of Carcassonne caught them in Montpellier. In their possession, they had a little book (parvus libellus), which contained their declaration of faith and a list of martyred Spirituals. In other words, a damning piece of evidence in the eyes of inquisitors. They were questioned in Carcassonne in 1353 and held in very harsh conditions, forcing Francesco to recant and abjure. For reasons explained above, the papal curia ordered the transfer of the two accused to Avignon, and Innocent VI entrusted the matter to the Cistercian Cardinal Guillaume Court in spring 1354. The cardinal questioned both men on multiple occasions, and the process gives the impression that he genuinely tried to make them recant and save themselves.

I agree with Patschovsky that the process's goal was conversion and reconciliation, not the destruction of these heretics (21). But unlike Patschovsky proposes (13, 19), in my opinion, even Francesco d'Arquata, who had abjured heresy and relapsed, had the possibility to survive the process. Although according to the law relapsed heretics were condemned to death, mercy in such cases was not entirely unheard, and the irregularities in the Carcassonne process could have provided a legal basis for declaring the previous abjuration invalid. The conversion in a high-profile trial would have been more valuable than yet another executed Spiritual. However, reconciliation was not to be: both men were steadfast in their faith and met their fate burning at the stake.

As one can expect from a leading scholar of the field with decades of experience on editing medieval sources, the introduction also gives a detailed description of the surprisingly broad manuscript transmission of the process material (26-39), a summary of its contents (39-43), critical remarks on the transmission history (43-44), and ratio editionis. The edition is a Mischtext that considers the whole manuscript tradition but prefers two manuscripts (London and Vienna) with the best textual quality (44-47). The actual edition takes about half of the volume's length (51-125). The critical apparatus of variant readings is rich, and ample footnotes comment the Latin text. A detailed index is a valuable asset an adds the usability of the edition.

The publication of the edition was timely. In fact, so timely that almost simultaneously with it, two excellent articles discussing related themes came out in Robert E. Lerner's Festschrift. Sylvain Piron has provided new manuscript evidence on the transmission of Barthélemy Sicard's Postilla super Danielem, which allowed him to analyse the survival of Peter John Olivi's works and ideas in the fourteenth century [1]. This issue also came up in the 1354 trial (16, 62-63, 100, 124). Elizabeth Casteen has reconsidered the heresy accusations against Louis of Durazzo in 1362 [2], and as already stated above, the confession of Francesco d'Arquata indeed demonstrates his familiarity with Louis, supporting Casteen's argument that there were real grounds to deem Louis of Durazzo a protector of Spiritual Franciscans. Neither Patschovsky nor Piron and Casteen could have taken into account each other's works, but future scholarship must read these publications side by side.

To sum up, this is a carefully made edition of an important text, supported by an erudite introduction and critical footnotes by one of the most experienced scholars in the field. As the scholarly discussion around Spiritual Franciscans and late medieval heresy more generally remains lively, the book will certainly find readers in the years to come.