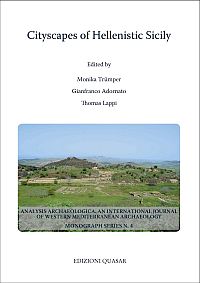 The Hellenistic period in Sicily (roughly 340-30 BC), once overlooked in favour of the Archaic and early Classical periods, is increasingly recognised as a period of prosperity and interest. This edited volume, the proceedings of a conference held in Berlin in 2017, offers 22 studies in German, Italian, French, and English, demonstrating that trend. Like most edited volumes, the individual essays vary in quality, but the book substantially advances our understanding of Hellenistic Sicily and its archaeology.

An introduction by M. Trümper (7-16) outlines the concept of cityscaping, "the process by which urban spaces were actively shaped, modelled, and appropriated" (7), and provides a useful analysis of the state of research on Hellenistic Sicily.

G. Salmeri (17-34) sets out to characterise the overall development of Sicily in the Hellenistic period, arguing that the key factor was not Romanisation but uniformization. Roman recognition of Greek culture as a marker of urbanitas and of the Greek polis as a useful administrative partner led to the spread of the polis and its forms throughout Sicily. Roman taxation drove agricultural intensification and transport networks' systematisation. The next step must be placing these findings in the context of broader studies of the impact of Roman rule on the polis in Greece and Asia, for which similar arguments have been made. Is the process in Sicily part of the same story, a parallel, or a precursor?

J. Bergemann's synthesis of Sicilian field surveys (437-446) provides further information on the agricultural aspect. The key theme is regional variation. In the south (Kamarina, Gela, Phintias/Monte Licata, and Monte Sicani), the Hellenistic Age saw fewer, but larger and more specialised farmsteads than earlier, with villa-like sites identified at Capo Soprano and Misita. The same pattern is seen whether the nearby cities flourished or were abandoned. The north (Halaisa) is different: a massive increase in site numbers, probably due to proximity to Rome, tax benefits, and migration from Italy, but no reported change in site size. How is this variety to be reconciled with Salmeri's arguments for uniformity and general agricultural intensification? Further work will also need to place this in a wider context - the south Sicilian pattern looks similar to that revealed by survey work on Roman Greece.

L. Campagna (55-74) reconstructs the cityscape of Hellenistic Tauromenion, discerning an extensive early 3rd century construction programme with substantial terracing that separated the city into three monumental areas with distinct functions and used the terrain for maximum visibility for those approaching the city by land and sea. Construction in Hellenistic Tauromenion has tended to be understood as part of King Hieron's "building policy," but Campagna stresses local polis agency. Again, considering the broader Hellenistic context should be the next step: cases such as the Sacred Stoa at Priene and the Stoa of Attalos at Athens show how royal and local agency could combine in civic construction in this period.

C. Russenberger (129-56) discusses the cityscape of the indigenous centres of west Sicily, with a focus on Monte Adranone, emphasising differences from Greek models: absence of zoning distinctions, an agora, a cultic centre, and different models for most civic buildings. The guiding principle of the urban layout was not communal citizenship, but clustering of clans/supra-familial groups - as has been suggested for Monte Iato. It is left to the reader to square this analysis with that of S. De Vincenzo (417-35), who finds "Greek influence" on urban layout, fortifications, domestic structures, and civic buildings in basically the same material.

D. Barbera (159-78), the only study focussed on literary cityscapes, argues that Moschion's account of Hieron II's great ship, the Syrakosia (FGrH 575 F 1 = Ath. Deip. 5.206d-209e), is not a description of a real ship, but a rhetorical allegory of Syracuse, taking advantage of the "ship of state" metaphor. This is intriguing, but unsustainable without detailed analysis of Moschion's text - barely quoted. Many parallels between ship and city could be due to Hieron rather than Moschion. If Moschion's ship is an allegory there are some striking - not insuperable - absences (e.g. division into four parts, Zeus Olympios, Arethousa, and analogues for the theatre and great altar) and inclusions (e.g. detailed descriptions of the bilge pumps, a shrine for the sailor-goddess Aphrodite).

A number of contributions look at specific phenomena across the whole of Sicily, generally finding that they conform to Hellenistic models but have some unique Sicilian characteristics, as follows.

R. Henzel (179-95) investigates honorific statuary, finding, despite the fragmentary state of the evidence, that it was as important in Sicily as in the rest of the Hellenistic world.

J. Parkin (307-26) provides a useful framework for identifying prytaneia and uses it to assess various candidates around Sicily, one at Morgantina and perhaps at Ietas, but rejecting candidates at Megara Hyblaia, Akragas, and Solous. In Sicily, it appears prytaneia were part of the stoas added to agoras in the Hellenistic age, not freestanding structures as in Greece, but, with only two examples, further excavations will be needed to confirm this pattern.

G. L. Furcas (327-48) investigates water supply and drainage. The former saw substantial advances with monumental cisterns at many sites. The latter relied almost entirely on surface flow along paved streets. But city plans in the period took careful account of both.

M. Trümper's substantial article (349-94) investigates the development of private and public bathing culture in Sicily. This was closely related to wider Hellenistic developments in bathing culture, but there are a number of unique Sicilian features. There is also significant regional variation: public baths boom in the late 4th and 3rd centuries in eastern Sicily, but only in the 2nd and 1st centuries in the west; domestic bathrooms are ubiquitous in some cities in the period and totally absent in others, seemingly at random.

This volume illustrates the exceptional work currently being done on Hellenistic Sicily, which is very attentive to Hellenistic comparanda. Scholars of ancient Sicily will need to read this book. Beyond asking what these contexts say about Sicily, the excellent Sicilian evidence should be much more prominent in general studies of the Hellenistic world and Roman Imperialism. For that, too, this book will be essential.