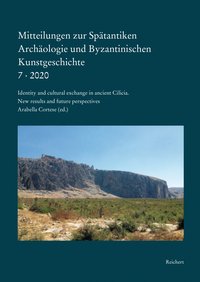 This slim volume of just over 150 pages contains eight papers on the archaeology of Cilicia and ısauria in southern Asia Minor, the product of a conference held in Munich in 2018. ıt is a nicely produced volume, with a very short forward and introduction, plentiful black and white illustrations of good quality at the end of each paper, and no conclusion or index (not these are needed). The chronological focus is mostly on late antiquity, while spatially the emphasis is on the central part of Cilicia between the modern cities of Silifke and Ayaş (ancient Seleucia-ad-Calycadnum and Elaiussa/Sebaste). As a whole the volume reflects the international nature of current fieldwork in Turkey with three Turkish and five central European papers, written in either English or German. ıt is unfortunate that not all the participants contributed papers, with the conference photograph betraying the additional presence of Akçay, Pilhofer, Yağcı, and Varinlioğlu.

The papers include a welcome focus on continued discoveries. Yeğin and Özyıldırım discuss Olba where excavation has produced a fine early imperial Roman mosaic beneath the floor of the later monastery, as well as some nice stone, glass, and metal fragments of church furnishings. Sayar contributes a useful paper on Akören, a pair of late Roman villages about 45 km north-west of Anazarbus, where there are four sixth-century inscriptions in churches datable to specific years, a habit similar to other church sites in eastern Cilicia and Syria.

Several papers note the importance of inscriptions (Sayar, Borgia, Cortese), and there are new summaries of data, either regional (Spanu on Roman urbanization) or local (Erten on late Roman Olba). The papers also point to continuing work, e.g. the forthcoming second volume in the ıK-series on the inscriptions of Anazarbus (Sayar), ongoing excavation at Olba (Yeğin and Özyıldırım, Erten). Papers on the ecclesiastical archaeology of Corycus (Cortese) and Meryemlik (Kristensen), both combine new observations with the fieldwork of the early twentieth century reported in MAMA 2 (Herzfeld and Guyer) and 3 (Keil and Wilhelm). The MAMA volumes are still fundamental for research in this region, though they can now be replaced by new studies for the theatre (Spanu) and necropolis (Linnemann) at Uzuncaburç and for all aspects of Kanlıdivane (Aydınoğlu).

Most of the papers focus very tightly on Cilician and ısaurian themes, so that considerations of wider issues in the archaeology of late antique Anatolia, e.g. the current interest in the second and sixth century plagues, climate change, or the older but still important problems of urban transformation and what happened to the Roman Empire in the seventh century do not receive much attention, with the notable exception of Erten's paper on Olba.

Cilician specialists will probably read the volume anyway, but for non-specialists perhaps the most useful contributions are Borgia's paper on Roman identities and Kristensen's paper on Christian pilgrimage at Meryemlik. Borgia provides a careful and cautious introduction to questions of identity, in particular the problem of drawing conclusions based only on the onomastics of inscriptions. Her divisions of the region's population during the Roman era into three categories (indigenous, Greek, and foreign (which includes Romans)) is a common one, though by the fourth century AD one wonders whether these categories had been subsumed into a simple Cilician identity. The presence at coastal sites of a number of Syrians from named villages like Kapernagathos is highlighted, suggestive of the importance of coastal trade, but also a reminder that central and eastern Cilicia had been administered as part of the Roman province of Syria before AD 72. She also sees the coastal region as being quite different in terms of onomastics from the interior around Claudiopolis and Germanicopolis. Kristensen's paper examines pilgrimage at the late antique Christian sanctuary of Thekla at Meryemlik. ıt is based on the early twentieth century fieldwork of Herzfeld and Guyer, but includes some nice maps and photographs and consideration of other pilgrimage sites in pre-Christian Epidaurus and late Roman Qalat Seman in Syria. Kristensen applies a methodological perspective focused on the sociology of gatherings, thinking about movement to the site from nearby Seleucia (modern Silifke), and a useful reminder that though many visitors now approach from the south, the dominant ancient approach was from the north.

Overall, this is a useful collection for those whose research focuses on classical Cilicia, published swiftly and well-edited. However, only reviewers seem likely to read a physical copy from cover to cover, while others will access individual articles online.