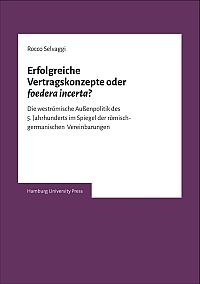 How did Rome use diplomacy? Was the Late Roman Empire successful when dealing with its external enemies? Rocco Selvaggi's book examines these two 'big questions' by discussing the legal treaties between the Western Roman Empire and the Burgundians, Vandals, Suebi and Visigoths in the fifth century CE. The author's main argument is that the measures adopted by the Western Roman authorities to regulate their relationships with the 'Germanic tribes' varied according to the specific needs of each historical circumstance. In particular, pressure on resources led the empire during the fifth century to a greater focus on strategic diplomatic relations in order to avoid war. While the legal arrangements embraced by the imperial government became more flexible in order to achieve this end, the ideology of the Roman ruling elite remained the same, whether or not they turned from violent means to diplomatic remedies. Regardless of the context or the actual content of the agreements reached with the barbarians, the Roman leadership viewed any treaty as a representation of Roman superiority. Its goal was always to assert imperial supremacy.

To demonstrate these points, the book is organized in seven coherent thematic chapters. The introductory chapter one briefly summarizes the status of past and recent research, thus setting the stage for the core of the study. Chapter two tells us the story of the political relations between the Burgundians and the imperial authority and its local representatives, the Gallo-Roman elite, from the early fifth century to the 460s, when evidence of treaties ceases. Chapter three describes the long journey of the Vandals from Gaul in the early 400s, to North Africa, from 429 until the treaty between Geiseric and Orestes in the 470s. The crucial turning point in the history of this successful migrant group has been correctly identified in the juncture when, under the brilliant leadership of Geiseric (429-77), the Vandals first forced the Empire to concede a treaty in 435 that was advantageous to them, allowing them to negotiate from a position of strength their settlement in the two wealthiest provinces of Africa: Proconsularis and Byzacena (in the early 440s). Chapter four is one of the most original parts of the book. Expanding on scanty and often contradictory sources, the author traces the story of the Suebi in a scenario in which their destiny intersected with the politics of the Empire, the vicissitudes of other groups of newcomers (Alans, Vandals, and Goths), and a local population united around two divided churches (Nicene vs. Priscillian). Taken together, these actors greatly affected the chronology and the condition of the Suebian settlement in Galicia. Chapter five scrutinises in great detail the changing fortunes of Alaric's Goths from their entry onto the imperial soil to the formation of an autonomous polity at the end of the fifth century. The chapter makes clear that no linear history is possible, even though it identifies in the transition from foederati to amici a crucial point in the formation of a new political identity. Chapter six is another original part of this study. It compares and contrasts the four aforementioned case studies by examining three factors. The first factor concerns the identity of the Roman diplomats involved, whom the author variously identifies as high imperial clerks, senior military officers, or bishops. The second element is the length of the agreement reached, which was understood differently by the two parties, thus generating conflict about its enduring value when political situations changed. The third factor is the ability of the imperial authority to develop new legal arrangements in reaction to the changing political and military situations. The final chapter seven is a fitting summary of the arguments exposed in the previous chapters.

A series of observations follows. These are not actual criticisms, but simply suggestions of possible ways to expand or refine some of the arguments set out in the present research. No study is the definitive one. The first remark concerns the author's use of collective names such as Burgundians, Visigoths, Vandals, and so on. Scholarship has demonstrated that these ethnonyms describe heterogeneous groups deprived of a monolithic ethnic identity, as well as of any ancestral legal culture. [1] There were no two static parties (Romans vs. Barbarians) involved in the legal arrangements mentioned in the contemporary sources, but instead two eminent individuals, each of them representative of mixed groups with different vested interests. This explains why agreements had to be fluid, as the author correctly argues at many points in his study. The second observation concerns the author's choice to leave aside the debate initiated by Walter Goffart in the 1980s, which revolved around the question of whether the 'accommodation' of the barbarian migrants was accomplished through the redistribution to them of land or of taxes. Which one of these two alternatives applied in each historical case nevertheless contributes to a better understanding of the quality of the political relationships between the parties involved. The third comment deals with why the Vandal's takeover of Africa differed significantly from the other three cases of settlement. While in the latter examples we can easily identify a common path, which took the form of various arrangements aimed at settling troops in borderland or isolated areas of the Empire, in Africa a different class of sources strongly suggests that the imperial elite had never planned to deploy a strong army there. Neither did the Romans intend to give up their economic powerbase to allied forces, whether these were Moors or Vandals. [2] This important distinction leads us back to the question raised at the beginning of this review: was the Empire with its elites successful in dealing with 'their barbarian enemies'? The short answer is that the Roman leadership, who had no space in their ideology for the concept of defeat (as the treaties carefully examined by Selvaggi clearly show), mishandled most of the political crises of the fifth century. While they expended a lot of political energy and military resources in Gaul, they failed to understand the dimensions of the Vandal challenge until was too late, and this determined not only the loss of the wealthiest province of the Western Empire, but above all the consequential exhaustion of their financial resources. [3]

"Erfolgreiche Vertragskonzepte" is a valuable study, which collects and critically examines the sparse and difficult evidence regarding treaties. The book is thus a useful point of reference for anyone interested in the political history of the Later Roman Empire. At the same time, this research also suggests that the issue of 'politics' is on its own insufficient to explain the structural transformation of the fifth century.