The Villages of the Fayyum 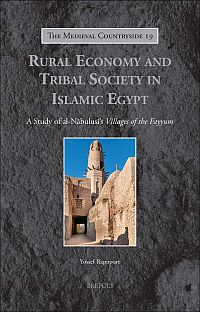 The focus on urban elites (the military, the ulama, merchants), urban cultural production, and urban art and architecture that has long defined Mamluk Studies has been slowly giving way in recent years to research on the management of natural resources, agriculture, the social structure of small-scale communities, and peasant resilience. This shift of interest towards rural topics has had less to do with the discovery of new source material, and more with a new interest among Mamluk scholars in village life and the world of peasants. It has meant turning away from the traditional reliance on administrative manuals and geographies (which are themselves urban products) in writing any kind of rural history, to under-explored sources, such as waqfiyyāt, legal manuals, treatises, and material culture. Rapoport's beautifully written study of the Fayyum, and its companion volume, take a fresh look at a treatise that has been long known but, until now, not comprehensively and systematically studied. It provides the first complete edition, annotated translation, and comprehensive study of al-Nābulusī's Ta'rīkh al-Fayyūm wa-bilādihi, the most detailed microstudy of a rural economy in the pre-modern Islamic world.

Rapoport's work is the first work since Sato's ground-breaking monograph of 1997 to document what can be known about Mamluk Egypt's agricultural societies, and it provides a complement for the Mamluk period for work by Mikhail on Ottoman Egypt's flood-basin culture. [1] The author makes use of many of the same sources, rereading them with an eye to the social dimension and the lives of peasants, rather than only the administration of the lands they worked. He does so through a combination of historical geographical methods (namely a spatial analysis of places, land use, and tribal structure) [2], a historical anthropological approach, and pulling on archaeological literature, as relevant to the Fayyum. As a result, the work engages directly some of the most animated debates in our field today, such as the timing and process of the Islamization of Egypt and the ultimate meaning and function of Arab tribalism. 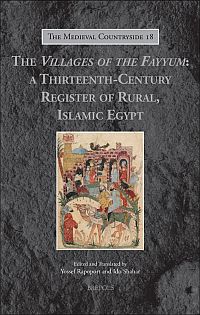 The author of the treatise, ʿAlā al-Dīn Ibn al-Nābulisī (d. 660H/1262 CE), was the chief financial advisor under the Ayyubid Sultan al-Kāmil. His son, Sultan al-Malik al-Ṣāliḥ, sent al-Nābulsī to the Fayyum in 642/1245 to conduct a fiscal survey of the region. This visit resulted in the treatise studied by Rapoport, which is something akin to a historical topography. It combines the kind of information one would find in a traditional geographical account (including descriptions of land and people and a historical survey), with the data from his fiscal survey and his personal observations of agricultural conditions, and the extent of settlement and abandonment. The treatise is the closest we will come to a tax register for pre-Ottoman Egypt, as it in rich in details about tax liability, crops, and places.

This two-volume set consists of Rapoport's social analysis of al-Nābulusī's economic text, as well as a co-authored edition and translation into English of the treatise itself. Rapaport organizes the first volume into nine chapters, the first three of which introduce the reader to the treatise and its author; provides a deep-time survey of the Fayyum's history from the Ptolemaic period; and describes the geography, natural resources, and demographics of the region, estimating the amount of land available for cultivation and the size of the local population. These pull heavily from the work of historians and archaeologists specializing in the pre-Islamic eras and provide a context for the late Fatimid decline and eventual Ayyubid revival of Fayyumi lands. His very careful and detailed analysis of the treatise itself, then, follows, with chapters on subsistence and taxes, cash crops and commerce, land tenure, social structure, confessional structure, religious and social transformation, and conclusions.

Cultivation for subsistence and taxation is the topic of Chapter 4, which is divided into subsections on different agricultural products and livestock. Rapoport goes beyond a description of these tax categories to an analysis of their contributions to the larger Ayyubid tax base in the region, the spatial distribution of these activities, and reconstructing the organization of each industry. In mapping the distribution of certain agricultural activities and employing statistical analysis, and through a complex calculation of taxation rate for each crop and estimates of yields, he differentiates between market-based and specialized production, and activities that were subsistence-based. The most important crop, by far, was wheat.

Sugar, orchards, and markets - the cash-based component of the economy - are the focus of the following chapter. The rapid expansion of the sugar industry was, for the author, one of the most important developments of the time, impacting other cash crops. By the mid-thirteenth century, sugar cultivation had essentially replaced rice and cotton in the Fayyum. Particularly interesting in this regard is Rapoport's discussion of the organization of production on what al-Nābulisī explicitly calls "estates" (awāsī); the differences in the composition of the labor forces in the Fayyum from that of the Jordan Valley is particularly striking. Orchards and vineyards remained in the hands of Christian peasants, some in private tenure, with particular villages specializing in certain products. Interestingly, olives and olive oil were not important commodities in the Fayyum.

Rapoport devotes Chapter 6 to a detailed, micro-study of iqṭaʿāt. One of the greatest benefits of al-Nabulisi's treatise is that it provides detailed information about the organization of the iqṭāʿ system and distribution of iqṭaʿāt in one region, in one moment of time. Discrepancies with the administrative manuals usually consulted by Mamluk scholars on this topic reveal tensions between the ideals of administration and the realities of daily practice. Rapoport paints a picture of relatively powerless muqṭāʿs, who are reliant on local officials, the local governor, and local tribal forces to collect taxes and ensure law and order. Assessing the value of these tax grants requires reviving debates on the dinār jayshī. Information on the frequency and nature of muqṭāʿs visits to their lands, and their relations with officials and peasant during that time, is especially informative.

Chapters 7-9 and the Conclusions collectively explore one strain of Rapoport's current research that is of critical importance to the question of Islamization. Based on GIS mapping to identify correlation between place, crop and tax, and tribal and religious affiliation, Rapoport suggests that the Islamization of the Fayyum was complete by the time of a-Nābulisī's survey. By then, nearly all arable land was cultivated by Muslim peasants (with tribal names), and Christians largely tended orchards and garden and were involved in industry and business in "the city" (Madinat Fayyum). He argues that this was the result of two changes in imperial finance: the standardization of the poll tax and removal of exceptions, which made it impossible for many Christians to survive; and the transformation to most arable land as iqṭaʿāt, and collective taxation on those lands. The collective nature of taxation on cereal-producing lands and labor on irrigation canals was best supported by the segmented structure of tribal society. In short, voluntary conversion of local Coptic peasants, who adopted an imagined tribal identity, was a survival strategy. Islamization through tribalization, rather than migration, is a theme that resonates in much of his work today. The volume ends on a rather modern (and potentially controversial) note: the relevance of Coptic conversion to the making of modern Egyptian identity.

The companion volume by Rapoport and Shahar is the formal edition and translation of the treatise, based on the two extant copies of the text: a 19th-century copy in Cairo of a 15th-century manuscript, and a 16th-century manuscript in Istanbul. The volume begins with two brief chapters about the author and text (summarizing points made in the first volume); a chapter clearly explaining the terminology of place and tax used by al-Nābulusī in his text; an extremely useful glossary of measures, weights, and monetary units (carefully calculated by Rapoport on a collective reading of secondary studies); and a map of the Fayyum (the result of his painstaking efforts to identify village and hamlet names listed in the treatise). The edition then follows, organized by the editors into sections for easier reading and reference, and with the English translation on the same page. They have also included three separate indexes, which make for a very convenient reference: fiscal and agricultural terms, placenames, and a general index. The English translation presents a fluent, rather than merely literal, reading of the Arabic text. The editor's have also produced an Excel database of the quantifiable data from the treatise, which is available online in an open access form.

Of course, one cannot fully reconstruct the economy of the thirteenth-century Fayyum from a study of this text alone. Many economic activities would have been invisible to al-Nābulusī, as they were not taxed, and many agricultural bi-products were commodified only at the local level, such as dung and chaff. Likewise, the cultivation of different strains of the same crop (such as wheats and barleys) for different consumers - an indigenous practice readily recognized by archaeologists and botanists - leaves no textual trace in this treatise or later tax registers, which treat qamḥ and shaʿīr as single tax categories. [3] While al-Nābulusī's text would lead us to believe that there were no local markets outside the capital, and that the rural economy was monetarized only to a limited degree, with peasants' access to cash quite limited, there is, nonetheless, growing archaeological evidence for both village markets and cash exchange, alongside barter, throughout the pre-modern Levant. [4] There is no reason to believe the Fayyum was any different from other regions of the Ayyubid and Mamluk territories in this way. Rapoport does leave open the possibility, then, of some level of monetarization of the village economy and the existence of local markets.

Because al-Nābulusī's text is a treatise and not a tax register, it provides a wealth of information in narrative form about agricultural practice on the local level. Rapoport fully seizes the opportunity to glean details about how the administration of tax collection really functioned, how labor was organized, the nature of peasant society (their resilience, autonomy, self-identity), and the nature of peasant communal life, raising such questions as whether such a thing as a "village community" really existed, and how riparian communities were formed and functioned. With his keen eye for the details of daily life, and spatial analysis, Rapoport has pulled information from the treatise that would have been easily overlooked by other scholars, but is of enormous value to anthropologists and archaeologists, such as the existence of egg hatcheries and networks of egg exchange, pasturing in the lands of another village, a typology of settlement forms, and the resettlement of abandoned places.

Rapoport has done an enormous service by making available to us a full edition and translation of this invaluable treatise. It is a model example of how the contours of daily life in villages can, indeed, be reconstructed through what at first glance look like dry financial reports. This is a very important contribution, not only to the historiography of Middle Islamic societies, but to peasant studies in the Islamic world.

[2] For the GIS-mapping of places, land use, and taxes in this manner for Ottoman Syria, see Wolf-Dieter Hütteroth / Kamal Abdulfattah: Historical Geography of Palestine, Transjordan and Southern Syria in the Late 16th Century, Erlangen 1977.