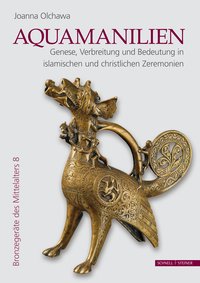 Multiple recent exhibitions have enriched our understanding of aquamanilia: magnificent objects for the dining table, with their hygienic function, and their use for religious rituals of church and synagogue. One is immediately struck by the continuum of forms from Etruria, to Iran in the 8th - 10th century, and then to their Western corollaries. The earliest dated aquamanile, inscribed by the maker Suleiman in 796-797 A.D. (Cat. 4) reminds us of the desire for cleanliness in the Islamic world. This is celebrated in the The Book of Knowledge of Ingenious Devices, written by the polymath Ibn al-Razzāz al-Jazarī, in 1206.

With the integration of technical analysis and a better understanding, the cire perdue technique has also become a critical tool to establish - and confirm - geographic groups and centers of production, especially for towns / cities such as Hildesheim, Nuremberg, and Magdeburg. The analytical results documented in the New York and Hildesheim catalogues greatly aided in determining these specific centers.

Olchawa's Aquamanilien was conceived as part of the series of Bronzegeräte des Mittelalters, constituting Volume 8 in the series. It is a pioneering work that aims to bridge the Islamic world and the Latin West, including Judaica, during the middle ages. The author has hit on a rich vein of intersecting cultural and technical issues. Additionally, one finds some newly discovered aquamanila, such as the striking dragon, now in Hildesheim. Following the historiography of interest in these engaging creatures she brings forth new connections. Indeed, astonishing parallels exist between ancient and medieval aquamanila, as witnessed in the ceramic Etruscan rooster vessel and its medieval reincarnation (Cat. 134).

The organization of the volume first introduces overviews in multiple sections: Material and Techniques; aquamanila of the Islamic courts; the central European workshops; the Christian moral interpretation of handwashing from an iconographic viewpoint; followed by the context of the Christian ceremony. The catalogue itself is not intended to be a catalogue raisonné of all known examples of the entire middles ages, but covers 167 works. It begins with the earliest Islamic works from the 6/7th century until the early 13th century (21 works). This is followed by the 12th and 13th century groupings, arranged by regional production and established city workshops that includes Mosan, North German, Magdeburg and its wider circle. The larger group of lion examples of Westphalia and those of North Germany, in the years before and after 1200, is followed by the significant center of Hildesheim. It concludes with aquamanila of Hungary. Thus, generally, the selection of examples goes up to the mid 13th century. Obviously, many of the forms continue to be imaginative and inventive until the end of the middle ages. Where appropriate the author includes revealing comparanda to situate works in a larger context. The high quality images throughout make even a casual reader ponder theses delightful objects that almost become a kind of walk-in Bestiary.

The role of the Islamic world is demonstrated eloquently for the sources of many principal forms witnessed in Western medieval examples. Ironically, the rise in popularity of aquamanila in the West coincides with their decline in the Islamic world, a phenomenon that is meritorious, yet not well understood. It is suggested by Olchawa that Islamic or Iranian ceramic forms became the norm, as seen in an example in a lion aquamanile in the Brooklyn Museum (465). Almost simultaneously, the exploitation of this form appears in the Hamburg copper alloy lion produced in North Germany (Cat. 123).

Some works are not functioning aquamanila, such as the monk and the dragon MET (1982.60.396), but it seems to be related in concept to others, such as a dragon devouring a monk at The Cloisters (47.101.51) (Cat. 27, as Mosan or North German, mid 12th century). Its more elaborate form (Cat. 127) adorns the cover of this monumental study. From the simple to the more complex, these relationships raise the question of the genesis of these forms in northern Europe and their chronology. Olchawa regards the Meuse valley as the likely region where the form first appears ca. 1100 with mentions of them at Sint-Trond, Belgium (Cat. 28). Here, this type of dove form also has striking parallels to, and perhaps lays the foundation for, the later Limousine Eucharistic doves; but they, in turn, also reflect types / forms of the early church. The category of bust forms also are a fascinating class and a specialty of Lower Saxony.

Thus, this key volume by Olchawa is especially timely and welcome. One might see her project also as a study of hygiene in the middle ages, an orientation not explored, but highly suggestive, as part of their functional value. Today, a world hyper sensitive to the practicality of these forms - however symbolic or functional - would see them in this new light by being both purposeful and prized emblems of good health, and simultaneously being elegant works of art.