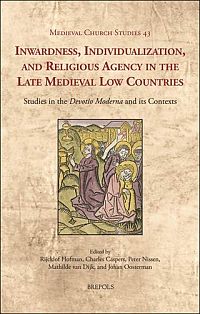 Context is paramount in any definition of individualisation in late medieval devotion and practice of religion. It is therefore entirely appropriate that both the introductory chapter of the volume under discussion and the subsequent essay by Rob Faesen focus instead on the necessity of demarcating the binary understanding of 'the individual' as an independent unit among other units in a group from that of 'individual' in the modern sense of 'assuming a separate identity' alongside others in a group or society. That the etymology of the Latin term persona and its cognates can only truly be explained through a historical-anthropological evaluation of 'the self' is but one indication that one ought to be well-informed of historical context when writing about individuality. Besides, as Koen Goudriaan reminds the reader in his essay on commemorative duties in communities associated with the Devotio Modena, the notion that one's habitus simultaneously conditions and enables an individual's agency is indubitably applicable to religious communal contexts. This calls for greater caution still where the temptation is to treat individualisation as a linear development.

Rijcklof Hofman, in his introductory essay, suggests that the principal etymological understanding of the 'self' in terms of one's role or functionality in a wider sociological sense predominated in the earlier Middle Ages. Only much later did the 'self' become progressively more synchronous with the individual as independent agent. An important breakthrough of interest in the self is argued to have manifested itself during the course of the twelfth century, caused in part by a rise in education, and a consequent push for philosophical speculation, yet more predominantly by the remodelling of monastic life. Cloistered modes of living were challenged by a wider range of options, including the mendicant orders and non-institutional religious communities. The argument put forward here is that not only choice itself made religious practice a more personal experience, but that the multiplicity of options in choosing a religious lifestyle also translated irrevocably to a higher degree of pliability in dealing with idiosyncrasies within religious communities, where rules and constitutions were nonetheless expected to be met with due dedication. (13)

Evidence for coexisting aids for religious expression follows in Nigel Palmer's discussion of variety in meditational prayer cycles which commemorated the life and humanity of Christ before the Devotio Moderna.

Apart from the wider variety in means of religious expression by way of liturgical and material aids in devotional practice, the increasingly popular choice of voluntary observance over monasticism is a recurring topic that can be identified in the contributions by Rijcklof Hofman and Margarita Logutova in their accounts of Geert Grote and Thomas a Kempis respectively. Throughout the volume, both of these developments are seen as persuasive markers of a gradually progressing sense of inwardness and individualisation in the later medieval Low Countries, often installed to benefit the individual's spiritual growth, even in communal settings. The reader is thus encouraged to consider the role and perception of the individual in the changing religious settings, as well as in the shift in focus towards inwardness and immersion of the self into devotional practice.

The argument is deepened, rather than challenged, by the observation that voluntary observance posed unprecedented challenges to the regulation of poverty, chastity and obedience by individual adherents and therefore, paradoxically, re-emphasised the advantages of monasticism. Indeed, the particularly well-defined case of the Vivendi formula (ca.1435) by Salome Sticken, the first prioress of the earliest established women's convent to emerge from the movement inspired by Geert Grote's teaching, convinces the reader that the need for practical guidance in the interaction between the sisters at Diepenveen created the demand for a newly formulated foundation for spiritual edification. Anne Bollmann efficiently illustrates how the text addresses religious agency as the responsibility of the individual, yet simultaneously stresses the need for obedience and describes in some detail how various modes of interaction are subjected to the guidance and scrutiny of the rectrix. Alijt Bake, who joined the Windesheim convent of regular canonesses 'Galilee' in Ghent in 1438, repeatedly ran into conflict with the leadership of the congregation, despite being elected as prioress in 1445. Her interesting case further illustrates that the boundaries between calling, personality, individual expression and communal practice were occasionally pushed, but by no means fluid in the sister houses of the Devotio Moderna.

How individual expression relates to a material text is not always easily established, not in the least due to the complicating role of media. Any straightforward attribution of an increased awareness of the 'self' to the invention of the printing press and texts being available more widely and affordably, for example, ignores any longer standing correlations between material value and ownership, as well as the dynamics of supply and demand at play between commissioner and author-compiler.

There are no such generalisations in the contributions that address the role of material culture in religious practice. Instead, attention is paid to the focus on fixation and inwardness in the instances where individualisation and personalisation can be viewed as an effort to draw the reader or beholder closer to text or image. The case for increasing interaction between image and beholder has been made by previous scholarship, and is persuasively and abundantly complemented by the evidence presented by Anna Dlabačová on the devotional psalms and prayers compiled specifically for lay readership by an anonymous author-compiler in the late fifteenth century. [1] Thom Mertens and Diewke van der Poel show how, similarly, inwardness was facilitated by the application of the 'I'-perspective in devout songs and prayers.

Altogether, the book presents a balanced and thought-through selection of essays which stimulates the reader to first of all consider an appropriate approach to individuality in religious communal life in the late medieval Low Countries. At the same time, the reader is presented with exactly the kinds of evidence one needs in order to make a valid judgement of how these instances may be seen as markers of individualisation. Herein lies the success of the volume, which is best described as highly inspiring and relevant to anyone intent on studying the Devotio Moderna in its wider contexts.

[1] See Peter Schmidt: The early print and the origins of the picture postcard, in: The Woodcut in Fifteenth-Century Europe, ed. by P. Parshall, Washington 2009, 239-257.