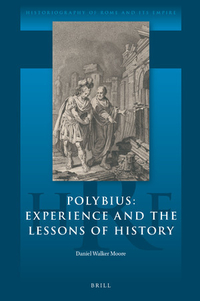 Daniel Walker Moore's new book on Polybius' ideas on experience and historical lessons consists in six chapters. Chapter 1 ("History and Experience in Polybius," 7-34), takes up Polybius' interventions in the meaning of empeiria, and the much discussed pragmatikē historia and methodikē empeiria. The next two chapters (Chapter 2: "Hannibal, Practical Experience, and the Model Historian," 35-69; and Chapter 3: "Learning from History," 70-91) focus on exemplary, larger-than-life historical figures in connection with the theme of history as magister vitae: Hannibal, Philip V, and Scipio Africanus. Hannibal and Africanus emerge as models for emulation, while Philip fails to absorb and impart lessons of history and experience.

With Chapter 4 ("Experience and History in the Roman Constitution," 92-110), Moore moves from the individual to the collective, focusing on the account of the Roman politeia and the aristocratic funeral in Book 6. In a compelling analysis, Moore argues that Polybius sought to close the gap between first-hand, personal experience - which usually has the advantage of vividness, or enargeia - and second-hand, historical written accounts. For him the Roman aristocratic funeral served as something like an historical text preserving collective memory that sacrificed none of the immediacy and sharpness of personal experience.

As Moore shows, for Polybius, the Roman constitution evolved through hard experience and trial and error, rather than through theoretical knowledge, and the aristocratic funeral preserved collective memory and history's lessons through reenactment. Historical lessons of the aristocratic funeral seem to operate on different registers: the funeral itself is a kind of theatrical historical text, but the reader of Polybius' account of it could be inspired as well, even if at a further remove from the great men it impersonated. The important point of the funeral in Moore's analysis is that the Romans, for Polybius, learned by doing more than by knowing.

Moore next discusses Polybius' narrative account of Rome's innovative advantages in its competitive international environment (Chapter 5: "Roman Innovation in Polybius' Narrative," 111-28). He examines Polybius' treatment of the First Punic War, with the famous Roman equalizer of the corvus or "raven," first seen in the naval engagement off Sicilian Mylae in 260; lessons learned in the Hannibalic War; and the value of exceptional individuals: Scipio Africanus and Archimedes.

The final chapter (Chapter 6: "Exemplary Roman History," 129-40), riffs on Chapters 2 and 3 (as well as the section in Chapter 5 discussing Africanus and Archimedes), insofar as it channels experience and lessons of history through the prism of individuals rather than collectivities. The focus here is upon Aemilius Paullus and Scipio Aemilianus, both of whom greatly impacted the historian's own life and career. In both cases, these individuals replicated the exemplum set by Africanus, as Rome relied (at least in Polybius' mental universe) more and more on individual commanders. Moore contrasts Roman collective reaction to Hannibal's early victories in Italy, recounted in Book 3, and the paradigmatic example of Aemilianus in the Celtiberian War (Polyb. 35.4). What was new for the younger generation of Romans was willingness to learn immediately by imitating positive role models (like Aemilianus), rather than piecemeal from arduous lessons of hard experience. In the debased times of the post-Hannibalic war period, Roman virtue was harder to come by (cf. Polyb. 18.35.1-2), and exemplary individuals became ever more valuable among the world conquerors; men like Aemilianus, who instilled the same patriotic zeal for emulation as the aristocratic funeral.

This book is a lucid exposition of empeiria and learning, and the role of historical writing in these processes, in Polybius' thought. But there is a fair amount of slipperiness and seeming inconsistency in the historian's working out of these ideas. There are various ways we can account for this. First, we might simply say that Polybius was not a very clear thinker, whose intellectual acuity compares unfavorably with an historian of Thucydides' stature (a notion that Walbank himself from time to time fostered). But such a stance is unsatisfying and doesn't take us very far. Perhaps it would be better to assume more generously that Polybius was finding his way in breaking new historiographical ground, employing informational advances of his times (cf. Polyb. 3.59.1-8) in an historical work of monumental scope. In this case, we should hardly expect a smoothly polished, highly and consistently articulated intellectual tour de force. Along these lines, we might invoke and disavow one of Quentin Skinner's methodological fallacies, the "mythology of coherence," in which we erroneously insist on intellectual uniformity from authors who are subject to changing life circumstances and resultant shifts in their ideological positionings (certainly applicable to Polybius). Finally, we might attribute some of the rough edges in Polybius' historiographical formulations to the fact that he lived in a highly rhetorical culture, and in any particular passage he may be employing key terms in service of the argumentative objectives of the moment.

Moore leaves it for others to plumb the depths of issues such as these. His remit is to identify and elucidate Polybius' ideas on experience and history for commanders and statesmen, and more generally for the business of life, and to point to murky areas in Polybius' pronouncements on these themes where there is plenty of room for further scholarly work. He has achieved this admirably.

In his essay, "What Is Art?" (1897), Leo Tolstoy observed, "To evoke in oneself a feeling one has once experienced, and having evoked it in oneself, then, by means of movements, lines, colors, sounds, or forms expressed in words, so to transmit that feeling that others may experience the same feeling - this is the activity of art. Art is a human activity consisting in this, that one man consciously, by means of certain external signs, hands on to others feelings he has lived through, and that other people are infected by these feelings and also experience them." Moore's book, in essence, shows that Polybius was striving to lift historical writing to the power of Tolstoy's art (perhaps a counterintuitive discovery, given Polybius' frequent intrusive editorializing, in which he proclaims himself to be a no-nonsense, unembellished, plain-speaking anti-stylist).

Polybian studies are thriving. Moore's book, crisply written, concise, and jargon-free, will well serve the serious undergraduate student wading for the first time into Polybius' dense history. In this regard, it well complements David D. Philipps' 2016 commentary on Book One, which fills a gap by assisting students philologically with Polybius' tedious and difficult Greek prose. But Moore's book at the same time raises new questions and stimulates the veteran Polybian scholar to push on in uncharted directions. And that is no mean feat.