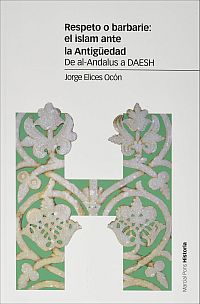 The reviewed book approaches a relevant topic, the reception of the past. In the specific case of Islamic societies, a well-known religious concept traditionally influenced the way the pre-Islamic past has been considered. The notion of jāhiliyya names in Arabic the period of 'ignorance' predating the preaching of Islam early in the 7th century by the Prophet Muhammad. This concept opposes the 'knowledge' (ʾilm) of God and his message, which represents the hallmark of Islam. However much the idea of jāhiliyya may have affected the reception of the pre-Islamic past over time, the book by Jorge Elices lays bare the need for a much closer look in order to gain a right understanding of the varying approaches took in specific Islamic societies on this topic.

Together with the Introduction and the final remarks, Respeto o barbarie includes five chapters that cover two not utterly unconnected but, to a large extent, different topics. The book opens with an issue widely echoed in the media over the last years: 'DAESH's destructions in Syria and Iraq'. Tearing down of the Bamiyan Buddhas in 2001 by the Taliban in Afghanistan first featured for the international community the deep scorn of radical Islam towards pre-Islamic history and cultures, especially when it comes to its religious representations. More recently, the five years of the DAESH rule (2014-2019) left a much more awful trail of destruction in many different Middle Eastern archaeological landmarks, causing irretrievable harms to the historical heritage in a territory featured as one of mankind's civilization cradles.

The rest of the book, made up of the remaining four chapters, centers in al-Andalus with a rather exclusive focus on the Umayyad caliphate over the 10th century. The author deals with the attitudes towards the pre-Islamic past from a two-pronged approach, material and ideological. The second chapter ('Al-Andalus in the 10th century: a unique scenario') takes up two basic issues, the vision of the past in Aḥmad al-Rāzī's lost book on the history of al-Andalus and the Arabic version of the 'Seven Books of History Against the Pagans', by Paulus Orosius (4th-5th century), the single translation known so far of a history book from the Antiquity in medieval Islam. Under the title of 'Did they really forget the past in al-Andalus?', the third chapter overviews the knowledge of Ancient history (especially Roman), in al-Andalus, focusing on three main topics: history, science, and cities and monuments. The fourth one ('Destroyers and antiquarians in al-Andalus') approaches the two opposing attitudes towards the material remains of the pre-Islamic past. On the one hand, the reusing of all sorts of elements (buildings, spolia, statues) with different aims, whether with the pragmatic goal of taking advantage of these materials for new constructions or within a more complex approach framed in certain ideological projects. On the other hand, the rejection and eventual destruction of these same material remains because of religious prejudices. The fifth and final chapter specifically addresses one of the most interesting and, in my opinion, relevant topics, the role played by the pre-Islamic past in legitimizing the power of the Umayyads, the dynasty that has ruled over the longest period of time (and continuously) in Iberian history to the present day.

At first sight, the structure of the book might well look rather unbalanced. In a monographic study centered on al-Andalus, the presence of an opening chapter on the destruction of pre-Islamic ruins and monuments by DAESH could be perhaps considered unjustified. However, the rationale behind it seems easy to ascertain. In stark contrast to the image of barbarism and destruction provoked by jihadist terrorism, widely disseminated at present among broad social sectors, the rest of the book allows the reader to understand that, beyond an unmitigated denial and rejection, there had been opposing approaches over time to the pre-Islamic past that can be rightfully featured as Islamic.

In this regard, the book can be extremely appealing for the most general audience, providing the reader with a more nuanced notion of Islam which may serve as a counterbalance to the abiding influence of prejudices and stereotypes provoked by the idea of an unbroken continuity between the past and the present, especially when it comes to Islamic societies. Given the increasing number of pervasive cliches currently plaguing social media and even mainstream mass media, this looks like one of the overriding goals to be achieved by scholars currently working on Islamic Studies and/or Islamic history.

For the specialist, likewise, the book offers a good number of attractive ingredients. It holds true that a relatively abundant number of previous scholarly works drawing on both the Arabic literary sources and the material remains (especially regarding the mosque of Córdoba and the Caliphal City of Madīnat al-Zahrā'), have approached the reception of the pre-Islamic past in al-Andalus. The author is right, however, when claiming the inexistence of a monographic study dealing with the topic from a global perspective. Respeto o barbarie, therefore, covers a knowledge gap and is meant to be the reference work in the subject for years to come. To the best of my knowledge, it represents the earliest attempt to present an overview of the extremely complex reception of the pre-Islamic past, not only in al-Andalus, but in the general framework of Islamic history.

Just like in any other scholarly work, the book includes parts and elements that could have been improved. In this regard, for instance, the author pays clearly insufficient attention to the notion of jāhiliyya, which plays a crucial role in the definition of the book's main topic, as previously mentioned. Overall, however, it is a well-grounded book that makes careful use of the sources and presents a rounded coverage of the different topics dealt with.

In short, an excellent book dealing with an important and ill-treated topic so far, which will certainly raise the interest of the more general audience, the formed reader and the scholarly outlets alike.