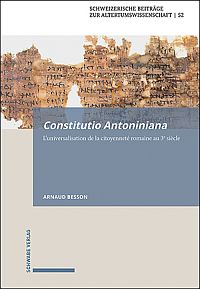 In the last decade, the Constitutio Antoniniana (CA) has enjoyed a high profile within the scholarship of Classics and legal history, spurred partially by the edict's 1800th anniversary falling in 2012. While the wider Severan period remains less studied, the emperor Caracalla's great act of mass enfranchisement has seen several publications examining its rationale, legal significance and historical legacy. This said, it may also arguably be seen to have polarised writers between juristic works and those of ancient history, with each tending towards their personal comfort zone.

It is into this crowded market that Arnaud Besson's book on the CA enters and offers a significant contribution. Besson cautions us not to view the CA as the end point in a process of Roman citizenship, but rather as a hinge point: a significant development, but not a final one. [1] To demonstrate this, Besson sets out to offer a 'socio-juristic' assessment of the CA against a grand vista of Roman history. He is correct that the edict cannot be understood holistically without situating it within a longer historical study, and the result is an impressive volume traversing from the early imperial period into late antiquity.

The book comprises eight chapters, divided into four sections. The first section, Sources, offers a synopsis of past scholarship on the CA before moving into the surviving evidence for the edict both contemporary (such as the testimony of Cassius Dio, the fragmentary writing of Ulpian and the much vexed P. Giss. 40.I) and subsequent. Particularly helpful here is a pair of tables (24) which collate references to the extension of citizenship and to the CA as a divine gift (theia dorea).

The question of dating the CA is painstakingly addressed but conforms largely to the currently prevailing consensus that it was introduced in early 212 CE. More strikingly, Besson interlinks a discussion here concerning the spread in usage of the name Aurelius prompted by the edict, showing that it reached areas of Asia Minor by early 213, with some papyri suggesting an even more rapid uptake.

The second section, Grants, considers the routes to citizenship prior to 212, offering a detailed insight into both individual and communal grants of civitas and lesser rights. This section covers key pieces of evidence that will be familiar to those who have studied the period, such as the Tabula Banasitana. While not as innovative as some of Besson's other sections, this collation of varied sources is a necessary preamble to the sections which follow, discussing the impact of the CA upon this system. Perhaps more noteworthy for a general reader is how Besson offers a diplomatic riposte to the notion that the spread of citizenship pre-212 had become an inevitable, mechanical process, arguing that the CA was a profound step on an unfolding path rather than a rubber stamp on a fait accompli.

In the third section, Conflict of Laws, Besson addresses the thorny issue of how the CA affected the relationship between Roman and local systems of law after 212, delving into the scholarly debates of the early twentieth century, from Mitteis' Reichsrecht und Volksrecht onwards, before offering a methodical examination of the many ways in which the legal pluralism visible prior to Caracalla's reign endured into late antiquity. Besson cautions us from universalising conclusions about the introduction of the CA (231).

The overall impression offered by Besson is one in which the CA opened a new landscape of legal opportunity for the newly enfranchised citizenry but, on a practical level, did not enforce Roman legal primacy. Instead, the system continued largely unabated, with individuals and communities resorting to local or Roman law depending on the specific nature of the issue. Besson offers several case studies, but his consideration of Aphrodisias and the Jewish communities of the empire particularly stand out.

Besson shifts his focus more to the arrangements that he believes were altered significantly by the CA in his final section, Exclusive Institutions, namely the laws surrounding marriage and inheritance. Besson devotes considerable attention to questions of legitimacy for children born of marriages between people of differing status, and to the restrictions on bequeathing one's estate to a non-citizen. Through his examination of these personal status issues, Besson persuasively argues for seeing the CA as a simplifying mechanism which allowed individuals far more freedom to choose who their status and estate passed to, but with a trade-off in the form of financial obligations to the Roman state, such as the vicesima hereditatum. Another important aspect of this chapter is Besson's note that non-citizens continued to interact with (and exist within) Roman communities after 212.

Overall, this book is an impressive work of scholarship. It synthesises a remarkable amount of information into one volume and, when read from start to finish, it presents a methodical approach to the vast subject matter which gains momentum as the sections build on each other. Given the scale of the task facing Besson, it is unsurprising that some areas of this work are comparatively dense, although this is helped somewhat by the prodigious use of sub-dividing chapters throughout. Despite its density, the book was enjoyable to read; the language was effective and unpretentious, rendering it accessible even to a non-native French reader.

While Besson aims to demonstrate social change as much as juristic, it is questionable how far he achieves this, and how far non-legal historians will be able to dip into this book for information, since so much of the later sections require the background knowledge established in the earlier ones. This said, Besson's opening section offers a superb grounding for any non-expert in the topic and, more exciting to this reader, his re-evaluation of Cassius Dio's infamously negative fiscal explanation of the CA in a more technical vein was persuasive and long overdue (25-29; 349-51). The conclusion of this volume is elegant and offers a remarkably svelte synopsis of the book's important themes and information, given the weighty nature of the study as a whole.

The sheer amount of scholarship synthesised in this volume will render it a useful reference work for scholars interested in Roman legal history across a broad span, while students of the Severan era may also benefit from being able to situate the CA against a well-rounded backdrop. In this sense, the book will probably appeal more to self-consciously legal historians. There is considerable substance here for social or political historians to discover, but they will have to work a little harder to extract it.

[1] This has been a tendency in previous works, with the CA forming a crescendo of Sherwin-White's The Roman Citizenship, Oxford 19792, and anchoring the epilogue of Beard's SPQR: A History of Ancient Rome, London 2015, for example.