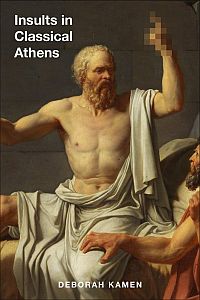 Deborah Kamen offers an engaging analysis of insults as a cultural phenomenon in democratic Athens in this well written and well researched monograph. While earlier scholars have tended to focus on invective within particular genres (especially comedy and oratory) or on the legal regulation of insults and abuse in Athens, Kamen casts her net more broadly, seeking to locate insult and its regulation within its democratic milieu and to understand its role in citizen experience. Kamen makes a significant contribution by bringing this material together and offering a balanced and intelligent assessment of it. [Disclosure: I served as a referee of an earlier version of this manuscript.]

In the introductory chapter, Kamen highlights her three main goals: to uncover the rules governing Athenian insults, which varied by context; to examine the content of these insults for evidence of what traits and behaviors Athenians condemned and by implication which ones they deemed praiseworthy; and to investigate the social functions that insults may have served and the consequences they may have had, "from bonding together individuals and communities to deeply dividing individuals from one another and from the city as a whole" (4). Kamen briefly surveys scholarship on insults in sociology, anthropology, and linguistics - she could perhaps have drawn further on this in the body of her study - before turning to focus on insults in their Athenian setting.

The main body of the book is well structured. It begins with an analysis of "benign insults" in ritual contexts and at symposia; analyzes in separate chapters insults and abuse in Old Comedy and Attic oratory that can be significantly less benign; and then considers the legal regulation of "forbidden verbal abuse" and of hubris, that is, insulting and arrogant speech and behavior. Kamen effectively uses frequent section and subsection divisions to mark out the topics she treats, and to allow for comparison of similar material across chapters (this is especially marked in the chapters on comedy and oratory). In each chapter, she devotes considerable attention to the Greek vocabulary for different sorts of insults; this discussion is illuminating not only for the Greekless reader but also for scholars interested in the nuanced distinctions expressed by different terms.

Chapter One considers first the interesting, but ill-attested, ritual mockery at Demeter festivals, including the Eleusinian Mysteries and Thesmophoria, and at Dionysiac rituals, where we hear of mockery "from wagons." Since much of the evidence comes from late scholiasts and lexicographers whose knowledge of these rituals is questionable, it is difficult to make much progress in probing the role of insult here, but Kamen assesses the testimonia with a healthy degree of skepticism and offers plausible interpretations of them. Better attested is the role of insults at symposia, which Kamen proceeds to treat briefly. Building on the idea that symposia constitute a sort of private counterpart to public rituals, she sketches out how insult could surface in a variety of ways, including in symposiasts' presentation of riddles, the skolion game, the eikasmos game in which participants sought to match each other's comparisons, and in regular symposiastic conversation. Although insults in this context could be entirely playful and benign, there was always the possibility that "mockery could lead to harsher insults and even physical violence" (33).

Chapter Two discusses the similarities and differences between ritual mockery and Old Comedy and then addresses the vexed question of whether Athenians ever restricted comic mockery. Kamen is skeptical of the late testimonia claiming that periodic measures restricted certain kinds of mockery, but does not rule out the possibility of occasional limitations, for example, during the Samian War of 440/39 BCE. The remainder of the chapter surveys the content of comic insults, especially those based on foreign origins, low class/lowly occupation, cowardice, and sexual/gender deviance, provides vivid examples of these, and looks to responses to comic insults, including the rivalry and animosity between Kleon and Aristophanes.

The structure of Chapter Three, which examines invective in Attic oratory, to a large extent mirrors that of the preceding chapter. After some initial observations on features in common between insults in comedy and oratory and on the vocabulary used to refer to oratorical invective, Kamen provides an overview of limits on the use of invective in oratory and then surveys its content, focusing on the same categories highlighted in her survey of comic invective; as in the previous chapter, vivid and often amusing examples give readers a sense of the tone and content of these insults. The chapter then briefly considers how a target might reply to the insults heaped on him by a rival.

The last two substantive chapters take up the interesting question of what insults Athenians regarded as so offensive and potentially dangerous as to warrant legal regulation. Chapter Four argues that "certain verbal insults, as well as insults issued in certain contexts, were forbidden because they had the potential either to create disorder in the city or to compromise the honor and/ or legal standing of their victim, or both" (87). After a survey of the sketchy evidence concerning Solon's laws on abusive speech, Kamen treats laws against insulting magistrates and prohibitions of certain "unspeakable" insults - calling someone a "murderer," "father beater," or "mother beater," or alleging that someone had "thrown away his shield" in battle; she takes the reasonable position that it was not that specific words were taboo but rather the concepts associated with these that could be expressed in a variety of ways. Kamen argues plausibly that "the market insult," that is, reproaching someone for working in the market, which was made illegal sometime in the mid- fourth century, was distinct from "unspeakable" insults, and the law banning this sought to "protect the citizen status specifically of the poorest and most vulnerable Athenians" (109).

Chapter Five considers hubris as a type of insult that Athenians viewed as especially malign and posits that "such insults and the attitudes underlying them were thought to threaten not only the honor of individuals (itself very serious) but also the functioning of the democratic polis" (115). The material that Kamen surveys has been worked over pretty thoroughly in the last few decades, but she offers a good overview of the ancient evidence and judicious assessment of the scholarly debate over hubris in an Athenian context. After discussing the problem of defining hubris as a term, Kamen turns to what constituted hubris in the eyes of Athenians, observing that while it could entail verbal abuse, it did not necessarily involve this; insolent and violent behavior were central to hubris. Kamen proceeds to probe the evidence for the law against hubris and for instances of individuals bringing a public suit for hubris as opposed to a private one for assault (aikeia).

One area where this study might be strengthened is in its discussion of the social and political significance of insult in Athens. Although each of the first three chapters concludes with a brief consideration of the broader functions of the insults surveyed and the final two chapters conclude with short forays into larger social and political questions, one is left wanting a bit more analysis and synthesis and the three-page concluding chapter does not remedy this. Kamen has good instincts in addressing these questions, highlighting, for example, the central role of insult in bonding citizens to one another, reinforcing shared values, distinguishing social "outsiders" from "insiders," and confirming ideals of democratic citizenship through repudiation of their opposites. A more extensive treatment of these possible functions and their interrelationship in a concluding chapter might give this study more impact and better pave the way for ensuing scholarly discussions of insult in Athens.

Nonetheless, I recommend this book strongly both to scholarly readers and a general audience - it is quite accessible thanks to its transliteration and translation of all Greek, avoidance of jargon, and highly readable prose. It would also serve admirably as a text in college classrooms in a course, for example, devoted to insults in the Greek world.