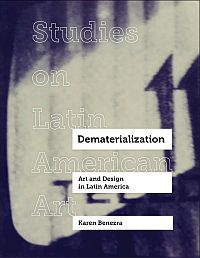 The recently published Dematerialization: Art and Design in Latin America by Karen Benezra, proposes new grounds for exploring an increasingly broad array of artworks that have at different times been described as conceptual, non-objectual, idea-based, media and performative (among others). These artistic practices became widespread internationally during the 1960s and 1970s, the temporal focus for Benezra's book, although by all accounts one can locate signs of such "dematerialized" activity from decades earlier and in full force today. In her introduction, Benezra convincingly argues for the deployment of dematerialization as a framework for interrogating what she calls "the crisis of artistic medium" in art and design of these two decades across Latin America, concentrating on case studies from Argentina, Mexico, and Chile, with a very brief mention of Brazil in the conclusion. But it is not what the art looked like, or the formal properties of these works that are at stake in her deployment of the term dematerialization, but rather how the authors and practices selected to anchor her examination "questioned the place of the aesthetic in the structure and experience of social transformation" (10).

Avoiding labeling the array of art and design works she includes as examples of conceptualism (as they most often are identified), Benezra proposes a unique cast of disparate thinkers, authors, artists and practices that "questioned the relationship between art, industrial design, and capitalism in a moment of accelerated economic development and exacerbated social contradiction" (17). The introduction presents the theoretical framework informing the author's use of dematerialization as a term of analysis. She traces its trajectory in Lucy Lippard and John Chandler's essay ("The Dematerialization of Art", 1968) and earlier yet in Oscar Masotta's 1967 talk at the Instituto Di Tella, "Después del pop: nosotros desmaterializamos" (After Pop: We Dematerialize) later published in his collection of essays Conciencia y estructura (Consciousness and Structure, 1968).

Chapter one delves deeply into Masotta's writings and influences. A unique voice in Argentina, Massota elaborated on dematerialization as a means "to see how art's turn away from modernist conventions and media renders social structure tangible, offering "a materialism of dematerialization" (31). Here, I learned that Masotta adopted the term from the Soviet constructivist artist El Lissitzky in his writing about the future of the book, which must "respond to the historical changes in our visual perception" (48). For Masotta, the application of dematerialization to art is contingent on it responding to "historical changes to the structure of signification" (48).

Chapter Two presents an in-depth examination of Mexican Nobel Laureate poet Octavio Paz's art criticism and in particular his two book-length essays on the significance of Marcel Duchamp's work, "El Castillo de la pureza" (The Castle of Purity, 1966) and "Water Always Writes in * Plural" (1973). The relationship to Masotta's dematerialization, the author points out, is that Paz's approach to Duchamp's The Bride "wrestles with a similar set of questions about defining and historicizing social totality and the subject implied by it" (68). As a poet whose work developed during a period marked by the failure of Mexico's progressive social reforms promoted in the nationalist and figurative language of Mexican muralism, Paz sought out Duchamp's work for "the role that he assigned to art in achieving social and subjective transformation" (67). For Paz, Duchamp's readymade "holds a mirror up to the social vacuity of modernist conventions by rendering everyday objects useless" (87). Deeply concerned with art's social function, Paz sees Duchamp signaling a shift away from pure contemplation toward prioritizing spectator participation with the artwork.

Benezra positions Paz as a bridge between Massotta's theoretical reflections on dematerialization and the activities of Los Grupos, a heterogenous group of artist collectives from Mexico City and the focus of Chapter Three. Here, the author centers much of her discussion on two seminal figures, the Marxist theorist Alberto Híjar Serrano, a central theoretical voice in the life of the collectives, and Felipe Ehrenberg, a member of the Proceso Pentágono group. Practicing during the late 1960s to the 80s, Los Grupos embraced diverse media and styles, but they collectively renounced the State's institutionalization of Mexican Muralism and the commercial promotion of experimental art. The collective nature of artistic labor among these different groups substantiated a Marxist desire to challenge the dictates of capitalism despite the existent failure of the Mexican Communist Party. Their relationship to dematerialization, according to Benezra, was not based solely on dismantling the materiality of the art object but on identifying art as a "locus from which to reflect the social form of labor" (105), reframing the possibilities for art's social relevance under capitalism. Or more pointedly from Hijar's perspective, "how to posit and mobilize the cooperative organization of artistic labor in relation to capitalist relations of production" (110).

The final chapter tackles industrial design spearheaded by a discussion of Cybersyn, examining a system of cybernetic management that "reconfigured the instrumental function of style for capital" (136), dematerializing both the work and the worker. The two figures pivotal for this discussion are Tomás Maldonado, an Argentine artist, and Gui Bonsiepe, a German designer of communications systems, with whom Maldonado collaborated. Bonsiepe was brought to Chile in 1968 to work on the design of user interfaces and later hired by then President Salvador Allende to head a project at the State Technology Institute (INTEC). The exchange between them dealt with form once it became a commodity as they believed in the potential for industrial design to intervene in production determined solely by consumer purposes guiding their turn away "from the object to the interface and from the metropolitan centers to the peripheries of capital" (142).

Rather than summarizing the content of the chapters, the very brief conclusion introduces Brazilian artist Hélio Oiticica's text for Tropicália as a "highly reflexive account of the social import of artistic antiformalism from 1968" (164). The unexpected inclusion of Oiticica left me wondering about the omission of other figures and authors from Benezra's narrative, and in particular the absence of women (feminist) voices who were pivotal to a discussion of this period. Without unrealistic expectation of how much territory a book can cover, I think a more robust rationale for the selection of material foregrounded would quell such questions.

What distinguishes Benezra's approach from existing publications about this period is the level of detail and nuance she affords the theory of dematerialization and the complexity of how it "articulates the aesthetic and social material of art and its role in class struggle" (110). Consequently, her approach to the social and political importance of art during this period in Latin America, avoids the pitfalls of prevailing and tired tropes surrounding political and social art. However, the unique configuration of concepts, authors and objects of art/design not normally explored together make it difficult to continually follow the logic binding the chapters together. Transitions at the beginning of each chapter would have helped the reader follow the original path she is carving.