Angela Romano: From Détente in Europe to European Détente. How the West Shaped the Helsinki CSCE, Bruxelles [u.a.]: Peter Lang 2009 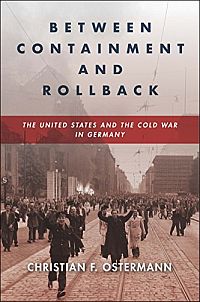 Christian Ostermann's book is a tremendous tour de force investigating U.S. policy toward East Germany from the end of World War II until the uprising of 1953 and its broader implications for the German question and European security, drawing from a broad range of materials from American, West and East German and Russian archives. Following in the footsteps of Norman Naimark and Michael Lemke, among others, the book also seeks to "write the East Germans - leadership and populace - back into history, certainly as objects of American policy, at times even as historical agents of their own" (x). Building on work by Melvyn Leffler, Bernd Stöver and Carolyn Eisenberg, Ostermann looks into the entire spectrum of American policies "between containment and rollback," including both status-quo oriented U.S. efforts as well as offensive themes such as psychological warfare and covert operations aimed at undermining and rolling back Soviet and German communist control in East Germany. The book is a must-read for everybody interested in the early Cold War and greatly benefits from Ostermann's insight and experience as well as the newly available materials that he got declassified as a leader of international efforts to gain access to the archives of former communist countries.

One particularly fascinating aspect of the book is Ostermann's ability to weave together the complexities of American policies and their ramifications for the broader European security architecture. Often, rollback and containment were pursued in parallel and in competition. Sometimes both could be combined: Between 1945 and the summer of 1947, for instance, General Lucius D. Clay pursued a policy that Ostermann describes as "rollback by cooperation," trying to implement all-German solutions aimed at extending American influence into the Soviet zone, which eventually eroded Soviet-backed communist rule in East Germany (Chapter 2). Ostermann shows how Clay's approach played out in the debates about reparations and the forced merger between KPD and SPD in the Soviet occupied zone at a point in time when George Kennan's containment turned into the main theme of U.S. policy. "The Truman administration embarked on a strategy to 'compel' the Soviet Union to abandon its international ambitions in sync with its containment policy," as Ostermann emphasizes (xi f.).

Another strength is Ostermann's capacity for meticulous analysis, taking into account the personal experiences of leaders and the overall context of events in terms of decision-making. Chapter 1, for instance, looks into the relevance of the impressions that American leaders gained when they drove through the devastated, conquered and depressed city of Berlin on their way to the Potsdam conference on the future of Germany in July 1945. President Truman's first-hand experience of the enormous Soviet removals in Berlin was a key factor in his decision to secure the Western occupation zones rather than to envisage all-German solutions and cooperation with the Soviets. Whereas Truman and his advisers had come to Potsdam with the plan to treat Germany as a unity, the outcome of the Potsdam conference "was a dramatic reversal of the plan to treat Germany as an economic unit and in good measure a result of their experience in the Soviet zone: an agreement that allowed each occupation power to serve its reparations needs from its own zone" (2).

Being in the surreal surroundings of Berlin for two weeks, Truman and Secretary of State Byrnes sensed that U.S.-Soviet cooperation in Germany was nearly impossible. As they observed, the Soviets had used their two-month occupation of West Berlin to plunder, dismantle or destroy tremendous amounts of industrial equipment: "The dismantling frenzy during the eight weeks when western Berlin was under Soviet occupation resulted in the loss of half of its industrial capacity. It would amount to 8 percent of the total Soviet removals from its occupation zone in Germany" (14). The Americans were appalled when the Soviet delegation in Potsdam wanted to consider all Soviet removals as war booty rather than reparations. This approach made it increasingly difficult to treat Germany as an economic unit.

Based on newly available Soviet sources, the book sheds new light on the origins of the Berlin crisis of 1948/49, arguing that mistaken Soviet concerns about Western "preparations for a new war" (278) and Stalin's fear of a potential collapse of the Soviet zone contributed to his decision to launch the Berlin blockade as a way to preemptively drive the Western powers out of the city. In addition, as Ostermann points out, "[r]ecently released CIA documents suggest that, with the growing conflict over Berlin brewing in the spring of 1948, U.S. officials were at least initially more concerned about risks and damage to Berlin's usefulness as a center of American intelligence and base of for [sic] anti-communist groups operating in the Soviet zone than the interruption of access to the city" (278).

Moreover, the book provides an excellent account of U.S. policy after the establishment of the GDR in 1949, which brought neither stabilization nor a Cold War settlement on the German question. Instead, as Ostermann shows, the GDR's emergence set the course for renewed confrontation and the next phase of the struggle over Germany's future. On the one hand, U.S. policymakers were concerned over Soviet subversion and propaganda. On the other hand, they launched a Western counter-offensive by calling for free elections in the whole of Germany. U.S. High Commissioner John McCloy did this on the advice of his Political and Economic Project Committee (PEPCO), whose relevance has been overlooked in the scholarly literature. McCloy believed in the so-called magnetism approach, which assumed that an economically vibrant and politically stable West Germany would have a magnetic effect on the GDR. McCloy was determined to use a combination of trade, communication, psychological warfare and non-recognition of the GDR as methods of rollback - and as a means to prevent "being rolled up" by communist propaganda (279). The question was who undermines whom and how much confidence each side had in its own abilities and strengths.

The SED's large communist youth rally "Deutschlandtreffen" in May 1950 was a major test case in this regard. Ostermann looks into the Truman Administration's concern that the estimated 500,000 participants would be used as a way to overrun West Berlin (124). U.S. and West German authorities denied entry permits to 20,000 West German youths expected to attend the Deutschlandtreffen. Moreover, Ostermann shows how the Truman Administration's efforts "were increasingly military in nature" (127), including special anti-mob drills conducted by U.S. troops in April 1950. Whereas the U.S. authorities viewed the Deutschlandtreffen of 1950 primarily in defensive terms, the August 1951 SED-sponsored World Youth Festival in Berlin was seen as a chance to influence East German youth due to its international appeal (176 ff.). This time, as Ostermann shows, the Americans were no longer worried and "sought to induce the Eastern youth to transgress the sector borders" (179). Indeed, about 680,000 of 1,4 million participants visited West Berlin to get a taste of "the forbidden fruits of capitalism" (180). American authorities saw the World Youth event as a "gain for the West" (181). Both rallies had crucial relevance as test cases in the early Cold War - and Ostermann's book looks into their impact based on Soviet, East German and newly declassified U.S. sources (279).

Last but not least, the book examines the limits of rollback and the implications of the June 1953 uprising in East Germany. In 1952, the Republican Party used its presidential campaign as a way to highlight that President Eisenhower was not prepared to accept Soviet dominance in Eastern Europe. However, Eisenhower's reaction after the suppression of the uprising in the GDR revealed that his administration was not prepared to contest Soviet power in Eastern Europe by means of force. Thus, Eisenhower and his administration failed to meet widespread expectations of American support for the protests. The United States lacked the power and the willingness to eject the Soviets from East Germany through coercion: "The extent to which rollback in Germany could be pursued was severely circumscribed by the overall American strategy in Europe," Ostermann writes: "That strategy centered on the integration of the Federal Republic of Germany into Western European economic, political and military structures, believed to be critical to prevent the resurgence of German nationalism and militarism and to boost the defense capabilities of Western Europe" (279).

Finally, the book provides a brief overview of America's policy in the years following 1953, when the Eisenhower Administration pursued food programs and large-scale technical aid to improve political conditions in East Germany. In 1954, Eisenhower launched $3 million under the Mutual Security Act to encourage inter-zonal travel and scholarships for East German students to attend the Free University of Berlin. Bonn's Ministry for all-German affairs provided U.S. funding covertly and supported some 900 organizations involved in aid to East Germany. As Ostermann points out, "U.S. financial support for what became known as 'Soviet zone projects' increased steadily, anticipating 'small step' improvements for East Germans that became the hallmark of West German Ostpolitik in the 1960s and 1970s" (283).

In a nutshell: This book is a pivotal contribution to the vast literature on Cold War Germany, writing East Germany and its people back into that history as a key issue in its own right. Ostermann's study is a model of outstanding international history, capturing the contingency and context of events leading to the division of Germany.