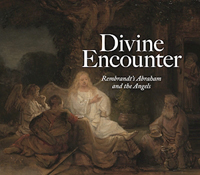 Joanna Sheers Seidenstein's Divine Encounter: Rembrandt's Abraham and the Angels accompanied an exhibition at The Frick Collection in New York. The show included one painting, Rembrandt's Abraham Entertaining the Angels of 1646, five etchings, one etched plate, and three drawings. All feature the biblical patriarch Abraham.

The book's sole inclusion is an essay, "Rembrandt and the Unseen: Perception and Revelation in the Abraham Narrative". Through an unnamed introduction and seven titled sections, the author develops a thesis that Rembrandt had "sustained engagement with the Abraham narrative and its confrontations between the material and immaterial, the visible and invisible," thereby undertaking "the ultimate artistic challenge - to represent in visual form that which cannot be seen" (60).

The focus on questions of vision and knowledge, including the potential of appearances to deceive, is especially refreshing given much recent scholarship on Dutch art, which has tended to assert the truthfulness of what the eye sees. That stated, the author applies her thesis to works that do not support it, which curtails the promising direction of her inquiry and impacts individual readings. In my view, the author also misconstrues the relation of Rembrandt's work to contemporary intellectual discourse, especially René Descartes's concept of mind-body dualism.

Joanna Sheers Seidenstein opens her essay with the story from Genesis 18 of three divine beings visiting Abraham in the guise of men - the subject of the one painting and a print. The patriarch welcomes his visitors and invites them to refresh themselves by washing their feet and taking a meal. The author rightly notes that the text does not specify what Abraham and his wife Sarah actually saw and knew. This leads her to a thematic point that in painting and print "the artist grapples, in strikingly different ways, with the nature of this divine encounter and the complexities of its representation in pictorial form" (12). Almost immediately, she expands this observation to a thesis statement covering all works in which Rembrandt depicts Abraham: "Rembrandt's depictions of Genesis 18, along with his other images of the patriarch, demonstrate the artist's evolving understanding of the relationship between sight and faith and of the nature of revelation. With these works, he raised major questions about the divine and human perception thereof" (15).

The painting is discussed at greater length in the section "The Unfolding of a Revelation". The author notes that it evinces "a disconnect between sensory perception and cognition, between sensing and understanding". She further states that "in Rembrandt's reading of the story, Abraham and Sarah are both deceived by what they see," because they suppose the angels are men (36). Put another way, the vital question concerns the reality and reliability of appearances.

In my view, the author does correctly identify the dilemma facing Rembrandt's Abraham: the angels' human appearance is deceiving. I also agree that Abraham is depicted with an impassive face. However, I cannot follow her claim that he experiences revelation about the true nature of his divine visitors and the truth of their words (32), because surely his lack of expression is antithetical to revelation, or even to understanding. To my mind, he seems studious, as if attentive to the possibility that their appearance does not reveal their true nature, without yet inducing from appearances what the reality is. There is cognition, but not understanding.

The author next argues that the artist may have understood the question posed in the text - "Is anything too great for the Lord?" - "to have been accompanied by an actual change in the visitors' appearance, or at least in the patriarch's perception of them". She concludes, "in either case, he shows human flesh transforming into the divine before Abraham's eyes" (32-4). This is an interesting (if not conclusive) reading of the angels. However, given Abraham's impassivity, the revelation unfolds not to him but to a viewer who studies the painting seriously, such as the author herself.

Joanna Sheers Seidenstein suggests that Rembrandt explores the disconnect between sensing and understanding in a way that agrees with Cartesian precepts, but she misconstrues René Descartes's views, and her association of philosopher and artist seems untenable. She refers, specifically, to Descartes's concept of mind-body dualism and quotes a passage from The Discourse on Method (37). In her view, the philosopher proposed that the eye can fail to distinguish between the physical and immaterial, and that Rembrandt incorporated such "Cartesian ideas" into his religious imagery (37-38). Later in the book, she explicitly expands her view of Descartes's thinking to five other works, as if it were a consistent theme. This is an important interdisciplinary topic that requires clarification.

Descartes's formulation of mind-body dualism was integral to his rejection of Aristotelian theories of natural law. For Aristotle and his followers, various substances are the hidden determinates of being that inform the character of everything in the universe. Such substances are immaterial and cannot be seen. They inhere in and dictate the appearance of physical matter, but materials only have an accidental relation to substances. Therefore, substance can only be induced through dialectical inquiry - a reasoning process that starts with matter and concludes in the mind. In an Aristotelian world view, then, a disconnect between sensing and knowing necessarily exists. In this conceptual framework, it would be possible to be deceived by appearances and mistake divine beings for the material men that they appear to be.

Descartes, by contrast, rejected any notion of hidden substance in matter. Hence, dualism of mind and body: the theory that both mind and matter are substance, the difference being that matter is physically extended (material and perceptible by senses) and mind is not (immaterial and imperceptible by senses). In this theory, the senses can perceive matter accurately, but the resulting knowledge can never appertain to any immaterial entity. In Descartes's view, God is immaterial, so he is only conceivable by the mind. In a Cartesian framework, then, it is impossible for a circumstance to arise in which God or another immaterial being is present but perceived as anything material: the dilemma of Rembrandt's Abraham - that he sees three men who are really divine beings - cannot occur. The author correctly identifies this as the patriarch's problem, but it is not (as she states) Cartesian - it is Aristotelian.

No divine encounter occurs in three of the show's five etchings: Abraham Casting Out Hagar and Ishmael (1637); Abraham and Isaac (1645); Abraham Caressing Isaac (dated ca. 1637-45 in the essay). The rationale for including them is that they evince qualities of suspension and anticipation that are also found in the painting Abraham Entertaining the Angels (19-26). However, the development of this subordinate theme does not integrate these prints into the author's thesis.

In a section titled The Immateriaity of the Divine," the author discusses a drawing of 1652-54 and etching of 1655. She concludes that the angel in both representations is immaterial and invisible, so they both explore a theme of "cognizance independent of sight" (42). About the drawing, she correctly states that Rembrandt depicted the patriarch as "unaware of the angel hovering over him" (38). However, surely being unaware of the angel means Abraham does not have cognizance of it, which is hard to reconcile with a theme of cognizance independent of sight.

The author also states that the etched Sacrifice of Isaac represents the angel as immaterial, so Abraham experiences a cognitive revelation independently of what he knows from his senses (41-42). She asserts that "Abraham [...] seems not to see the angel. Instead, he sees through this angelic body to the ram that is almost hidden from our view" (41). Yet, Rembrandt depicted the angel as preventing Abraham's movement by grasping his arms, and such restraint seems inherently material. The artist rendered the angel's body volumetrically, and light plays across its face and right hand, both points suggesting physicality. The claim that Abraham does not see the tangibly-rendered angel towards which he looks seems to arise from the thesis, not what is pictorially present.

The next section, "Sight Versus Faith," addresses the etching Abraham Entertaining the Angels (1656), again emphasizing "revelation as a non-visual experience" (44). The author writes that Ishmael "is key to an understanding of the image as a whole" (45). According to the author, Rembrandt depicts him not as turning away from the angels but towards his future. From this, she concludes that he is "not at all reliant on sight for his belief in the announcement of Isaac's birth or his understanding of its eventual consequences". That Rembrandt positioned Ishmael so that he faces his divinely ordained future is plausible and interesting, but there seems to be no pictorial basis for claims that he turned away because he believed what he heard in opposition to what he saw. For one thing, he seems not to be listening to the visitors, or even to be aware of them.

The author also states that Abraham "bows his head and averts his eyes from his guests in order to take in the full significance of this act of divine providence". Thereby, "Rembrandt now directly opposes sight and understanding" (49). The artist does depict the patriarch as averting his gaze, but Abraham gives no indication that he understands the true nature of his guests or the validity of their words, much less that he experiences a revelation.

The section "Sight Versus Faith" also includes short discussions of two drawings, God Making His Covenant with Abraham, and God the Father Supported by Angels (both ca. 1656-58). The first sheet represents Abraham falling on his face before God, which occurs twice in Genesis 17. Here, too, the author states that "Rembrandt presents to us what the patriarch knows to be present but cannot see or even envision" (54). However, the most relevant passage in Genesis states that "the Lord appeared to Abram," spoke to him, "and Abram fell on his face" (Gen. 17:1-3). If God "appeared to Abram," then Abram (Abraham's name before the covenant) saw God. The problem is not one of gaining knowledge about a divine being that cannot be seen.

The essay's next section, "Genesis 18 and Rembrandt's Circle," looks briefly at the impact of Rembrandt's painting and etching of Abraham Entertaining the Angels on others. Throughout the book, the author looks at the impact of pictorial traditions on Rembrandt's own depictions, and her efforts here extend such inquiry to an exchange between the master and pupils. The references are welcome reminders that however original Rembrandt's interpretations may have been, he was responsive to a tradition that also continued on after him.

In my view, the book's most important contribution to scholarship is Joanna Sheers Seidenstein's refreshing association of Rembrandt with problems of visuality, especially the nature and reliability of appearances. Another strong point is that the artist comes across as actively engaged in transforming known texts with existing pictorial traditions into new, original stories that vest authority in the artwork itself. That stated, I do believe that problems I attempt to identify above are important, including individual interpretations that often reflect the author's thesis more than what is pictorially present, and, especially, the author's formulation and application of Descartes's mind-body dualism.