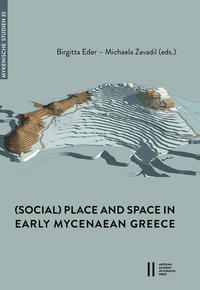 This volume contains a rich smorgasbord of new material from and ideas about an expansive array of archaeological evidence pertinent to scholarly understanding of state formation in Early Mycenaean Greece, from the 17th and 15th centuries BC. The term Early Mycenaean denotes an era during which certain characteristic features of what would become Mycenaean culture were taking shape. The volume begins with a quote from Henri Lefebvre, a prominent figure in the sociological literature on the production of space in human society, a body of work that provides the notional interpretative framing of the collection.

Following an introduction by the editors and a chapter discussing relevant issues of method and theory by James Wright, the volume is organized by region. The focus is primarily on sites in the Peloponnese. This geographical scope does not follow logically from the book's title, but the introduction makes clear that it arises from the location of the discoveries that inspired the conference (in 2016) from which the papers in the volume derive: the site of Kakovatos in Triphylia, on the central west coast of the Peloponnese. Excavations there in 2010 and 2011 uncovered an Early Mycenaean residential complex which - analyzed in tandem with a nearby tholos tomb - encouraged the editors to raise some fundamental questions surrounding "space and place" as a matter of social practice during the process of Mycenaean state formation.

Given the impetus behind the conference, papers on Early Mycenaean Triphylia fittingly constitute the jumping-off point. Other regions considered include the Ionian Islands, Messenia, Arkadia, Akhaia, Lakonia, Kythera, and the Argolid. A single paper about Kolonna on Aigina fits in a bit awkwardly as the only site east of the Corinthian Isthmus. However, given the site's trans-regional importance during the period in question, it is an understandable exception. The papers are omnivorous in subject matter, interrogating settlements, tombs, and material cultural categories in order to extract information about how Early Mycenaean societies were spatially constituted from various points of view.

Despite the theoretically informed premise of the volume, most of the papers are very data-heavy, and the majority of the text is taken up with rather straightforward presentation of new findings. Some authors (e.g., papers by Voutsaki and Galanakis) are rather thoroughgoing in incorporating social theories of space and place into their argumentation, but most go no further than relatively superficial comments appended to longer presentations of data. From a theoretical point of view, the volume does not provide particularly novel insights into the production of space and place sensu Lefebvre in an Early Mycenaean context.

That said, there is immense value in what the editors have put together here, especially in that it gathers a great deal of fresh data concerning both non-palatial regions and the new palatial site of Ayios Vasileios in Lakonia alongside novel discussion of more well-trodden areas like Messenia and the Argolid. These juxtapositions serve as fertile ground for reader insights and questions. One such question concerns which factors may have contributed to certain sites becoming apparent politico-economic centers while others - which seemed rather poised to launch forward at the start of the Mycenaean period - did not. The contribution by Philippa-Touchais, Touchais, and Balitsari on the Early Mycenaean period at Argos makes especially compelling observations on this point. Related questions seem very alive within the fascinating history of Kakovatos itself, which occupied a strategic coastal position and obviously thrived until the end of the LH IIB period, when it was destroyed and apparently abandoned. Likewise, the editors' juxtaposition of papers focused on artifacts alongside papers analyzing the built environment raises exciting questions about how and whether the 'unfolding' of meaningful space and place in the Early Mycenaean world progressed in distinct and non-parallel ways in different realms - e.g., painted decoration vs. the built environment, mortuary ritual vs. feasting practices, etc.

It is challenging to fit a volume of such scope and scale into its disciplinary landscape, insofar as the papers taken together contain multitudes. However, two takeaways seem particularly salient given current debates in Mycenaean studies. First, in the field of Aegean prehistory there is a growing sense of dissatisfaction with the notion of 'Mycenaean', 'Minoan', et al., as cultural units. The material in this book seems to demonstrate little coherence across the sites and regions discussed. This is, for example, apparent in the unusual mortuary practices - of unimposing cist tombs with hardly any grave offerings - revealed during new excavations of the North Cemetery at Ayios Vasileios in Lakonia (as presented in the paper by Voutsaki, Kardamaki, and Karadimas) - which are almost totally distinct from the 'Shaft Grave Phenomenon' known from other palatial sites. Such divergences may raise questions about whether the social, political, and ideological forces at work in the Early Mycenaean Peloponnese are better treated at the geospatial register of the micro-region or the site than at the level suggested by typical discussions of an overarching Mycenaean process.

A second area of increasing critique within Aegean prehistory concerns the way in which legacy narratives and periodizations deriving from linear 'rise and fall' models overdetermine scholarly discourse. While there has been considerable debate about the value of reconstructing a collapse at the end of the Aegean Bronze Age, the study of Mycenaean state formation has not received such acute scrutiny. The material in this volume makes rather clear that much archaeological evidence of great potential interest does not fit neatly into a unified model of evolutionary state formation. Does such evidence vitiate the likelihood that such a process is best characterized in the traditional way, as 'the rise of Mycenaean states'? Does organizing our narrative around such a rise impose a kind of temporal peripherality on the Early Mycenaean period that might hinder open-minded and creative interpretation? Such concerns certainly seem to apply when it comes to interpreting sites that flourish in the Early Mycenaean period, such as Kakovatos, but then fall off of the radar halfway through the narrative.

All in all, the book is an excellent resource for scholars looking to remain abreast of developments in fieldwork and laboratory analysis concerning the Early Mycenaean Peloponnese. Although these developments should no longer be viewed as more important or significant than those occurring elsewhere in the Aegean, study and contextualization of their material details remain crucial for efforts to develop a thorough and nuanced view of social and political transformations in the Bronze Age. The editors should be congratulated for assembling and bringing to press a remarkable collection of papers in a reasonably rapid timeline, and for making the entire volume open access and free to download as an e-book from the publisher's website.