René Brouwer: Law and Philosophy in the Late Roman Republic 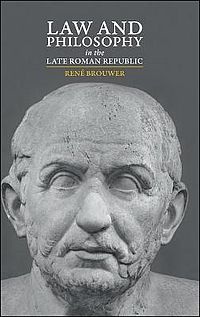 This exciting new monograph deals with a much-discussed topic in Roman-law scholarship, namely the extent to which the jurists of the Roman Republic were influenced by Greek philosophy. The topic, which will be of interest to a broad spectrum of scholars interested in the intellectual environment of the mid- to late Republic, gets a fresh airing in Brouwer's interesting book. Physically, the book is divided into eight chapters. Of these, chapters 1 and 8 cover the introduction and conclusion, while the remainder of the chapters are devoted to the substance of Brouwer's argument. The broad thrust of his argument is that the interaction between the Roman jurists and Greek (specifically Stoic) philosophy was reciprocal. Thus, instead of focusing on the extent to which the Roman jurists absorbed aspects of Greek philosophy, Brouwer argues that Greek philosophy contributed certain elements to the formation of Roman juristic thought, while Roman juristic thought, in turn, contributed to developments in Greek philosophy. This is an interesting and novel perspective which makes this book well worth reading.

The substance of Brouwer's argument is built around the idea of a "system" of law (chapter 3). His argument is that during the mid-Republic, Roman jurists were influenced by Stoic notions of "science" and its methods, specifically "division" and "definition", and that this intellectual inspiration permitted the Roman jurists to begin to conceptualise Roman law of the later Republic as a field of knowledge separate from other social systems. This broad argument is then applied in the next chapter (chapter 4) to the notion of the "rule" of law (regula iuris), its meaning, and change in function during the mid- to late Republic. This is a particularly engaging chapter brimming with insight. Chapter 5 is another case study, this time concerning the concept of "person" in law. Here, Brouwer argues that the concept of the persona, drawn from a variety of different cultural influences, becomes a concept used to systematise Roman law under the influence of Stoic philosophy.

In the final chapter of substance (chapter 7), Brouwer argues that the Roman jurists' preoccupation with the law of property and the centrality of property rights in a stable legal system migrated over to Stoic philosophy, thus leading philosophers to accept: "respect for private property [as] a central tenet of their ethical thought, more in particular in relation to their thinking about justice." (103). There is much to reflect on this chapter, specifically, since the author also ties the matter into discussions about property and justice in the early-modern period towards the end.

Brouwer has written an interesting book which will no doubt spark lively debates across many topics in Roman law and beyond. In terms of the physical production of the book, it is of the high standard one has come to expect from an imprint such as Cambridge University Press. Whatever small gremlins remain, are minor, and not worth commenting on.