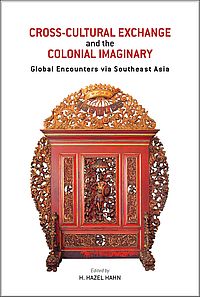 This anthology, comprising ten contributions edited by H. Hazel Hahn, is a welcome addition to the field of colonial and post-colonial studies. The book contributes excellent new research and an invaluable teaching resource, both in its introduction and in each chapter.

Despite the numerous cultures and agents mobilised across the anthology, H. Hazel Hahn lays out a nuanced mapping of the concepts and terms employed by the authors. The meaning-making that has been taking place in historical debates of the past two decades regarding terms such as "cross-cultural exchange" and its many cousins, including "hybridity" and "cultural mediation", is clearly mapped in the introduction, as is its relation to identity and nationhood (4-6). These bite-sized definitions, set in the context of Southeast Asian colonial histories, are of use to the experienced scholar and the novice researcher alike, due in part to the clarity of language and the up-to-date references.

The contributions are grouped into three main sections: Knowledge Exchange; Material and Architectural Exchange; and Leisure Exchange. Within each section the chapters span an impressive geographical and chronological range. Moreover, the overarching themes addressed by the grouping of essays make for consistency, while also letting readers come to their own conclusions. As is often the case with interdisciplinary anthologies brought together by geographical interest, real value is to be found in the moments of conversation between and across the essays.

In the first section, George Dutton mobilises a Vietnamese priest's decades' long perspective on nineteenth-century Lisbon to explore not only how his writings shed light on the cultural encounter from a Vietnamese point of view, but also how they enriched the existing travel literature about Portugal at the time. It is from this first contribution that we see the intimate conversation between the different essays begin to take shape (27). That dialogue is further evidenced when Matthew J. Schauer frames his approach to "Collecting Malay Heritage: Scholarly Societies and Imperial Policy in British Malaya in the Early Twentieth Century" referencing the following chapter by Arnout H.C. van der Meer from the beginning. Matthew J. Schauer and Arnout H.C. van der Meer both address how imperial policy structured the circulation of knowledge and how this impacted behaviour across cultural divides.

There are four essays on the relationship between ornament and space: Dawn Odell considers the use of a carved standing screen and analyses the surprising "social and ecological particularities of Batavia" (107) as revealed by the ways in which the screen resisted interpretation by its European users; H. Hazel Hahn looks for what is not there in three sacred Hindu temples shared by Vietnamese and diasporic Indian worshippers, and notes that the curious absence of narratives and commentaries about the temples from both Vietnamese and Indian perspectives "will likely cause problematic distortions" (152) in discourse that entwines Indian and Vietnamese history under colonialism; and Caroline Hebelin and Sarah Moser tackle established and longstanding areas of research into the architectural heritage of colonialism, pointing to the designs of buildings and cities as acts not simply of dominance, but also of "re-appropriation undertaken by the colonized". (163)

Sarah Moser's chapter stands out by drawing a clear line from eighteenth-century British imperial policies and their expression through city planning to present day Malaysia's administrative capital, Putrajaya, by noting how "neither styles draw (sic) inspiration from any indigenous architectural forms, materials or techniques" (202) and demonstrating the often 'inadvertent' ways that colonial era policies and methods are reproduced by contemporary governments when the primary aim is to project and sustain power (208).

The three chapters of the final section return to ways in which cross-cultural exchanges undermine the Eurocentric fantasy of dominance. While the first section to a large degree focuses on the systems underpinning counter-productive colonial policies, the final section assesses the influence of soft power cultural politics. This approach necessitates a degree of nuance that the book achieves first in its broad selection of examples and, second, in the conversations between the contributions that are maintained throughout. In considering the use and circulation of photography, Benita Stambler and Susie Protchky locate the impact of colonial strategies in Britain and the Netherlands respectively. While Stambler examines the discrepancies between photographs, etchings and texts in British publications about the kingdom of Kandy in Sri Lanka, Protchky outlines the ways in which the European bodies caught in photographic 'vignettes' meant to capture Javanese culture worked to utilise otherness to their own benefit. Finally, Frederick J. Schenker traces the ways in which Filipino jazz musicians were able to exploit the cosmopolitan nature of the jazz circuit to gain increased mobility and prosperity. These and other works constitute increasingly interdisciplinary and sophisticated endeavours to make sense of the large corpus of cultural practices that took place under colonialism in Southeast Asia and to place them within their respective visual, material, creative, social, cultural, intellectual, political, and religious contexts.

Unfortunately, what the book does not offer, despite its strong introduction, is a conclusion that speaks to the broader interpretation of a core question posed by the introduction, namely "whether and how Southeast Asia forms a cohesive region in a historical perspective". (4) Nonetheless, the volume is cohesive as a whole, and the answer may be extrapolated through the myriad ways in which the authors find opportunities for dialogue with each other, while also offering a variety of perspectives, approaches and themes.

As a whole, the book makes a convincing argument for the pervasiveness of resistance within every area of colonial life, politics, culture, and society. It is therefore positioned as a powerful challenge to the often reductive, persistently binary presentations of dominance/impotence still seen elsewhere. Ultimately, the majority of the chapters address topics that are awaiting further exploration and it is to be hoped that they act as a stimulus to scholars to incorporate the pathways forged by and for agents, materials, buildings, and the arts in Southeast Asia more fully in the interpretation of colonial history.