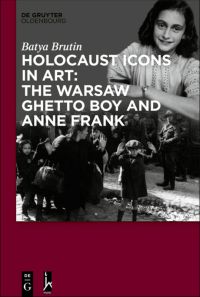 Certain images have a way of recurring in different times and places throughout the history of art and visual culture. Aby Warburg named these "Bilderfahrzeuge" (literally "image vehicles") to emphasize both their mobility - connecting different pasts with a certain present - and their dynamism - facilitating a flow of ideas and meanings. In her recent book, the renowned Israeli art historian specializing in representations of the Holocaust in art, Batya Brutin, focuses specifically on two case studies of images that re-emerge in art as well as visual culture from the second half of the twentieth century onwards. These are the photographic portraits taken of Anne Frank between 1939 and 1942, and a photograph taken during the 1943 Warsaw Ghetto Uprising of an unknown boy marching in the ghetto, hands held up while armed Nazi soldiers stand behind him. The depictions of Anne Frank and the boy from the Warsaw ghetto are instantly recognizable and, as the title of the book states, their status is indeed iconic because they function not only as specific pieces of documentation but have also come to embody the tragic fate of Jewish children during the Holocaust.

The wide circulation and recognition of the images of Anne Frank is connected to the publication of her famous diary, written while she was in hiding in Nazi occupied Amsterdam. Research projects such as "The Diaries of Anne Frank: Research - Translations - Critical Edition" conducted by the Georg-August-Universität Göttingen and the Fritz Bauer Institut pose questions regarding the global circulation of the diary and the meanings it has acquired in different socio-political contexts. Such work has, however, not been undertaken when it comes to the dissemination of images of Anne Frank.

Regarding the photograph of the boy from the Warsaw ghetto, the Holocaust scholar Jacek Leociak has reflected on why, of the many images of the Holocaust, this particular photograph has become iconic. [1] The image is so pervasive that many survivors have claimed to recognize their own face in the photograph. In his analysis, Leociak identifies specific qualities of the composition of the photograph that enable it to foster an emotional connection. He has pointed out that the boy's pain and suffering are crucially also framed by heroism. This stands in opposition to many other images of children from the Warsaw ghetto, which are difficult to look at because of the intensity of the depicted suffering and violence. They have a tragic quality that makes them unbearable for many people. This renders it impossible for the images to gain a metaphorical meaning, and they are thereby prevented from becoming iconic representations.

Brutin's book is a comprehensive study of how the images of Anne Frank and the boy from the Warsaw ghetto, though compelling for different reasons, have both emerged in artworks and visual culture of various contexts and time periods. The book consists of five richly illustrated chapters which illuminate different aspects of the use of the original archival images. The first part develops an understanding of the original images as both testimony and memory. They are situated as belonging to the historical and archival order (as evidence of facts) but also to the symbolic realm of representation and to the collective memory at large (as metaphors of history). In the first chapter, Brutin contrasts the original images with their descriptions in literary texts, thereby revealing a gap between the images and their reception, highlighting the entanglement of fact and fiction brought about due to the duplicitous status of the images. One of the poems she quotes recalls a star of David sewn onto the coat of the Warsaw ghetto boy, even though this detail is absent in the original image. Furthermore, this modification of the image stands in opposition to factual information, since the Jews in the Warsaw ghetto wore armbands with a star of David rather than the yellow star patch. This example illustrates the way iconic images become sites of convergence for different histories that seek emotional truths rather than to reconstruct historical circumstances.

In contextualizing various uses of the iconic images in artworks, Brutin primarily brings to the fore the artists' personal motivation in recalling the figures of the boy from the Warsaw ghetto and Anne Frank. In some instances, the author combines this with analysis of a larger sociological context. As demonstrated in the book, the motivations for returning to these figures are complex. The first chapter of the book reveals how the photographs became emblematic representations of the fate of Jewish children during the Holocaust. At times, the images resonated with artists' personal experiences. Such was the case for the painter Samuel Bak who survived the Holocaust as a child in Vilnius, and who worked with the image of the boy from the Warsaw ghetto continuously from the mid-1990s, rendering this figure into an impossible symbol, marked by both a sense of universalism but also anonymity. The portraits of Anne Frank have also been employed to symbolize the wider tragedy of Jewish children. However, while the original photograph of the boy also contains an image of the violence that he was subjected to, the photographs of Anne Frank show her in a more neutral setting. Artists have therefore used other means to make experiences such as those described in her diary visible. Marie Helene Ardaen and Ruth Schloss painted Anne Frank as a concentration camp inmate, while Judith Weinshall Liberman combined quotations from Anne Frank's diary with maps marking her flight from Frankfurt to Bergen Belsen.

The second chapter explores artists' motivation, rooted in deep identification with the images of Anne Frank and the boy from the Warsaw ghetto, forged by their own survival of the Holocaust. For such artists, the faces of the boy from the ghetto and Anne Frank are spaces of an uneasy recognition, marked by survivors' guilt. Brutin observes that artists of the Holocaust generation often incorporated depictions of Anne Frank or the Warsaw boy as part of their own self-portraits, merging their own faces with the iconic images. In contrast, artists from the following generation, such as Zehava Masser, employ the images differently, and rather than merging their own portraits with the archival images, they position depictions of themselves alongside the archival images, or allude to them by imitating gestures from the photographs, as Nir Hod did in a series of photographs repeating the pose of the boy from the Warsaw ghetto. While artists of the first generation chose to problematize their identification with the iconic images, artists of the second generation visualized their differing relationships to those representations and their symbolic meaning.

The third chapter tackles how the image of the boy from the Warsaw ghetto and those of Anne Frank became part of a more universal, international anti-war iconography. As the author shows, as early as in 1966, the Italian painter Renato Guttuso, who was famous for his political engagement on the left, inserted the image of the boy from the Warsaw ghetto into a painting titled "The Triumph of War." The painting also contained references to other famous artworks about the tragedy of war created by artists such as Pablo Picasso and Marc Chagall. The American artist Judy Chicago also evoked this tradition of universal protest art in her 1990 work titled "Im/balance of Power," as she juxtaposed the image of the boy from the Warsaw ghetto with other famous images showing suffering of children during wartime, including, for example, the iconic photograph of Phan Thi Kim Ph&#250c taken in Vietnam in 1972. At the same time, universalizing the boy from the Warsaw ghetto and Anne Frank into symbols of war suffering could be seen as problematic, depending on the context. One of the examples discussed in the book concerns a monument commemorating the first mass transport of prisoners to Auschwitz in 1940, which consisted of 728 Poles (mostly political prisoners) being transported from a prison in Tarn&#243w in the south of Poland. The monument, designed by architect Otto Schier in the form of a horizontal frieze that displays silhouettes of people walking towards their deportation, was unveiled in Tarn&#243w in 1975. One of the figures, a child, is clearly imitating the gesture known from the photograph of the boy from the Warsaw ghetto. Given that the monument is dedicated to Polish prisoners (it also prominently displays the letter "P" in a triangle, a symbol used in Auschwitz for Polish prisoners), the reference to the boy from the ghetto raises issues of competitive victimhood that strongly mark the landscape of Polish collective memory of World War II.</p> <p>The last two chapters deal specifically with representations of the iconic children in Israel: firstly, in connection to Zionism, and secondly in connection to contemporary political conflicts. In the works of artists such as Dora Weitzman and David Tratakover, Anne Frank and the boy from the Warsaw ghetto are positioned together with images of the founding figures of Israel, such as Theodor Herzl, or famous photographs depicting the Eichmann trial, a turning point in the recognition of the Holocaust. In this way, the image of the boy from the Warsaw ghetto and Anne Frank are incorporated as cornerstones of the Jewish state. In this merging of historical and contemporary events, the children of the Holocaust are also transformed from victims into fighters, standing for both past and current causes.</p> <p>The generously illustrated volume is full of examples that illustrate the paradoxical and fascinating status of the images of Anne Frank and the boy from the Warsaw ghetto. On the one hand, their importance and iconic recognition is restated every time they are recalled. On the other hand, as they are used and re-used, again and again, to stand for different causes, their own meaning becomes blurred, a phenomenon Brutin refers to as "dissolving memory" and the creation of a "facelessness of the iconic images." The book constitutes a very detailed account tracing the appearance of the images of Anne Frank and the boy from the Warsaw ghetto from the late twentieth to early twenty-first century, and will be of interest to art historians and scholars of memory studies.</p> <p><br /><span class="underline">Note</span>:</p> <p>[<a href="#fna1" name="fn1">1</a>] Jacek Leociak: Dzieci Holocaustu. Awers i rewers [Children of the Holocaust. Obverse and Reverse], in: W&#321odzimierz Bolecki / Ryszard Nycz (eds.): Poetyka, polityka, retoryka, Warszawa 2006, 50-60.</p> <p class="italic" style="text-align: right">Agata Pietrasik</p> </div> </div> </div> <div id="page_footer"> <div class="ie6_font_size" id="separator"></div> <p>issn 1618-6168 / www.sehepunkte.de <img height="10" src="/images/sp10.jpg" width="10"> </p> </div> </div> </body> </html>