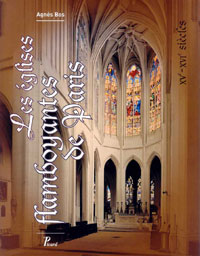 It is perhaps a commonplace in the scholarship of French Late Gothic architecture to note its marginalized status in the history of art. In the country that had formulated High Gothic, the articulation of its late phase was understood as exaggerated and essentially decorative. The continuity of building practice explored in studies on late Medieval German and English architecture was largely rejected in the discussion of French examples. This is not entirely the fault of prejudiced scholars or a hostile public. Late Gothic monuments are, in general, smaller than their High Gothic counterparts, regionally distinctive and frequently partial. In the last decade, the publication of numerous studies on Late Gothic architecture belies the claim of under-representation. Bos' book makes an important contribution to this burgeoning field of inquiry. In this carefully researched and lucidly written study, Bos introduces the reader to the religious buildings and builders of late medieval Paris, addressing issues of construction, workshop organization, the roles of builder and patron, and particular building chronologies.

Part One introduces Paris after the English occupation and surveys the state of the city's churches. The repair and rebuilding of so many of these churches during the second half of the fifteenth and into the sixteenth century reflect the idiosyncrasies of the capital. Larger, more populous, Paris produced enough wealth to support these major projects, but also fostered an unprecedented level of social competition expressed in architectural terms.

Part Two addresses the clients, the head of the workshop and the relations between the two. For the first group, Bos concentrates on parish organization rather than monastic patronage, the Office of the Fabric (Œuvre et Fabrique), the parish wardens and their responsibilities. As parishes, both urban and rural, became more clearly defined in administrative and topographical terms, parishioners became increasingly responsible for the upkeep of their church and its appurtenances. Although it is helpful to acknowledge differences in professions among the wardens and the variability in budgets from parish to parish, it is more important to fix the larger implications for building in Paris. Because of their multiplicity, the parishes of Paris had no municipal bond. This produced greater autonomy for the Fabrics but abetted inherent competition as well. These trends clearly colluded in the production of churches that were ambitious in scale but restrained in decoration, experimental yet referential.

The following chapter traces the development of the building profession, its organization and regulation. In the first sections, Bos addresses the complex question of the identity of the master builders. Documentary evidence beyond contracts and epitaphs does not allow a full picture of even the most highly regarded builders working in Paris. In this chapter, the division between overview and monographic articles is most problematic. When Bos presents an intriguing assertion - that a mason named Marande was probably the author of the plan of St.-Etienne-du-Mont, for example - the reader wants greater documentation than that provided by the brief footnote that accompanies it. Bos does indeed direct the reader to the article in which her assertions are clearly laid out, but this bifurcates the reader's attention. A paucity of archival evidence necessitates a brief discussion of the relations between the clients and their builders, most drawn from the contracts and parish archives. There is sufficient evidence to demonstrate that patrons solicited designs and elevations of their churches. Evidence also suggests that a representative of the client, either a clerk of the works or the wardens, worked in concert with the head of the workshop to determine the form of the building, the degree of its decoration and the course of its progress.

Part Three concerns the workshops themselves; how they were financed, the members of the team, their materials and daily activities. As is frequently the case, a dearth of archival documentation disallows generalizations about the size of particular workshops or the salaries of their workers. The exceptions to these lacunae include the construction of the façade of St.-Martin-des-Champs in 1455-56. Her breakdown of the Fabric accounts of St.-Étienne-du-Mont (1490-1519) give the reader a rich picture of an active workshop with the expected personnel to those who supplied the workshop with sand, lime, wood, stone and lead. The materials used for construction arrived mostly by river and were available, like other goods, at designated ports. But Bos' research reveals numerous locations for the purchase of stone not mentioned in other sources like the accounts of the city. She surmises that multiple locations might have served, a reasonable assumption given the difficulty of moving heavy materials through the city to various sites.

However, contracts for wood provided to the workshops by specialized merchants rarely mention the provenance of the material. As Bos notes, wood was an expensive investment that could account for up to twenty percent of a project's total.

Part Four compactly identifies the characteristics of Parisian religious architecture in the Late Gothic period, focusing necessarily on extant parish churches. In terms of plan, Notre-Dame provides the most important template with its double ambulatory and double side aisles flanked by chapels between the buttresses (see St.-Germain-l'Auxerrois, St.-Séverin etc.). What Bos touches on but does not address directly are the meanings those borrowings conveyed to their audience. Were connections between St.-Germain-l'Auxerrois, the second most prestigious church in the city, and the bishop's church expressed in the plan? Did the rejection of that plan type signal a change in fashion or the independence of certain communities from the metropolitan?

The most intriguing chapter of this section discusses the evolution of Parisian Late Gothic, the question of a Parisian style, and reciprocal influences with provincial building centers. The relatively long period enjoyed by the Rayonnant gave Paris a later start on developing its Flamboyant vocabulary. The simplicity cited in earlier chapters and explained by descriptions of the client base and its priorities resulted in what Bos terms, "an architecture of austerity" but, she is quick to counter, not one of sterility. Reviewing the entirety of Bos' analysis, I was struck by the way in which builders in the capital were open to outside influences, transforming them to suit a Parisian audience. Bourges and St.-Remi in Reims are two possibilities she asks us to consider. To this list I would also add the chapel at St.-Germer-de-Fly, St.-Étienne in Beauvais and the parish churches of Troyes. Masters like Martin Chambiges travelled widely, dispersing and absorbing new influences and bringing them back to the capital.

Paradoxically, the shortest section of this review belongs to the largest and most important part of Bos' book: the forty-three articles on each of the churches. Bos expands our knowledge of no longer extant churches like St.-Benoit with archival documentation and useful reproductions. But her great achievement emerges in the articles on St.-Étienne-du-Mont, arguably the centrepiece of the entire study, and St.-Germain-l'Auxerrois. In the monograph on St.-Étienne-du-Mont, she clarifies the construction chronology and convincingly explains the addition of the balustrade that encompasses the piers of the choir. Wardens' fears for the stability of the church prompted steps that would consolidate the edifice at the same time introducing a motif in keeping with shifting tastes. The Bourges-inspired audacity of the original choir, conceived in the first years of the century had, thirty years gone, become a liability.

Another article of singular importance is the one discussing St.-Germain-l'Auxerrois. Although other scholars have clarified the fragmented course of construction, Bos is the first to set these observations in a coherent narrative from start to finish. Further, her technical and documentary savvy combine to explicate the tortured history of the celebrated western porch, first built in the thirteenth century and modified in the sixteenth. She also makes a careful case for the function of the porch as a parish structure, of particular need in a building also occupied by a large college of canons. The only quibble with this section is the lack of comprehensive bibliography. While Bos does an excellent job of citing recent research it would be helpful to have a list of the earlier works as well. Despite these minor criticisms, one must, in the end, appreciate the depth and variety of this project and the attention to detail evident not only in the research but in the editing as well.