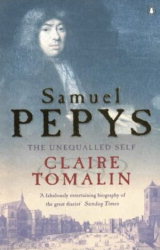 For nine years Samuel Pepys (1633-1703) kept what has become the most famous diary in the English language. Pepys was 27 when he began his journal in 1660 and 36 when he ceased in 1669. There was an entry for every day of the nine years, except for eleven days in September-October of 1668. Diaries for other than purely spiritual purposes were rare in the seventeenth century, though Pepys's friend, John Evelyn (1620-1706) was creating another, first published in 1818. Pepys's diary was not meant for the public, or indeed, for other eyes than his own. It was written in the shorthand developed, and published, earlier in the seventeenth century by Thomas Shelton, and was further obscured (to English eyes) by snatches of freely adapted French, Spanish, and Italian.

Most of the diary concerns Pepys's consuming work as a high ranking royal servant during a formative period of the Royal Navy, but substantial space is devoted to social, political, financial, and sexual adventures, as well as to frequent medical and matrimonial crises. The complete diary, in Pepys's hand, survived in six leather-bound volumes that were part of the valuable library that he collected and, at his death, willed to Magdalene College, Cambridge, where he had been a student from 1651-54. There, with his other books, it remains. More than a century after his death, notice began to be taken of it, but the existence of so many "objectionable" (id est, sexually revelatory) passages caused it to be published in expurgated form. Only since the 1970s has a scholarly, unexpurgated edition of the diary been available, edited by Robert Latham and William Matthews (London and Berkeley, California, 1970-77).

Prior to the Latham-Matthews edition, Pepys was best known and appreciated for his descriptions of great events: the executions of the regicides at the Restoration, the plague of the spring and summer of 1665, the great London fire of 2-5 September 1666, or the brilliant attack by the Dutch on the Royal Navy in the home waters of the Medway (June 1667). Those accounts were so graphic, lively, and knowledgeable that they became almost inevitable illustrations for modern narratives of the 1660s. Further, one could find in the expurgated diary the rhythm of a successful late seventeenth-century Londoner's life. But it is only since the Latham-Matthews edition that one can also observe the private and intimate affairs of this man-about-town.

Claire Tomalin is not an academic historian, but the author, 'inter alia', of six previous biographies, five of them of English women. Biographers sometimes skim across the surface, dipping down into the past to pilfer fragments that fill out their narrative. The past from which this matter is extracted may be of little interest to them except as a stage or location for their subjects, and they can be oblivious to the large questions which occupy reflective historians. On the other hand, a skilful biographer can accomplish what few academic monographs manage: to illuminate a surrounding world through portrayal of an individual member of it.

As a seventeenth-century figure, Pepys lacks the importance of a Charles I, an Archbishop Laud, or an Oliver Cromwell. He was not a great poet or scientist like John Milton or Robert Boyle, though he was an early and enthusiastic member of the Royal Society. But if he was not a major figure, his world was also not a quiet backwater, like that of the now well-known diary-keeper, Ralph Josselin, the Puritan-inclined clergyman of Earls Colne, Essex, who kept a diary from the mid-1640s until his death in 1683. Pepys's world was the very center of things. Like many Londoners, he had links with the countryside (in his case, the tiny shire of Huntingdon), but like few Londoners he had a crucial familial connection to the gentry in his wealthy cousin Edward Montagu (1625-72), created first earl of Sandwich at the Restoration. If extraordinary talent and energy were the keys to Pepys's success, Sandwich's patronage was no less important. Indeed, Pepys followed Sandwich's nimble footsteps from loyalty to Cromwell to loyalty to the restored Stuarts. Both men rose, while many of their former Cromwellian comrades suffered demotion, disgrace, or even death because of a taint of disloyalty to the Crown in the turbulent 1640s and 50s.

We do not need Claire Tomalin, or any biographer, to read Pepys's diary for ourselves, but it is a long task, and there is much chaff among the wheat. To sample it more efficiently, there is 'The Illustrated Pepys', selections from the unexpurgated diary, edited by one of its editors, Robert Latham. (Berkeley and Los Angeles, 1978). But Claire Tomalin gives us a sensitive and learned distillation of the diary and, more importantly, an account of Pepys's life after the diary ends in 1669. He lived another thirty-four years, and what befell him, both professionally and personally, is instructive. As "Whiggish" outrage against Charles and James erupted in the late 1670s, Pepys came to be hounded for his loyalty to them. Both princes magnanimously overlooked the republican taint of Pepys's youth and rewarded him for his diligent service after the Restoration. But Pepys was caught up in the wave of renewed anti-Stuart feeling that culminated in the "Glorious Revolution" of 1688. Having survived his loyalty to Cromwell, he suffered for his loyalty to Charles, and particularly to the openly Catholic James.

Tomalin's Pepys was not a religious man, but he was a superficially observant Anglican, with no evident leanings to Roman Catholicism. Nevertheless, he was unjustifiably accused of popery and hounded from office after the Revolution, an illustration of the depth of division which lingered in English society at the end of a turbulent century. Personally, Pepys never recovered from the death in 1669 of his beautiful wife, Elizabeth St. Michel, to whom he had been so frequently unfaithful. She had borne no children, and Pepys never remarried, but from about 1670, he took as a mistress Mary Skinner, the daughter of a modest London merchant, and in Tomalin's words she "remained with him until the end of his life, accepted by his friends and her family as his consort" (xxv).

Though something of a polymath and filled with energy, curiosity, and enthusiasm for life, Pepys was hardly a paragon. In his womanizing he used social position, office, money, admiralty yachts, whatever he could get his hands on, to woo the female objects of his desire and to overcome any resistance. Tomalin's graceful biography does not attempt to judge him, but to provide the most sympathetic portrait possible. Her study is well illustrated and abundantly annotated. It comes with a genealogy, useful maps, and an eleven-page "List of Principal Figures". Biography is always, to some degree, a matter of conjecture, and some of Tomalin's interpretation will undoubtedly be challenged. But she has created an appealing, wise and thoughtful window into the past. She has made Pepys's Diary, and the story of its author's life more accessible, and underlined the enduring richness of both.