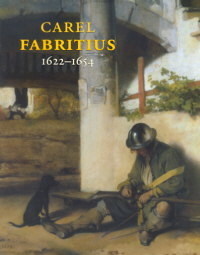 It's taken 350 years for the seventeenth-century Dutch painter Carel Fabritius (1622-1654) to secure a monographic exhibition gathering together all eleven of his extant paintings. A small oeuvre even by the standards of Vermeer and a complex one; a life sensationally cut short in a devastating munitions explosion in Delft; a reputation as Rembrandt's most talented pupil: Fabritius makes a compelling figure, especially when several of his works are masterpieces yet few know his name.

Renowned mainly for the Delft works produced near the end of his life through their frequent inclusion in surveys of Dutch, and particularly Delft, painting, Fabritius was little known outside scholarly circles though much admired within them. Christopher Brown's foundational 1981 monograph had long represented the last word on the subject. [1] For several reasons it was time for reappraisal and the recent exhibition, "Carel Fabritius 1622-1654 - Young Master Painter", in The Hague and Schwerin, made good use of the intervening years. A certain momentum has been building around Fabritius. New attributions, beginning in 1985, increased the number of his early works and have sparked interest in the oeuvre. A 2001 exhibition, "Vermeer and the Delft School", at the Metropolitan Museum, New York and the National Gallery, London, featured his five most famous paintings. Additionally, in conjunction with the recent exhibition two symposia were convened to discuss matters associated with restoration, attribution, and oeuvre formation. [2]

The exhibition's two venues showed all of the paintings securely attributed to Fabritius, each venue displaying differing accompanying works, though both lacking some important comparative ones. A stated goal of the exhibition was to place secure works alongside less certain ones for the sake of comparison and research (7). The exhibition catalogue, translated into the three languages most closely associated with Fabritius scholarship and collecting - German, Dutch, and English - also participates in the spirit of continuing discovery; it should be thought of as a point of departure rather than a definitive conclusion.

A slim volume, Carel Fabritius 1622-1654, is beautifully produced and thoughtfully argued. Its refreshing evenhanded treatment of evidence is not always available in current American discourse. Frederik J. Duparc, director of the Royal Picture Gallery Mauritshuis, The Hague, writes the introductory essay; curators Gero Seelig of the Staatliches Museum, Schwerin, and Ariane van Suchtelen of the Mauritshuis author the catalogue entries. The exhibition catalogue picks up where Brown's monograph left off, treating new developments in the corpus, consolidating pictorial evidence and summarizing previous arguments. It does not replicate the invaluable archival sources published in Dutch and English in the earlier book and only infrequently challenges its attributions. It appears that no new archival evidence or new interpretations of existing documents has been brought to bear upon the painter or his work, indicating that standing suppositions about Fabritius remain in place.

Reordering the chronology, based on painstaking connoisseurship and stylistic analysis, the authors list twelve autograph works (cat. nos. 1-12), increasing the number from the eight published by Brown. They consolidate the majority opinion regarding a rejected painting - Man in a Helmet, in Groningen - still accepted by Brown (cat. no. 13). In his essay, Duparc maintains the deattribution of several paintings and entertains the attribution of others suggested by the Rembrandt Research Project. The authors present a portrait in the Alte Pinakothek, Munich, as a self-portrait by Carel, an attribution I doubt and instead assign to Carel's younger brother, Barent (cat. no. 4). [3]

In his detailed, thorough essay Duparc reprises what little is known of Fabritius's life, the history of his works' reception, and the problematic of the oeuvre - its extremely diverse and disjunctive quality. While Duparc divides the oeuvre into three rough periods, for the purposes of this review it is sufficient to separate it into two, the early history paintings indebted to Rembrandt and the later more famous ones produced in Delft. Two paintings, a portrait and a self-portrait, help bridge the radical division between traditional pictures depicting mythological or biblical stories, and those concerned with various optical effects and issues of representation. That one small oeuvre contains so many different endeavors defies easy categorization. Duparc attempts to address the pictorial divide in his essay, suggesting that perhaps other paintings attributable to Fabritius may come to light and fill in some of the gaps (20-21).

Yet I believe that the problematic of the oeuvre also contains its strength - the hybrid and heterogeneous nature of the experimental project; if one tends towards this opinion, the catalogue's treatment of Fabritius is more tease than strip. Where its authors, and Brown before them, conclude their interpretations is precisely the point where Fabritius's significance begins. That Fabritius's paintings are considered interpretively intractable may be due to their high degree of ambiguity - pictorial, thematic, and generic. In fact, their open-ended complexity accounts for our fascination with them. Though a fraught concept in art history, ambiguity and its activation comprise Fabritius's experimental methodology. The Sentry, 1654 (cat. no. 12), is a case in point, though analogous arguments pertain to all of the Delft paintings. Universally characterized as enigmatic, The Sentry depicts a scene whose subject and spatial construction deliberately resist interpretation.

A sleepy-looking, absorbed sentry sits sprawled in an architecturally crowded welter of walls, stairs, arch and column; the scene presents a fragmented and densely layered corner of a city, where architectural elements stand in irrational relationship, all clues and no solution. Though naturalistically rendered, the undefined space and occupation of the sentry bewilder. A faux stone relief inscribed with the figure of St Antony Abbot, identified by his attribute, the pig, and, significantly, decapitated by the top edge of the picture comprises the sole iconographic element of the painting, in a comparison of diligence and dereliction that has never exhausted the picture's complexity. The theme neither sufficiently allegorical nor narrative, the space neither conforming to the rules of perspective nor the expectations of architecture, the picture's irresolvable ambiguities turn the experience of viewing back onto the viewer himself. Whereas in his catalogue entry Seelig appears ready to regularize what Fabritius distorted, The Sentry, irregularities intact, amounts to a painted disquisition on issues of vision and representation, as complex an image as Vermeer's painted essay on art and history in his Art of Painting, c.1666-67, or Velázquez's self-conscious meditation on representation in Las Meniñas, 1656. Even the early, lesser-known paintings, analyzed by Seelig individually and as a group for the first time, bringing into synthesis Fabritius's initial themes and technique, reveal the artist's innovative tendencies: his exploiting unusual themes or moments in a narrative render virtually every painting an experiment. While most known for his Delft work, his early paintings show both Fabritius's connection to Rembrandt, in whose studio he worked, and innovations that presage the unusual experiments he later undertook.

Prior to the exhibition, several lending institutions restored their Fabritius holdings, well documented in the catalogue. [4] Three restored paintings in particular - the Portrait of Abraham de Potter, The Goldfinch, and The Sentry - uncovered startling revelations, elements that affect how the paintings must be read. Not only was a previous debate over the date (1649) of the Portrait of Abraham de Potter settled, but there appeared in the painting an astonishing trompe l'oeil nail complete with shadow, placed between the two-dimensional inscription of the sitter and the signature of the painter, testifying to Fabritius's early interest in material illusionist effects. With this painting and The Goldfinch, its own illusionism heightened through cleaning, Van Suchtelen notes the importance Fabritius places on painted wall surfaces (118-19), an interest that Vermeer will also take up. Upon restoration, The Sentry, too, revealed a most surprising and incongruous addition: the fragmented figure of an officer glimpsed in the slim vista between arch and wall, complicating the previous neat symmetry contrasting lowly soldier and lofty monk with an almost cinematic element. [5]

The German translation departs from the Dutch and English versions in ways reflective of differing curatorial opinions and local allegiances. The German catalogue, listing separate sources in funding, features The Sentry - one of their holdings - on its cover whereas the Dutch and English versions show The Goldfinch, of the Mauritshuis. Concerning matters of content, the German edition includes an extra catalogue entry, the Hanover Portrait of a Woman in Profile, 1654, a painting generally attributed to Barent and so identified by Duparc in his essay. It also includes a largely confused essay by Kornelia von Berswordt-Wallrabe, director of the Schwerin Museum, on aspects of composition in Fabritius's paintings.

Exhibition and catalogue provide both a pivotal moment, an unprecedented gathering of Fabritius paintings, scholarship, and public attention, and a platform from which to answer the questions they raise. Nonetheless, the weight of the entire undertaking has subtly but surely shifted Fabritius's position from a recondite subject, dogged by an apprenticeship to Rembrandt, to a master in his own right. This is more than enough, indeed resplendent enough, for any one exhibition.

[2] The first symposium was sponsored by the Netherlands Institute for Art History (Rijksbureau voor Kunsthistorische Documentatie, RKD) and the Mauritshuis, The Hague, December 2, 2004; the second by the Staatliches Museum Schwerin, May 28, 2005.

[5] I owe this apt locution to Kees Kaldenbach.