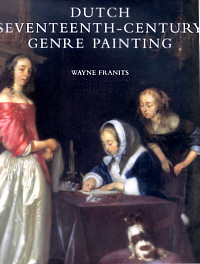 Scholarly perspectives on Dutch genre paintings of the seventeenth century abound in critical differences. One of the crucial points within this ongoing dialogue is whether these "images of unheroic forms of life," as genre paintings have often been called, were created principally to satisfy a cultural premium on verisimilitude, or were intended to serve as deeply encoded "conversation pieces" on the mores of the day. And yet, despite a voluminous literature on this subject, there have been very few attempts to provide a synthetic account of peintures de genre, perhaps the single most influential category of pictorial representation from the Dutch Golden Age.

Reference works have generally consisted of exhibition catalogues, such as the 1976 volume by Eddy de Jongh et. al., Tot lering en vermaak: betekenissen van Hollandse genrevoorstellingen uit de zeventiende eeuw, accompanying a seminal exhibition at the Rijksmuseum, or Peter Sutton's Masters of Seventeenth-Century Dutch Genre Painting, published in 1984 on the occasion of the first great presentation of this genre to the American public at the Philadelphia Museum of Art.

For this reason alone, Wayne Franits's study of the thematic and stylistic development of genre painting in seventeenth-century Holland is a welcome addition to the literature in the field. Handsomely produced by Yale University Press, his book is comprehensive in scope, admirably evenhanded in terms of methodology, and written with a wide-ranging readership in mind. Taken together, these qualities will make it indispensable for scholarly and non-specialist audiences alike.

Right from the introduction, Franits acknowledges that the task of writing a systematic overview of Dutch genre paintings is wrought with potential problems. One inherent complication arises from the "startling variety" of images that can be accommodated by this definition (1). Another, as noted above, comes from the disparate critical voices concerning the meaning of these "clever fictions" that can so seductively posture as "scenes of daily life" (ibid.). For Franits, who provides an excellent overview of this, often contentious scholarly debate, one possible way to reconcile the opposing views is to highlight the conventionality of the genre paintings - conventionality in terms of pictorial traditions, recurring themes, cultivation of particular styles, sensitivity to viewing habits, and, perhaps most importantly, responsiveness to market demands.

With conventionality as a conceptual key to this study, the material is organized in three large sections, each of which is delineated by historic milestones. The first period begins with the Twelve-year truce of 1609 that spelled the independence of the Dutch Republic, and its formal recognition with the 1648 Treaty of Munster. The second one extends until 1672 as the "year of the disaster", when the Republic was seriously compromised by the Anglo-French-German coalition led by Louis IX, while the third one marks the de-facto end of the House of Orange with the death of William III in 1702. Each of these sections is further divided into chapters dealing with different artistic centers or "local schools", in accordance with traditional art-historical approaches to this subject.

Though defined by eminently relevant socio-cultural parameters, this structure is necessarily limiting, as indicated by the author's decision to give a separate chapter to Jan Steen - the comic genius notorious, among other things, for his peripatetic character. Similarly, following the introduction on section two - the age of the greatest prosperity of the Republic (1648-1672) - Franits proceeds with a chapter on Gerard ter Borch (1617-1681) and his student Caspar Netscher (1635/6-1684), two painters who are equally elusive in terms of local identity, yet whose depictions of upper-class interiors exemplify the growing taste for elegance in subject matter and style during this period. One almost wishes that Franits had extended such a treatment to Johannes Vermeer (1632-1675), a painter whom he addresses in the Delft school chapters within the second, as well as the third section, despite his conceptual and formal uniqueness vis a vis other "small masters," and despite the fact that many of his paintings, especially those attributed to the last years of his life, are rather tenuously dated.

Overall, a greater license with regard to chronological and geographical criteria would have allowed Franits to bring into a sharper focus the "stylistic" and "thematic" evolution of Dutch genre painting announced in the book's subtitle. While he does provide very good summaries of the respective socio-political and artistic developments within the three principal periods, these introductions are, of necessity, rather concise, leaving the reader to wonder if separate chapters on the sixteenth-century roots of the Dutch genre painting, or on its status in contemporary art theory, would not have been in order. In the present form, such issues are touched upon chiefly in the chapters on individual painters. The manner in which Flemish pictorial traditions of the sixteenth century provided an impetus for the development of Dutch painting is addressed in the opening section of the book, within the chapter on the school of Haarlem. In view of the extent and the fluidity of the artistic exchange between the catholic south and the protestant north, the question of the Flemish "precedents" would have been better served by a separate discussion, possibly within an expanded introductory segment of the volume, rather than within one of the local schools, as is the case at present. The same can be said about the discussion of Dutch classicism, exemplified by the work of late-seventeenth century painters such as Godfried Schalcken (1643-1706), Eglon van der Neer (1634-1703), and Adriaen van der Werff (1659-1722). While Franits groups them together, the closing chapter of the book in which they are situated would have gained from a more in-depth discussion of the Dutch champion of classicism Gerard de Lairesse (1640-1711), whose ideas on the place of genre painting in the hierarchy of the visual arts provide an important theoretical coda to this category of representation at the end of the period under investigation.

Notwithstanding these caveats, the virtues of Franits's synthetic approach are amply in evidence, both in terms of the comprehensiveness of his study, and in his balanced overviews of the individual artists. This is especially important with artists whose work has engendered substantive critical dialogue, such as the Leiden master of the "fine manner", Gerrit Dou (1613-1675). In a characteristically well-organized chapter, the author presents us with the pertinent facts about Dou's long and fruitful career, the salient characteristics of his oeuvre, and his critical fortune, eschewing methodological preferences for the sake of unprejudiced account of the current state of scholarship on the subject. Similarly, in his chapters on local artistic centers, he consistently draws our attention to painters working in modes parallel with mainstream movements, such as the Utrecht painter Jacob Duck (1600-1667) versus his more famous contemporaries, collectively known as the Utrecht Caravaggisti. Most importantly, with this exhaustive and up-to-date study, Wayne Franits gives to scholars and general readers alike a remarkably inclusive perspective on the rich, heterogeneous, and often unwieldy corpus of seventeenth-century Dutch genre painting, as well as on its equally complex critical legacy.

Regrettably, publication schedules precluded the author from taking into account two other recent assessments of the origins, nature, and changing roles of "genre" painting in sixteenth and seventeenth-century Netherlands. These are Nanette Salomon's Shifting Priorities: Gender and Genre in Seventeenth-Century Dutch Painting (Stanford 2004) and Larry Silver's Peasant Scenes and Landscapes: The Rise of Pictorial Genres in the Antwerp Art Market (Philadelphia 2005). Very different in their respective emphases, these books are, nonetheless, complementary to Franits's study, and affirm his salient thesis that the Dutch genre paintings of the seventeenth century are not "mirrors of daily life", but mirrors reflecting artistic conventions and audience expectations, as well as the efforts of an unprecedented number of painters to secure critical and financial recognition in what was arguably the most open art market in early modern Europe.