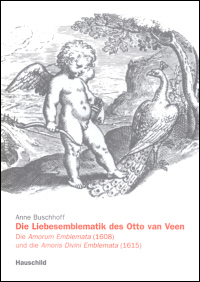 There is a tragic side to Otto van Veen's main claims to fame. In modern historiography Van Veen (1556-1629), who latinised his name to Otho Vaenius, is first of all known as the teacher of Peter Paul Rubens. His name is furthermore attached to the genre of emblemata (Emblemata Horatiana, 1607), and the development of the love emblem in particular (Amorum emblemata, 1608, and the Amorum divini emblemata, 1615). In fact, Van Veen was one of the most prominent artists in the Southern Netherlands, until he was overshadowed by Rubens, soon after the latter's return from Italy in 1608. Although there is no direct correlation - Van Veen's interest in the emblem was kindled earlier - it is still intriguing to notice the circumstances surrounding his specialization from painter to emblematist. Did Van Veen turn to the popular genre to compensate for dwindling patronage? What can it tell us about the artistic status of the emblem and its inventor? Did the learned, humanistic profile of these works help, smoothen his transition from a succesful artist to a responsible official as mint-master and guild official?

For an answer to these questions the book under review offers a new starting-point (esp. 135-140). First and foremost, however, Buschhoff offers a detailed analysis of the works themselves. Her book presents a comprehensive study of Van Veen's worldly and spiritual emblems, including an extensive appendix with full translations of the works and four indices (two for the mottos from either works, one for names and subject, and one for emblematic motifs). [1] The work is richly illustrated and beautifully produced.

The main aims of the study are (rightly) quite straightforward. The author wants to make an "Analyse der Texte und Stiche beider Emblemfolgen unter besonderer Berücksichtigung der literarischen und bildkünstlerischen Quellen" and, with this, to offer "ein Instrumentarium für den Umgang mit beiden Liebesemblembüchern" (12). She starts off with an introduction to the genesis of the Amorum emblemata in the context of the new, humanistic vogue of the love emblem (chapters B and C). The next chapter provides a systematic, descriptive analysis of the work, considering its texts (including the dedicatory epigrams, Latin quotations and polyglot verses), the engravings, its sources, its rhetorical strategies and forms of reception (from literary translations and adaptations to its influence in paintings and architecture). This reveals an impressive range of sources and a rich variety of ways in which they were employed. This is useful in itself, but it also prompts new, more awkward questions, which Buschhoff does not address, such as those about the nature of reception and its implications for the interpretation: what do classical sources actually reveal? Do they point to an intertextual way of reading, based on the aesthetics of erudition? Or are we rather dealing with commonplaces, and should the sources be considered as rhetorical authorities? The use of intermediate sources, such as the commonplace book of Josephus Langius for instance, further complicates this picture. This is particularly pertinent for the quotations used in Van Veen's spiritual emblems, which are the subject of the next part of the book.

The Amorum divini emblemata had hitherto attracted less scholarly attention than its secular counterpart. Buschhoff happily redresses this imbalance. Apart from the source analysis in chapter I (approached in a similar fashion as in chapter D), she offers an extensive contextualization in chapters E to H. Buschhoff first deals with the genesis of the book against the background of the patronage Van Veen received from the archdukes Albert and Isabella of Austria, who jointly governed the Southern Netherlands in these years (chapters E, F and G). Van Veen's work is often situated in the heart of the religious programme of the Counter-Reformation: the work was to serve as an instrument for Catholic meditation, not unlike other devotional tools, such as the images of saints. However, as Buschhoff shows, the exact place of the book in Isabella's religious programme remains unclear. Van Veen's statements only reveal that he expected a favourable response from her, but there is no evidence for a direct relation between his emblematic invention and plans for a religious campaign at the court in Brussels. Chapter H discusses Van Veen's transformation of the worldly cupid of the Amorum emblemata, with his Ovidian mischief and bitter-sweet Petrarchist characteristics, into a spiritual agent in the form of an ambiguous 'amor divinus' (oscillating between love from or love for God). Van Veen is the first to introduce the pair of 'amor divinus' and the personification of the human soul, 'anima', in the realm of the emblem. In tracing the origins of this motif, Buschhoff investigates not only percursors in Netherlandish print production (Goltzius / Matham, Wierix), but also the medieval tradition of bride-mysticism, based on the psychological interpretation of the Song of Songs.

The final chapter is devoted to an analysis of the relationship between word and image. Van Veen presents an especially intriguing case for this quintessential question in emblem studies, not only because he is one of the few emblematists who was an inventor in both media, but also because his polyglot works show a challenging variety of examples for each individual emblem. Buschhoff's approaches the issue by putting various emblem theories (Daly, Hekscher-Wirth, Porteman, Praz, Schöne, and Sulzer) to the test. She concludes that none of these approaches can really accommodate the variety encountered in the actual emblems. She therefore continues by giving an alternative classification of the correspondences of motifs in texts and images. This reveals, for instance, that the larger part (36) of the engravings in the Amorum emblemata find their origin in a textual tradition. This does not mean, however, that they merely illustrate the texts they accompany, as is predominantly the case in the Emblemata Horatiana. With their more explicit didactic aim, the spiritual love emblems prompt yet again different strategies. Still, in almost half of these emblems (28 out of 60), the picturae are based on their secular counterparts in the Amorum emblemata. In five of these, Van Veen even manages to keep the same classical quotations, which, as Buschhoff also says, must have appealed greatly to the readers who were familiar with this corpus.

These and similar conclusions are important new evidence for the flexibility of the genre. It also fuels new curiosity about Van Veen's interaction with his humanist teachers and friends. This is one of the areas, however, which Buschhoff does not really explore. It is somewhat surprising, for instance, to note that Van Veen's album amicorum is only twice referred to (on both occasions through the work of Müller-Hofstede; neither the original version, nor Van den Gheyn's facsimile reproduction of 1911 are listed in the bibliography). A historical contextualisation of Van Veen's intellectual horizon could have enriched Buschhoff's own source analysis.

This should not distract, however, from the fact that Buschhoff's monograph is a valuable contribution to emblem studies. The most important merits of the book are its groundwork into the textual and iconographical sources and its assessment of the partial studies that were published in the last fifty years, including the milestone contributions by Praz, Müller-Hofstede and Porteman. At a time when the main trend in this field is to focus on the rich application of emblemata in non-literary contexts, it remains extremely useful (indeed, necessary) to receive new tools that further our understanding of the actual emblem production itself.