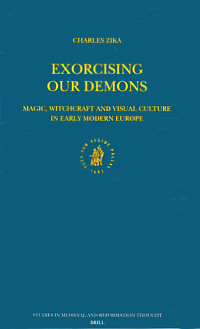 Magic and witchcraft are very difficult subjects to write about. Despite Keith Thomas' classical work, Religion and the Decline of Magic [1], and Stuart Clark's more recent ones, Thinking with Demons and Languages of Witchcraft [2], and contributions by outstanding scholars such as Richard Kieckhefer, Andreas Blauert, Michael Bailey, Wolfgang Behringer, Robin Briggs, Gábor Klaniczay, Lyndal Roper and Willem Frijhoff, the last word has not been written on these issues and they continue to fire the imagination of historians. All research dedicated to such topics, including this collection of Charles Zika's essays (originally published between 1976 and 1998), wishes to probe the complexities of human behaviour, the depth and resilience of 'irrational' beliefs, often relegated to the "geographical, cultural and chronological margins" (4). The author himself admits that his interest for this subject was stimulated by the fact that it had been expunged from the mainstream historical narratives, in order to suggest a seamless development from the Renaissance to the Enlightenment. Interest in magic and concern for witchcraft during the Renaissance and the Reformation was sometimes deliberately ignored in order to ensure a "worthy beginning for our modernity" (6).

This volume wishes to explore cultural discourses concerning the areas of belief and practice which were defined as marginal by the early modern churches. By focusing on magic, especially one particular manifestation of it, witchcraft, the author aims to offer an alternative historical narrative, which integrates the diversity of thought and behaviour manifest in early modern societies. Zika advocates a change in the point of view, challenging historians to document those areas of human experience which cluster around the figure of the demonic and which have often been grouped under the label of unreason.

First of all, this volume aims to explore the role of images in communication, their ability to convey cultural meaning and the development of a specific visual language in the sixteenth and early seventeenth centuries. This involves a survey of the fashioning of various motifs regarding witchcraft and an assessment of the contribution of visual images created through the relatively new technologies of print. By analysing the rhetoric of witchcraft and its impact on society, Zika attempts to understand the thinking of early modern people. Zika does not opt for a straightforward reconstruction of events related to witch trials but prefers to focus on the articulation of demonological theories concerning a particular form of magic, which has been labelled witchcraft. Because the witch is obviously understood as a cultural construct, Zika aims to explore the discursive links between the new visual language of witchcraft and other contemporary cultural discourses, especially the fears and fantasies associated with female sexuality and anxieties about the savagery of Christians in Europe, in the context of inter-confessional conflict, or those associated with experiences of natives abroad, within the framework of inter-cultural encounters.

Zika aims to investigate the transition from earlier images of witchcraft, forged in the first decades of the sixteenth century, which positioned it firmly within the discursive framework of gender and sexuality, by highlighting the dangers of ignoring or reversing a correct gender order, to later images of savagery and destruction, which pose more serious threats to the wider community. Throughout the volume Zika is interested in exploring the effects of the changes in European social and cultural life.

These essays interact, even if not always explicitly, with major debates in the historiography of the last decades of the twentieth century. Zika takes into account the existing literature on witchcraft (which has undergone dramatic changes, starting with the 1970s), the results of social, cultural and religious historians (who have drawn on the contributions of anthropologists and performance theorists), the cultural analysis of ritual practices (in both present and past societies, undertaken under the influence of anthropological studies), and a broadening of the conceptual field, through the insights of feminism and psychoanalysis. Moreover, Zika proves his familiarity with German and French, not just with Anglo-American historiography. While establishing links with previous scholarship, the author also highlights ways in which research can move forward.

The first three essays of this volume deal with the relationship between humanist learning and interest in magical traditions, two further studies explore the connections between religious beliefs and practice and the exercise of power, while the majority of the articles are dedicated to witchcraft. The final texts in the volume are a very useful historiographical survey of the role of the visual in history and a brief history of sixteenth-century Nuremberg. The introduction attempts to give coherence to the whole by advocating a change of perspective focused on social communication and cultural meaning.

One of the major assumptions underlying this collection is that images act as powerful agents in the conceptual and communicative processes of many societies, particularly in the age of print and print-making. In societies in which modes of communication were predominantly oral and visual, witchcraft images were fashioned in relation to various iconographical and semiological systems.

The other major assumption, although never explicitly stated, is that many of the codes, which were used to frame these discourses, were religious. In the early modern period religion served as an ideological underpinning for all social and cultural phenomena. Under the influence of Richard Trexler, Zika advocates a broader understanding of religion, taking into account its social, political and cultural dimension, highlighting the critical exchange between religion and other cultural domains. Consequently, throughout this volume, religion is viewed as a cultural resource, able to define behaviour and identity. Starting from the premise that religious culture is deeply embedded in society, Zika attempts a primarily semiotic, structuralist approach to the imagery, which focuses on the exploration of associations and inversions.

The argument relies on a well-defined body of visual sources and literary works, especially by northern European artists and theologians. The essays combine minute iconographical analysis with an interpretation of the dominant motifs within the cultural framework of the early modern period. Perhaps less comfortable with actually analysing the images, Zika is masterful at interpreting them within their broader societal and cultural framework, frequently tracing the visual and literary references for various iconographic motifs, and thus reconstructing the emergence and growth of a particular motif. Moreover, by analysing iconography, Zika attempts to identify which elements of the complex theological and legal discourse concerning the witch were considered important by visual artists, in the hope of gaining some insight into the cultural meaning of witchcraft within a broader society, that is, beyond the confines of the university, pulpit and courtroom.

While the introduction attempts to link the essays into a coherent argument concerning magic, witchcraft and the role of visual culture in communication by outlining some of the broader issues addressed by these studies, the articles themselves fail to give the impression of a coherent book on the visual culture of magic and witchcraft. This is an ambitious project through the complex historical questions it raises. While the role of the visual in communication and in the articulation of cultural constructs is convincingly demonstrated, the broader social issues addressed are not easily sustainable on the basis of the evidence used. The reader is left with the feeling that the last word has not yet been written on witchcraft and that an overarching explanation concerning its place in early modern society still needs to be forged.

Beyond the obvious advantage of increasing their accessibility, the publication of these articles as a book is useful as it allows one to trace the development of Zika's ideas on magic and witchcraft through two decades and highlights recurrent themes. It also emphasises the development of methods, the widening of the range of documents and the evolution of source critique. The essays are brimful of original ideas, interesting questions and thought-provoking statements. They convincingly demonstrate that for early modern people magic and witchcraft were no mere flights of fancy, but yet another mirror through which to look at their society. These studies contribute to an important discussion about significant developments in the history of late medieval and early modern European culture. As the author himself envisioned, these texts are not the conclusion to a discussion but rather a provocative invitation to continue it further.

[1] Keith Thomas: Religion and the Decline of Magic. Studies in Popular Belief in Sixteenth and Seventeenth Century England, London 1971.