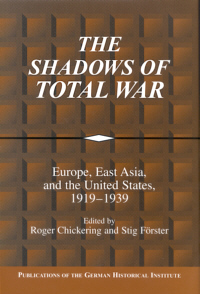 The publications series of the German Historical Institute in Washington, D.C., has become a mainstay in international comparative history. Volumes on Versailles 1919, the significance of the year 1968 as a turning point in global history, and the Vietnam War have set new standards in carefully crafted international history. Other volumes were on rights cultures, racism/xenophobia, and consumerism as American and German/European social phenomena in a comparative framework. An ongoing series of conferences on "total war" is another focus of this series, with separate volumes on the American Civil War/German Wars of Unification, the pre-World War I period, and the Great War. The essay collection The Shadows of War is the fourth volume in the series and continues the debate about the issue of whether "total war" is an ex post facto abstraction by historians, or the actual reality in the development of fighting war and thinking about it, starting with the revolutionary wars in America and France in the late 18th century.

This collection of essays is well structured around the common theme of whether discourse about "total war" became the hallmark of strategic cultures in the interwar period. The editors define total war in a thought provoking introductory essay as "total mobilization in advanced societies" producing "total control" and paradoxically also "total chaos" as a result of war (vide 1918/19 and 1945). The central theme of the age of total war, however, is the "plight of the civilians" (be it in Belgium and Northern France 1914ff, or the Soviet Union and Germany 1941ff) (12f). Chickering and Förster are careful project managers in not promising too much, admitting that the paradigm of total war is a highly contested one ever since Clausewitz thought about "absolute war" (6f). Like any collection of some 20 essays, the results are mixed, even though the standard is almost uniformly high. We have here a happy combination of mature senior scholars combining their craft with outstanding junior researchers. The biggest "shadow" hanging over the interwar period, as it turns out was World War I, how it was fought and how both soldiers on the "steely" frontlines and civilians on the hungry home fronts suffered through it. Much of military thinking during the interwar period concentrated on how not to repeat the bloody messes of stalemates on the Western fronts and how the military elites could restore control over the business of war-making, which had increasingly eluded them during the war.

Master craftsmen of twentieth century war Gerhard Weinberg, Hew Strachan and Dennis Showalter set the context for the interwar period. From his august perch Weinberg surveys the interwar period where people could not imagine another war to ever start again, while soon after the war Japan and Italy were planning to do exactly that, namely to unleash their expansionist pre-1914 policies. German post-World War I governments conceived of diplomacy as "a continuation of war by other means" (26), while Hitler's vision of racial-exterminationist global war matured. Many in the West failed to take the wildly gesticulating Austrian corporal seriously. Neville Chamberlain did warn him in late August 1939 that he should not cherish the illusion that a war against Poland would be a short one. Strachan shrewdly outlines the new "utility of war" where air war and blockades undermine morale and lead to collapse, not to speak of the undermining the just war doctrine. While the British maintained their faith in continental blockade, the Germans were preparing to break such a blockade with pocket battleships, not submarines. Both seemed to draw wrong conclusions from World War I. Showalter's conclusions are similar to Weinberg's when he argues that "great-power policy became the conduct of war by other means." Wilson's "open covenants openly arrived at" were subverted to "overt hostilities publicly expressed" (55f). You can almost hear the laughs Showalter produces with his ironic presentations at conferences in the liveliness of his writing even on subject as serious as interwar "strategic cultures" and national variations thereof (British "paralysis" through air attacks, French "management" of war, German "mass" and "force" through Volkskrieg, and Italian "compensation" of weakness in Europe through imperial adventures in Africa).

The "legacies" of the great war are covered in a section with essays by Hartmut Lehman on the protestant clergyman Paul Tillich and his pacifist "religious socialism" that predictably landed him in exile in the U.S. after the Nazis came to power. In a tightly argued comparative study Deborah Cohen demonstrated how British and German veterans policies produced unanticipated results. The miserly British state largely relied on philanthropists to take care of the wounded and maimed, while Germany gave generous benefits to its vets. The paradoxical outcome was, however, that the British vets remained loyal to the state while the Germans hated the Weimar Republic. In a tour de force James Diehl outlines the "militarization of politics" in postwar Germany where the military was ubiquitous. Soon after the end of the war a variety of civil guard groups, who did not accept defeat and situated on the political right such as the Freikorps and later Orgesch, began proffering a culture of military preparedness and vigilantism. They cried and battled for a "national dictatorship" to replace democracy, which then could embark on total mobilization for total war. They created the intellectual climate so favorable to the Nazis. They prepared the way for the ideology of the "front experience" to be replaced by Volksgemeinschaft becoming Wehrgemeinschaft (108). Some may read this chilling essay as a cautionary tale for our day and age of "homeland security".

My favorite section is the one on "visions of the next war". Stig Förster's students Timo Baumann and Daniel Marc Segesser tease the shadows of total war out of operational and strategic thinking in French and British military journals, while Hamburg historian Bernd Greiner pursues the same discourse in the American Infantry Journal. Markus Pöhlmann traces the wars of interwar historiography over the war guilt issue in official national military history writing on World War I, especially the German effort. It is the story of a mighty struggle over the memory of the war, but also the cynical instrumentalization of military historians by the state. And then there are the brilliant intellectual history treatises by Roger Chickering and Thomas Rohkrämer on General Ludendorff's and Ernst Jünger's evolving postwar ideas on total war. In his effort to place guilt everywhere but himself, Ludendorff's tortuous postwar intellectual journey led him towards the idea that total war was "the Great War done right" (174). Chickering's intellectual portrait is that of man who slips into postwar political activism on the Right as a result of the burden of his role in the war and his obsession with clearing his name. The eventual troika of scapegoats he settles on - Jews, Freemasons and Catholics - that the Nazis could agree with. Ludendorff's path towards "pathological sectarianism" (169) is a pathetic one, which does not take away from the fact that he had a major influence on German nationalist right-wing discourse and thus on Hitler too with whom he broke after the Munich Putsch of 1923. Jünger's intellectual/spiritual journey is no less tortuous. First he embraces the common soldiers' suffering in the Stahlgewitter of the Great War and rejects the new all consuming total war driven by modern technology. By the 1930s he advocates technology used by a modern army as the means to power in a total state. This advocate of an "authoritarian, nationalist, socialist, and militarist political order in Germany" (190) never had to pay the price after 1945 for being an intellectual Vordenker for Hitler and the Nazis.

The essays in the final section most clearly adumbrate the coming of total war. Wilhelm Deist recycles his ideas about Nazi war preparations, rearmament efforts and the coming of World War II. Klaus Maier leaves no doubt that the aerial bombardment of Guernica by the "Condor Legion" in the Spanish Civil War clearly presaged the coming of terror bombing of civilian populations. Hans-Heinrich Nolte portrays Stalin's domestic "war" against the kulaks as another harbinger of total war, as does Giulia Brogini Künzi (another talent out of Förster's Bern seminar) in her analysis of Italy's terror campaign against Ethiopia. Ever since the war against Turkey in 1911/12, Italy had been at war off and on. This seems to have given notable Italian strategists such as Douhet an edge in thinking about the coming of "total war". Louise Young writes about the building of Japan's empire in China through the lenses of mobilizing the home front and the business community with the Japanese army embarking on total war and going berserk in the process.

Many of the essays in this volume demonstrate how the 1920s acted as an intellectual hinge in thinking about ever more destructive future wars, while in the 1930s the first applications of total war doctrine on the actual battlefield crop up. This and the final volume in this projected "total war" series should do away with much of the intellectual uncertainty about total war becoming the "master narrative" of military conflict in the twentieth century - by the 1940s it had arrived.