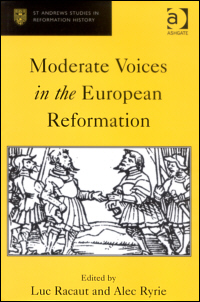 With confessionally partisan historiography now largely a thing of the past, historians no longer see the European Reformation as a dichotomy but as a spectrum. In this volume the two ends of the spectrum are Rome and Geneva (though one could plausibly argue that Münster represented an even farther end of the scale). The sixteenth century, its editors remind us, prized concord above all other public virtues, and yet its principal characteristic was strife. The essays assembled here explore a number of cases of those who advocated or practiced "moderation" among and between the confessional divides of the Reformation. The editors cast a very wide net in defining this term, so that "moderation" includes the institutional (Anglicanism, Gallicanism), the political (confessionally cautious courtiers of various dynasties), the theological (irenicists, converts), as well as the tactical (Hungarian Calvinists making common cause with Lutherans in the face of royal Catholicism). The geographic concentration of the collection is chiefly England and France, with a few glances at central Europe.

Most of the collection's contributors teach in the British Isles, and given the Church of England's historical claim for itself as a via media among Europe's reformations, we should perhaps not be surprised that concern for "moderation" would arise among scholars working there. The editors are quick to point out that they see this as a distinct category from studies of religious toleration and compromise, of which there is a growing historiography, but the contents of the essays look similar to much work that has been done recently on questions of confessional coexistence and the accommodation of religious dissent. Elizabeth Tingle's essay on the 1562 Colloquy of Nantes, for example, reads like much current research on local cases of confessional coexistence. The Nantais made this attempt at reconciliation between Catholics and Huguenots even as the French civil wars commenced because of their own local political configurations and a homegrown inclination to seek local solutions to problems of civic division. Such instances can be found in many communities across confessionally fragmented Europe. Insofar as "moderation" embraces notions of coexistence and compromise, it is an increasingly well-mined field.

One of the most thoughtful essays in the volume is Allain Tallon's exposition of sixteenth-century Gallicanism, pairing it unexpectedly with Anglicanism as a French version of the via media. Some French Christians held out hopes that the traditional "Liberties" of the Gallican Church would allow it to function as a "third way" between sectarian Catholicism and Protestantism, but such projects foundered on thorny differences over doctrine and liturgy that grew sharper and sharper as the sixteenth century progressed. The Gallicans further rejected Anglicanism as a model because they were wary of royal control over the church. The French prelacy's embrace of the Tridentine canons, Tallon argues, was in fact entirely consistent with its Gallican traditions of loyalty to Rome. Moderation in this case could clearly be defined in any number of ways. This point is also underscored in Ethan Shagan's fine exploration of Anglican, Puritan and Catholic attitudes towards adiaphora in Elizabethan England. "Things indifferent" - mostly ceremonial or liturgical issues - were also subject to varying interpretations, which, as the author demonstrates, rested on often intricate understandings of such theological essentials as faith, conscience and the interpretation of Scripture. Within the celebrated middle way of the Elizabethan church lurked still more viae mediae. Shagan concludes that "moderation" could have a considerable polemical edge to it, and its advocates were not always motivated by a desire for harmony and concord. It is not, he argues, the most useful analytical category in studying the European reformations.

Indeed, the editors of the volume admit as much: in their introduction they concede that "moderation" as an idea can be ambiguous and even vacuous. It is precisely this nebulousness, they argue, that makes the subject suitable for examination because the sixteenth century ascribed so many different meanings to it. This "diversity of moderation" served many different purposes, only one of which might be reconciliation. In the case of Graeme Murdock's Hungarian Calvinists, theological and liturgical moderation - in this case a kind of rapprochement with Lutherans - was a means of survival. Elaine Fulton meanwhile argues that the Habsburg court's attachment to religious moderates and politiques during the reign of emperor Maximilian II reflected a desire to retain dynastic influence over the Catholic church in the Habsburg lands and further its program of reform there. Given the sixteenth century's cultural (if seldom realized) inclination to concord, perhaps moderation can be most usefully studied as principally a means to obtain social harmony and political control. One of the threads common to almost all of these essays is precisely that political dimension to moderation; in all the settings of these essays - Anglican England, France in the religious wars, imperial Vienna, confessionally divided Hungary - moderation is cast as a means to an end, whether that end was to prevent civil war, extend royal power, create or maintain a national church, secure local or regional control over religion, or simple survival. Theological or irenic moderation, that is, questions of doctrine, plays a secondary role in most of these essays, possibly because its advocates in this era were a decidedly small group. Kenneth Austin argues that Immanuel Tremellius, the Italian Jew turned Catholic then Calvinist who became a leading Hebraist in the 1540s, was a moderate voice in his deliberate reticence about the controversies of the day. Such prudence comes across, however, more as a healthy sense of self-preservation than any intentional self-fashioning as a theological moderate. Most of the figures and movements considered in this collection clearly viewed moderation more as an instrument for larger political or ecclesiological agendas than as a good in and of itself. What is missing from these discussions is any sense of how or even whether sixteenth-century cultural and political authorities used the word. We certainly know what their opponents called moderates: Nicodemites, politiques, Epicureans, libertines, crypto-Catholics or crypto-Protestants. But how did such people describe themselves? "Moderation" carries more than a hint of anachronism as a descriptor.

This volume can also be seen as part of a larger reaction among historians to the confessionalization paradigm that has for the last couple of decades loomed over the scholarship of the Reformation. First proposed by historians of the Holy Roman Empire, confessionalization emphasized the hardening of the disparate reformation movements (Lutheran, Calvinist, Catholic) into fixed confessional blocs, with clear boundaries demarcating one religion from the other. This approach was useful in that its comparative dimension highlighted the parallels and similarities in the political and cultural trajectories of the various European churches. But such clear delineations of confessional boundaries existed more in the minds of political and ecclesiastical authorities than they did in the lives of ordinary Christians. A general practice of rough religious coexistence - itself a type of moderation - could be found nearly everywhere in confessionally divided Europe at some point or another. Such "moderations" were of a more practical, quotidian nature rather than the programs of theological or political moderation examined in the essays here. Still, the ambiguities, compromises and rapprochements presented in this volume are a salutary reminder that the people of the Reformation often resist the confessional categories we historians sometimes try to impose on them. The sixteenth century, it seems, was just as capricious as our own.