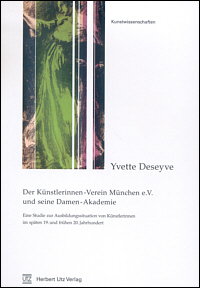 Yvette Deseyve's volume on the Münchner Künstlerinnen-Verein and Women's Academy presents research originally undertaken as part of the author's Magisterarbeit at the Institut für Kunstgeschichte at the Universität München. The author brings together a significant body of documentation on these important institutions, including statistical tables on membership growth, membership and student lists, and a register of the teaching faculty and courses offered between 1884 and 1920. Well-organized, systematic, and thorough, this information will serve scholars well into the future as a definitive reference source. The text that precedes the documentary appendices places the Künstlerinnen-Verein and its academy in the historical context of women's art training as well as the cultural context of the institution of the Verein in general in the period. This broad framework allows for a lucid description of the role and function of both institutions in the Munich art-scene and how the experiences of women artists were, very broadly speaking, structured by certain gender conventions.

The Münchner Künstlerinnen-Verein was founded in 1882, amid a widespread cultural phenomenon of the founding of Vereine. By 1884, there were 982 in Munich, 30 of which were devoted, as Yvette Deseyve reports, to "Kunst und Wissenschaften" (36). The founding principles - Münchner "kunst- und kunstgewerbetreibenden Damen Gelegenheit zu gegenseitiger Anregung in ihrem Schaffen und gegenseitiger Unterstützung in ihren Bestrebungen zu geben, Sinn und Geschmack für das Schöne zu heben und das künstlerische Verständnis in Frauenkreisen immer mehr zu entwickeln" - (50) came to serve between 700 and 800 members over the next 20 years. The author traces the growth of the organizational structure as well as many of the individual leading personalities of the Münchner Künstlerinnen-Verein. Of special interest is the practical help that the Verein provided to women artists: the founding principal of mutual support found material expression in a system of loans, support for exhibitions, health insurance, and, in 1899, a residential house for women artists (59-63). The Verein also sponsored competitions with prizes and eventually, scholarships for the Women's Academy.

The founding of the Women's Academy followed closely on the establishment of the Münchner Künstlerinnen-Verein, putting the founding principles into action. It rapidly became a vital testament to the success of the institutions. Beyond mutual support and aesthetic education, the Women's Academy made significant contributions to the professionalization of artistic training for women. Enrollment at the Women's Academy grew at a rapid pace relative to that of the Verein, and by around 1910 it enrolled more than 450 students. The curriculum was traditional at its core, with perspective, painting technique, art history, and anatomy among the required classes. Despite an extremely broad range of supplemental courses, Yvette Deseyve asserts that study at the Women's Academy could not adequately replace the curriculum at the official Art Academy for reasons of intensity rather than structure (76-77). She goes on to argue nonetheless that the successes of the Women's Academy must be read as evidence that it promoted "eine professionelle Ausbildung" and not "eine Ausbildung im Sinne der höheren weiblichen Allgemeinbildung" (78).

Unlike the academy run by the Verein in Berlin, which continued to operate after reforms enacted under the Weimar government granted women access to state-run academies, the Women's Academy in Munich closed its doors after the summer semester in 1920 (88). Evidently, the Women's Academy had also become, with the loss of state patronage after the first World War, a financial strain on the Münchner Künstlerinnen-Verein (89). Unfortunately, the reader is left wondering what were, in the author's opinion, the decisive factors in the closure of the Women's Academy. Was it the financial strain, or was it a principled (if ironic) fulfillment of the goal of making professional artistic training accessible to women? Had the Women's Academy reasoned itself out of existence when the doors of the Munich Academy were opened to women?

She places this issue in the still-broader context of whether and how the integration of men's and women's artistic training would be resolved, and she shows how the Women's Academy served as an important model for proposals to create two separate institutions (90). The acceptance of women at the Munich Academy rendered this point moot. Yvette Deseyve nonetheless concludes that the acceptance of women was brought about "hauptsächlich aufgrund des äußeren Drucks, den politischen Umständen aber auch den organisierten Forderungen der Künstlerinnen, weniger aufgrund eines inneren Reformbedürfnisses der Akademie" (91). In the conclusion, she characterizes the Münchner Künstlerinnen-Verein as typical for the period for its attention to the practical concerns of its members. She also proposes that it was atypical for its dedication to a network of "gemeinsame Ideale" (101).

Her conclusion is one of several places where the goal of description seems to limit the reach of the argument. In the case of the notion of "gemeinsame Ideale" cited above, for example, the author does not state what these shared ideals were, how these related to specific issues within the women's movement in the period, or what point on the spectrum of feminist activism the Münchner Künstlerinnen-Verein occupied. Likewise, in her discussion of gender-specific artistic pedagogy and academic reform, she discusses such familiar issues as study of the nude and gender-separate art training, but she does not discuss with what these institutional conventions have to tell us about how gender was operating in these tumultuous periods. There is a parallel reluctance to address such traditional art-historical concerns as stylistic currents and the question of tradition versus modernity. Her documentary approach to the institution as a whole seems to prevent a more detailed discussion of the artistic politics within the two institutions, though she does go into a fair amount of detail with regard to social class and financial structure. She claims that "Der Verein selbst keine künstlerische Programmatik formulierte," (109); this may lie outside the scope of her study, but as with the operations of gender-not simply the categories-the apparent absence of a program is an open invitation to investigate the program that is inevitably there.

Overall, Yvette Deseyve's book is an important source on this significant pair of institutions. It brings together a great deal of documentation that is otherwise scattered among a variety of archival sources, and in this regard it will be an important resource for scholars working on either the sociology of women's art institutions or individual women artists. Like the documentary appendices, the text is clearly written, logically structured, and contains a great deal of interesting historical material. The documentary impulse leaves a few conceptual issues unexplored, but the book is a significant contribution to the ongoing project of writing the history of women artists.