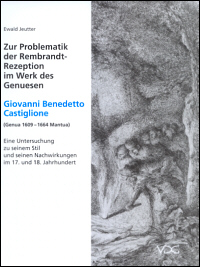 It is no secret at all that Giovanni Benedetto Castiglione made use of Rembrandt's etchings for his own work. In his "Cabinet des Singularités" of 1699-1700, Florent Le Comte already recognised the "gout de Rimbrant" in Castiglione's prints. And in fairly recent art historical studies and exhibitions, this part of Rembrandt's fortune in seventeenth century Italy was briefly touched upon as well, among others in exhibitions and the accompanying catalogues in Rome in 2002/03 (Rembrandt - Dipinti, incisioni e riflessi sul '600 e '700 italiano) and Épinal in 2003/04 (Rembrandt et les peintres-graveurs italiens de Castiglione à Tiepolo). However, a thorough investigation of the work of the Genoese artist in relation to that of his Dutch colleague was never undertaken. Ewald Jeutter's book sets out to do so.

An elaborate exposition on the importance of Rembrandt's etchings for Giovanni Benedetto Castiglione and his workshop assistants forms the pivot of the book. The Dutch master's examples were hardly ever used in a straightforward manner, as Jeutter argues. Instead, they were used to create an entirely personal visual language. Castiglione was especially eager to assimilate Rembrandt's chiaroscuro as a means to guide the beholder's attention in the direction of the essential elements in the depiction. Several of his compositions and motives were inspired by Rembrandt's prints as well. For instance, the etching of "The raising of Lazarus" (B. 73) forms the point of departure for several of Castiglione's creations and the Dutch artist's Oriental heads can be recognised in many treatments of the same subject by his Genoese colleague. At the same time as Giovanni Benedetto Castiglione, his younger brother Salvatore and other artists in the studio seem to have drawn inspiration from the same examples. And the author points out that in the Castiglione-workshop the prints of artists from Rembrandt's circle were much used as well. Jeutter's thorough analyses show his in depth knowledge of the oeuvres of the aforementioned artists and he draws many interesting parallels. The examples given are so many that inevitably not all of them are equally convincing.

To create his own "Bildwelt", Rembrandt's etchings were not sufficient for Giovanni Benedetto Castiglione, as Jeutter explains already in the introduction. The author takes great pains to make clear that Castiglione consciously combined the Dutchman's naturalism with Poussin's classicism. Therefore a full chapter is dedicated to the influence of Nicolas Poussin on Castiglione as well. There is no doubt that Poussin's star was rising in Rome just before the middle of the seventeenth century and that, as Jeutter argues, his work had a considerable impact on Castiglione. Rembrandts prints, as well, were certainly relevant for the Genoese artist's development. But isn't Rembrandt's influence on Castiglione mostly limited to his etchings while Poussin's classicism can be detected most clearly in his paintings? Painting must have been Castiglione's core business. His earliest biographers Raffaello Soprani and Filippo Baldinucci hardly pay attention to his activities as an etcher. And that his work was mainly a mixture of the styles of Poussin and Rembrandt is in my opinion a rather limited view of Castiglione as an artist anyway.

In focussing on the importance of both Poussin and Rembrandt for Castiglione, Jeutter forgets to mention other obvious visual sources. For example, he must have known and used the work of Jacopo Bassano and his workshop as well. Like Castiglione, Bassano was known as a specialist in painting animals. And both artists treated many similar subjects, like the voyages of Biblical heroes. Bassano's inventions were widely available through the prints by the Sadeler. And if Rembrandt's prints could be found in the Castiglione workshop, would it not be possible that many others were available to him as well?

According to Jeutter, Castiglione's choice for the work of Rembrandt is an important sign for the appreciation of the latter's art in Italy in the seventeenth century. To support his thesis, he gives an overview of Rembrandt's work there in the same period. In addition he discusses the influence of Rembrandt on the work of Stefano della Bella, Il Guercino, Luca Giordano and Mattia Preti. Indeed, Della Bella turned to Rembrandt's work, too, but he did so while working in France. And the author's discussion of the other Italian artists is not at all convincing. In taking Rembrandt as an example, Castiglione seems to have been the exception rather than the rule in Italy. One could even ask why it was the Frenchman Le Comte who first recognised Rembrandt's influence on Castiglione. If the Dutch master was that important for Italian art in this period, why didn't Soprani and Baldinucci mention this?

The last part of the book deviates from the issue of Rembrandt's reception in the work of Giovanni Benedetto Castiglione. Here, it is shown that Rembrandt's work could still be found in Italy in the eighteenth century and that a few artists drew inspiration from his prints occasionally. The reception of Castiglione's work in the same period is also discussed here. It is interesting to see that in several instances Rembrandt and Castiglione inspired the same artists. The work of Giovanni Battista and Giovanni Domenico Tiepolo is a beautiful example. In fact, in a letter of 1757, quoted by Jeutter, the Venetian "dilettante" Anton Maria Zanetti wrote to his colleague Pierre-Jean Mariette in Paris that some of Giovanni Domenico's prints could make both Rembrandt and Castiglione rise from there tombs (170).

The book would have benefited considerably from any concluding remarks. It is sometimes difficult to follow the author's line of reasoning or determine what he is trying to prove. The omission of a conclusion is felt even more, because the introduction is not very clear in this respect either. For example, towards the end of the book, all of a sudden we find ourselves in the eighteenth century, but nowhere it is explained why.

Notwithstanding its flaws, Jeutter's study is a considerable contribution to the literature on Giovanni Benedetto Castiglione and the reception of Rembrandt's work in Italy. Especially the descriptions of Castiglione's artistic development and style deserve praise.