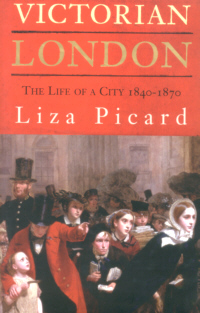 As a volume that follows tomes on 'Restoration London', 'Dr Johnson's London' and 'Elizabeth's London' this instalment by Liza Picard seeks a depth of detail that is not usual in academic interventions, learned journals or cloistered seminars. Appendices with useful comparisons to present-day life in London ('what you could get for your money', 'currency and measurements', 'retail price index') typifies the approach of a book delightfully stuffed with things you did not know about the Victorian capital but which is light on historiographical innovation. Its sheer comprehensiveness is a tribute to Liza Picard and testifies to the vibrancy of history currently researched and written outside of university departments.

The author for all intents and purposes is not a trained historian but nonetheless has a tutored eye for detail. Consequently the pages of Victorian London are full of unfamiliar facts. We find that newspapers in the age of Victoria were sold with their pages uncut and correspondingly middle-class readers tended to carry folding knives for the purpose; we are taken inside into the parlours of the poor and discover the types of flowers on display (whether real or wax); we get to know the price of a parrot in the East End; that toothbrushes were usually used in conjunction with toothpaste made of gunpowder; that the first dentist drill was worked by clockwork; that false teeth were initially made of porcelain; and that four mutes on horseback in Victorian rituals of death were employed to follow the coffin. There is little reflection on these fascinating tit-bits, save for a wonderful account (almost a sub-plot to the book) where we learn how our author - a retired barrister - experienced living and working in London in the period after 1945.

We are told that this Victorian building 'is still there' or that structure is 'where the Odeon is now'. Comparing Victorian servant life to 'distant days when I employed a nanny', or the lack of female lavatories in Victorian London which remained the case when Liza Picard was a pupil at the Bar (she had to carry a giant key that hardly fitted her handbag) is meticulously footnoted. Even her Victorian zinc and mahogany bath in her student house in Holloway is evoked as evidence to be compared to the period 1840-1870. Here we can see the exposed architecture of the book and how the book came to be written in a lifetime of observation of the lives, rituals and narratives of London and Londoners. In a limited sense this gives real insight into the Victorian period from the perspective of the 1940s and beyond.

Yet the source material is stubbornly conventional and belongs firmly to the moment of the New Social History of the late-1960s and 1970s: Henry Mayhew, Hannah Culwick, Flora Tristan and Hippolyte Taine are culled for albeit fascinating gobbets of the 'physical reality of daily life'; a promise made and kept on the dust-jacket. Even greater detail is salvaged from the biographies of the ordinary citizenry or the advertising that decorated domestic magazines or popular guidebooks. Still she asks questions that are not asked by historians working in the academy who are shamed into ignoring what appears to be simplistic and whose work is too often hidden in thickets of self-referential footnotes or jargon that Picard joyously avoids. What did Victorian gentlemen do with their top-hats when they arrived at a public destination or in large numbers found themselves cramped into small spaces? Why this may be an important historical question and how it may alter historical approaches to the period is less obviously tackled.