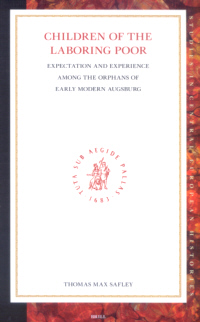 Since the seminal works of Ariès and Foucault, we have seen many fine studies on children and adults in different educational, disciplinary and charitable establishments that were so characteristic of early modern Europe. Thomas Max Safley, professor of history at the University of Pennsylvania, joins this research tradition with an impressive and original contribution.

The driving force of Safley's volume is to present the laboring poor as individuals and actors in their own lives. His case consists of three Augsburg Orphanages whose records on the 5734 children admitted between 1572 and 1806 make his principal sources. By making full use of his remarkably rich source material, he contributes with insightful and critical arguments to many current scholarly discussions.

While reading the introduction, I found Safley's approach rather hardhearted, as in the case of a twelve-year old Hans "who may be said to have connived in his own destruction" (5). Anyone who has studied boys in reformatories has probably come across histories like François Truffaut's Les 400 coups. I also recoiled from a positive reference to an article in Wall Street Journal (1994), entitled "Bring Back the Orphanage", that characterized orphanages as "a way to get the benefits of middle-class life" (26) for deprived children. Even if the orphanages in Augsburg may have largely succeeded in this (save for children who died), they had - as the author repeatedly points out - few equals in early modern Europe and, one might add, perhaps not too many in the 19th century either.

However, Safley's work proved to be different from what I expected after reading the introduction. In fact, he writes in a very emphatic way of these children, mothers and fathers who tried to cope with all the vicissitudes of life in early modern Europe. He gives plenty of space to individual boys and girls, many of whom the reader gets to know by name and person: how they came to be placed in the orphanage and how they fared there, whether or not they survived into adulthood and if they did, what became of them. He also describes and reflects at length about the circumstances and actions of children's fathers, mothers, siblings and even relatives and neighbors. Many of them get a name and personality.

He is equally sympathetic to the efforts of the magistrates and poor relief administrators who decided on children's admittance to the orphanages, their education, placement and future Nahrung, signifying not only earning one's living, but also social competence and a place in the community. He manages to give a human countenance even to these authorities. They began to appear to me as concerned fathers whose experiences with their own children had taught them that when dealing with children and young people you need plenty of forbearance and optimism.

I appreciated Safley's attempt to do justice to them all: the magistrates as well as the unhappy and miserable but at the same time resourceful children, mothers and fathers who appear so very human on the pages of the book. Safley also keeps himself from passing judgment on various shady figures in his source material. Instead, he tries to tease out the rationale of their actions and behavior as they themselves might have seen it.

The volume is divided into three parts. In the first part, "Before the Orphanage", Safley presents the circumstances that led to the admission of children to the orphanages. In this part he introduces a critical discussion on Richard Wall's idea of the adaptive family economy. Two other ideas, "traditionalism" and "living in the present" as economic and social orientations of the poor are also critically discussed. Moreover, E.P. Thompson's moral economy, proto-industrial "self-exploitation" and Gary Becker's unhistorical "economic approach" get their share of critic, too. Safley is out to prove that the laboring poor pursued risk management and exercised a rationality of their own. He argues that in their economic transactions the laboring poor presented such flexibility and opportunism that "might best be described as resourcefulness" (73).

The second part, "In the Orphanage", first presents the process of admission and negotiations associated with it. Safley argues that petitioners, "whether rich or poor", acted in a way that was rational in an economy of scarcity (166). The daily life of inmates is presented in terms of "disciplining of appetites", "spirits" and "laborer". Safley describes and analyses how "orphans appropriated the disciplinary regime for their own purposes" (219), e.g. by the use of cash that they all managed to acquire. He concludes that orphans learned more and other things than orphanages intended.

The third part, "After the Orphanage", presents the different ways children left the orphanage, dead or alive. Orphanage records are comprehensive enough to enable Safley to present statistical information. As much as 96 % of orphanage girls whose placement is known became domestic servants, whereas boys could follow a range of occupational preferences. In principle, the orphanages admitted only able-bodied children aged at least six years, and this contributed to relatively high survival rates. Mortality rates (Fig. 4) tell of the terrible mortality in the City Orphanage during the Thirty Years' War, but also of the life-saving improvements in hygiene in the Lutheran Orphanage (less so in the Catholic one) after 1780.

As a proof of how well the Augsburg orphanages achieved their goal of turning children into self-sustaining wage laborers, Safley presents figures on orphanage outcomes (Tables 10, 17 and 18). They appear somewhat problematic. Of the total of 5734 children, 2281 died, while no outcome is listed for 1297. This leaves 2156 surviving children for whom the outcome is known, at least up to a point. According to Safley, surviving children numbered in all 3587, and 2720 (76 %) of them were placed in a trade or service while only 218 are identified as "failures" (313, 406, quotation marks original). However, it remains unclear where in such calculations the children are for whom no outcome is listed, neither is it quite that unproblematic to ignore the deceased. The rates of success and failure appear different depending on whether they make a percentage of 5734, 3587 or 2156 children.

The impressive amount of information is detailed enough to enable other scholars to use it to their own purposes (the original German texts are often available in notes.) Those interested in the laboring poor, beggars and vagabonds will find information on many proven and makeshift solutions for how to keep body and soul together. And those studying women's business skills may take keen interest in, say, the resourceful mother of three Dirrnast children.

By generously sharing with his readers his fine source material, Thomas Max Safley gives the us an opportunity to reflect about children's and their parents' lives in early modern Europe and also to ponder over whether or not to agree with his conclusions. Thanks to the richness of details all schools will find particulars to support their interpretations. This is a fair way to write a highly learned, extremely informative and appropriately opinioned study.