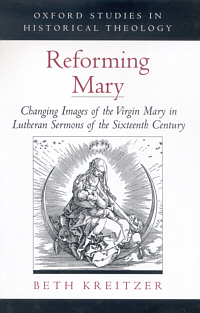 The problem of how the Reformation conceptualized the ideal spiritual role of women has enjoyed a central role in Anglophone Reformation historiography for more than two decades now. Nothing suggests that this situation is changing. Beth Kreitzer's compact study of the first three generations of Lutheran preaching on the Virgin Mary joins this body of work and contributes to it in interesting ways. A dominant issue in this historiography is the matter of how much and what the Reformation changed for women. By analyzing Lutheran sermons, Kreitzer delivers a subtle and complex picture of how Reformation preaching sought to alter notions of the Virgin common in late medieval central Europe.

Kreitzer focuses on Postillen (postils, or pericopic sermons) published by Lutheran authors before 1580. Three initial chapters deal with sermons that coincided with the three Marian festivals that the early Lutheran church continued to mark: Annunciation, Visitation and Purification (Candlemas). Two subsequent chapters treat occasions for reflection on Mary not associated with particular festivals: her response to Jesus's childhood escapades in the Temple, and the wedding at Cana. The final chapter treats a score of lesser occasions for considering Mary in sermons, including Christmas and the former Marian holidays no longer celebrated by Lutherans (conception, birth and assumption of the Virgin). Each of these sections considers material extensively, highlighting not only main themes but also subordinate and diverging ideas. The book closes with a series of brief biographies of the sermon authors, which will primarily be of use to scholars coming to the book from women's studies and unfamiliar with Kreitzer's authors, who are central players in Lutheran theology; specialists in this area will prefer to consult the more detailed reference works from which Kreitzer drew these vignettes.

The Lutheran treatments of Mary in these sources was variegated and sometimes ambiguous. Following a strategy of close reading and interpretation throughout, Kreitzer isolates both continuities with and changes to the medieval tradition and quite admirably does not prioritize either strand. Lutheran preachers remained compliant with the statements of the great early ecumenical councils and retained both Mary's virginity at Jesus's birth and her own perpetual virginity. They continued to associate her with the ideals of faith and humility. At the same time, they reshaped her role considerably by rejecting her as an active intercessor with God - a change perhaps most apparent in the claim that gratia plena did not mean "full of grace" in the sense of independently possessing grace, but rather "gracious" (holdselige) in the sense of having received divine grace - and eliminating her role as a model for the celibate life by stressing her marriage. As the Reformation continued, preachers became increasingly critical of Mary, denying her the sinless status that the early Reformers had continued to grant her and stressing her mistakes and sins. Kreitzer sees this emphasis on a more human, less saintly Mary as an attempt at moral disciplining of congregations. The general trend is toward a more passive figure: "Gone was the powerful, merciful, mother Queen of Heaven, and in her place remained only the humble, chaste, obedient girl" (141). Improper attitudes toward Mary also became the object of preaching apparently intended as a shield against Roman Catholic ideals and continued allegiance to traditional rituals such as churching.

Kreitzer is a careful analyst of her materials, contextualizing them gratifyingly both in earlier Christian theology and the late medieval tradition. Still, the great strength and simultaneously perhaps the most significant weakness of the work are identical: Kreitzer's narrow source basis and tightly formulated analytical focus. Her book is only about pericopic sermons and the ideas presented in them as they relate to Lutheran culture's re-envisioning of the Virgin. The upside of this strategy is the disciplined, exhaustive consideration of these sources in themselves, as well as the reader's perception that Kreitzer is able to answer the questions she formulates effectively and efficiently. In particular, the question she asks of how symbols take on meaning is ideally suited to the gender studies questions she poses and answers, and readers primarily focused on the matter of Marian ideals will leave this reading with answers that are not only clear but also sophisticated. The weakness, if we should call it that, is that other readers will leave the book with questions about the wider relevance of these ideas in society, art, systematic theology and piety. While these are not Kreitzer's questions, still the end date of 1580 seems to beg the question of how preaching on Mary related to theological developments up to the Book of Concord, particularly given her intriguing comments on the relationship of the early development of Marian theology to Christology - a matter that was also the object of vehement disagreements among Lutherans in the decade before 1580.

Aside from her pronouncements on the status of Mary in Lutheran theology, Kreitzer's most significant contribution lies in her discussion of the content of preaching. Although the preaching that led up to the Reformation has been the object of a greater level of interest in the last decade, one of the largest problems for scholars seeking to understand the congregational level of the confessionalization process in Germany is that we still have relatively little knowledge of what pastors were actually preaching on any number of topics. With Kreitzer's book, we now come a step closer, particularly with her suggestion that Marian festivals and discussions of Mary were a means for pastors to confront and counter persisting (or revived, Tridentine) ideas about the Virgin. The most significant epistemological problem in sermon studies is the question of how printed sermons related to the content of actual preaching; here, Kreitzer holds back in her claims, insisting that the sermons merely expressed the ideas of an educated segment of the Lutheran elite. In fact, insofar as speakers adapt their ideas in order to communicate effectively with their listeners, it may be the case that the slightly increased hostility toward Catholic images of Mary reflected not only pastors' wishes to instruct their audience but an increased tension in congregations themselves about Mary's role by the third generation of the Reformation. In other words, perhaps, by 1580, Lutheran congregations were as ready to hear about notions of Mary's humanity, sinfulness and passivity as pastors were to preach about them.

In sum, though modest in both design and conclusions, Kreitzer's work provides a great deal of information that has the potential to fertilize a number of ongoing discussions on theology and preaching, in addition to conclusions that will be of interest to readers in medieval and Reformation history as well as theology and women's studies. A clearly written and intelligent book that will also speak to lay readers, it is warmly recommended.