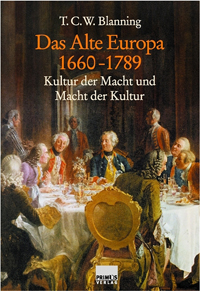 Oxford University Press published the original English edition of Tim Blanning's The Culture of Power and the Power of Culture: Old Regime Europe 1660-1789 in 2002. This book has been much acclaimed as an important work of synthesis focused on the interaction between power and culture in late-seventeenth and eighteenth-century Europe. The text of this more recent German edition is essentially the same as the original.

What initially strikes this reviewer is the good quality of the translation. Amongst historians Blanning is one of the best writers of English prose, combining clarity with wit, and an economy of language with an intolerance of jargon. Its style - not always associated with academic German - is essential in assuring that this book is accessible not only to the specialist but beyond to the interested public. The translator, Monika Carbe, deserves plaudits for preserving the sense and spirit of the original.

The basic argument of this book is simple enough: governments in eighteenth century Europe were confronted by increasingly well-informed, well-educated and critical publics. These publics were informed by and found expression in a proliferating set of institutions, including the newspaper press, public concert halls, lending libraries, coffee shops and Masonic Lodges. These, collectively, supported the 'public sphere'.

This terrain is familiar for those who have read the work of Jürgen Habermas, whose ideas are very much apparent in this volume. However, where Blanning parts company with Habermas is in his rejection of any Marxist social determinism: the public sphere, so Blanning, was definitely not uniquely bourgeois. Nor was it restricted to those who might crudely be placed at the progressive end of the political spectrum. On the contrary, as nobles, clerics and those one might retrospectively label politically anti-progressive were equally prominent operating in this new public space as were merchants and professionals.

Less obvious, possibly, for a German audience is the influence on Blanning of critics of the 'modernist' approach to the history of nationalism. The imprint of Adrian Hastings - a theologian by training - is particularly noticeable. Hastings's thesis as presented in the series of Wiles Lectures delivered in 1996 and subsequently published in The Construction of Nationhood was a direct response to Eric Hobsbawm, whose own most important publication on the subject - Nations and Nationalism since 1780 - is similarly based on a series of Wiles Lectures given in the 1980s.

Hastings refutes the position of the 'modernists' that nationalism is essentially a phenomenon that was 'invented' at the time of the French and Industrial revolutions. Instead, he traces its origins back much further - well back into the early Middle Ages where England is concerned - and, appropriately enough given his professional background, focuses on the translation of religious texts into vernacular languages. According to this interpretation, nationalism was a powerful force well before the eighteenth century.

Blanning's unease with the 'modernist' interpretation is apparent in some of his earlier works (for example, in The French Revolution in Germany: Occupation and Resistance in the Rhineland 1792-1802, published in 1983). However, in these earlier works Blanning is less forthright, referring to 'national consciousness' rather than 'nationalism', and stressing the importance of religion in particular in shaping Rhenish responses to the French.

In the book under review, in contrast, the anti-modernist case is put in typically forthright fashion. Nationalism in this period, so Blanning, was not simply restricted to a few intellectuals ensconced in ivory towers. Rather, it was a popular ideology and one sufficiently powerful to shape government policy, especially in Britain. As just one example Blanning cites the so-called 'War of Jenkins' Ear'. This broke out in 1739, when a reluctant British government was in effect bounced into a war against Spain by public hysteria created by alleged mistreatment by the Spanish authorities of British merchant seamen.

However, it was not the British government that was the main victim of critical public debate on foreign policy. Britain, on the whole, performed rather successfully on the international stage in the eighteenth century. Even the American War was not a complete disaster, thanks to some last-minute victories in 1782 that reasserted British naval supremacy. A favourable geo-political position that enabled Britain to focus much of its effort on naval warfare contributed to this success. So did its ability to raise large sums of money, something ultimately dependent on a set of institutions that were inclusive of those - taxpayers and creditors - who provided the cash.

France, in contrast, experienced disaster. Geo-politically it split its effort between naval and continental warfare, never focusing entirely on the one or the other. However, geo-political vulnerability was not the key variable (after all, Prussia, whose run of success was comparable to Britain's, was arguably the worst positioned of all the major powers). Rather, the politico-financial institutions in France were grossly inadequate. It was not so much that the French nobility was under-taxed - it was not, though the Church was - but rather, that too much revenue was siphoned off thanks to large-scale sale of public offices instituted under Louis XIV. Nor could the deficit in tax revenues be made up by borrowing at advantageous interest rates: the absence of parliamentary checks on royal power meant no creditor could be sure of getting his money back.

The result of these short-comings was that France staggered from one foreign policy disaster to the next. The Seven Years' War was especially bad with defeat at the hands of Frederick the Great at Rossbach (1757) and the loss of Quebec (1759) to the British being amongst the worst moments. The rebound in the American War proved ephemeral, with the failure of France to assert itself even in its backyard - the Netherlands - on the eve of the French Revolution providing the final straw.

Indeed, that the Revolution should break out at this point was, according to Blanning who takes a Rankean line on this, inexplicable without reference to this latest foreign policy disaster - one that finally convinced the leadership of the French army that the monarchy in its present form was no longer worth preserving. In terms of military power it had failed.

Culturally, the props had long since fallen away, thanks to the isolation and ossification of the royal court in Versailles. Decline on this front had set in already in the last years of Louis XIV's reign. A chance to reverse this trend was missed by the subsequent regency, which failed to transfer the court back to pro-Jansenist Paris when opportunity beckoned in the 1720s. There followed that fatal combination of moral degeneracy and despotic outbursts that characterised Louis XV's reign; the public relations disaster of his successor, in which the Austrian match was a key component, completed the descent.

The importance of cultural politics in shaping the destinies of regimes and states is no longer especially contentious. Nor is the breaking of the Marxist linkage between the rise of the public sphere and the rise of the bourgeoisie. More likely to provoke protest is the argument concerning the importance of nationalism in the eighteenth century coupled with the 'primacy of foreign policy'/military coup slant on the origins of the French Revolution.

However, from the perspective of a Napoleonic specialist looking back, the juxtaposition on the one side of France (failure), and on the other Britain and Prussia (success), is the element that is least convincing. It is not so much that Prussia was heavily defeated in 1806/7 and only survived as a state thanks to the intervention of the other Powers: no matter how strong its institutions and brilliant its leadership, it is difficult to envisage any entity sharing the location and resources of Prussia winning against Napoleon's Grande Empire.

More telling is what happened a few years later, in 1813, when the Prussian monarchy experienced its own military coup, namely the defection of General Yorck at Tauroggen. The regime, of course, ultimately survived thanks to a favourable foreign policy outcome in which the other Powers collectively played a more important role. However, the episode does suggest that Prussia's success depended to a higher degree on the brilliance (or not) of its ruler in a way that Britain's, whose power was more strongly embedded institutionally, did not. Britain prospered, even under George III's uninspiring predecessors and successor. The Year of Victories (1759) - the high-point for Britain - came at the tale end of two reigns that were hardly public relations success stories. Prussia, in contrast, was something of a one-man show in the eighteenth century.

It would be inappropriate to conclude this review with a complaint that Blanning fails to extend his analysis of power and culture into the period of the Revolutionary Wars and Napoleon. Instead, the conclusion needs to highlight the scale of the synthesis accomplished in this book. Where else can one find so much detailed analysis of topics ranging from opera to the banking system, from architecture to warfare, and the personality of individual rulers to religion? Equally impressive is that all this is woven together into an accessible whole.