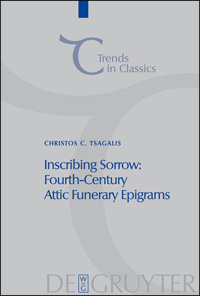 Tsagalis' monograph is a welcome literary, socio-historical, and performative analysis of the 160 Attic funerary epigrams of the fourth century BCE that have already been collected in P.A. Hansen's Carmina Epigraphica Graeca volume II (nos. 466-626). In the introduction (3-7) Tsagalis explains that the project's undertaking was at the urging of the epigraphist Angelos Matthaiou, who persuaded the philologically-inclined Tsagalis that the sheer number, well-circumscribed nature, and the accessibility of these fourth-century Attic epigrams made them an ideal place to investigate the emergence of literary features that are found in greater abundance and with greater sophistication in the literary epigrams of the ensuing Hellenistic period. He also acknowledges that others have recently taken an interest in inscribed epigrams as important evidence for crucial social concerns, most notably Ewen Bowie, Jon Steffen Bruss, Joseph Day, Marco Fantuzzi and Doris Meyer.

In the first chapter (9-61), Tsagalis examines how and why gnomic expressions have been incorporated and integrated into these epitaphs. He begins with a brief sketch of the concept and use of gnomai in Greek literature from Homer and Hesiod through Pindar and Bacchylides, on to Herodotus and Thucydides, through to the tragedians (especially Euripides), culminating with an examination of Aristotle's treatment of the subject. Next, he closely examines gnomic expressions in sixteen fourth-century Attic epigrams found in Hansen's corpus. He then argues that as the inscribed epitaph invites each new passerby to orally re-stage the epitaph, the gnomic statements found therein play an important intermediary role between the private commemoration of the deceased and the monument's public display by encouraging each new reader to actively cooperate in a culturally-determined decoding process that brings the memory of the deceased to life again through another re-enactment of the initial commemoration. In addition, he argues that gnomic expressions help mitigate excessive mourning, which is consonant with Athenian legal measures implemented before the fourth century that were aimed at moderating grief at funerals.

In the second chapter (63-134), he examines in detail two recurrent forms of poetic imagery within fourth-century Attic epitaphs, that of the soul leaving the light of the sun and that of the soul traveling to the chambers of Persephone. Here he argues that these poetic and religious motifs were self-consciously employed and as such they reveal the multiple levels on which these funerary monuments produce meaning and must be interpreted. He notes that the latter expression has virtually replaced any references to Hades and that this reflects contemporary religious beliefs and cultural values circulating in fourth-century Athens.

In the third chapter (135-213) he focuses on how the deceased are praised within socially-oriented categories such as familial role, sex, age and profession. In particular, he looks at the typology of arete and sophrosyne and argues that in the fourth century these virtues lost their aristocratic overtones and instead were applied more democratically to both men and women of various statuses and occupations in order to attract a wider audience; as such they reflect changing fourth-century attitudes about the public display of private matters.

In the fourth chapter (215-307), he charts the narrative techniques and diction that evolved on fourth-century Attic epitaphs including the use of deictic markers, the reader as passer-by, parataxis, the use of relative pronouns, asyndeton, person, word-choice and more. Here he demonstrates the greater influence of tragic poetry, sophism, and rhetoric on fourth-century epigram at the expense of epic. He also notes that fourth-century epigrams are longer, more elaborate, and focused on familial matters than in the past.

In the conclusion (309-319), he summarizes his findings and argues that the poetic coloring, use of gnomic statements, elaborate imagery, diction, and the narrative expansion all represent a transitional phase in the evolution of the genre of the epigram. They also reflect a shift of interest towards res privatae that was brought about because of Athens' devastating loss in the Peloponnesian War.

Naturally, there are some areas where the book could be improved. Given that Tsagalis is working with inscriptions, it would have been advisable to include a list of standard epigraphical abbreviations such as CEG, SEG, or IG II2 as well as list of the epigraphical sigla (which are those of Hansen). In addition, while he says he only gives the equivalent IG number when an epigram is "quoted in full or thoroughly discussed" (1), it would have been better to give the standard citation in every instance rather than just the CEG number, plus his actual practice seems inconsistent. Why, for instance, are some of the sixteen epigrams listed on pages 17-19 given IG numbers while others are not (i.e., 3. = IG II2 13040; 5. = IG II2 5552a; 6. = IG II2 11016)?

Another weakness of the book is that Tsagalis mostly just accepts Hansen's supplements or corrections. One glaring instance was CEG 599 (74-75). In line three, the stone has ΣΟΥΣΤΕΚΑΣΙΓΝΗΤΟΥΣΛΙΠΟΥΣΑΕϴΑΝΕΣΑΗΛΙΟΥΦΩΣ, which Tsagalis, mostly following Hansen (who followed Peek), renders as σούς τε κασιγνήτους λ<υ>ποῦσ' {α} ἔθανες, <δ>ή<μ>ου φῶς, ... . He then translates this as "You died bringing pain to your brothers, o light of the demos, ..." Given that Tsaglis spends considerable time discussing the commonly recurring metaphor of "leaving the light of the sun" and how these fourth-century epitaphs are more focused on private matters, the acceptance of this restoration is doubly puzzling. I suggest we have σούς τε κασιγνήτους λιποῦσα ἔθανες <κ>α<ὶ> ἡλὶου φῶς, or if we assume the writer of the epitaph would not have composed a non-metrical line (always a hazardous assumption with these epitaphs) and there are instead more inscriber errors, then σούς τε κασιγνήτους λ<ε>ιποῦσ' {α} ἔθανες <κ>α<ί> ἠ<ε>λὶου φῶς would be better. In either case, the epigram almost certainly meant to say "You died leaving behind both your brothers and the light of the sun" - a sentiment fully consonant with the other evidence he presents. Another questionable reading of Hansen's that Tsaglis accepts is that of CEG 600 line 5 (=IG II2 5501), where he repeats (40 passim) Hansen's καὶ τὸ δικαιοσύν[ον τε φὶλο]ν τε φίλοισι προσεῖναι (τὸ δικαιοσύνον is a happax legomenon). I suggest καὶ τὸ δικαιοσύν[ην ποιεῖ]ν τε φίλοισι προσεῖναι (cf. Plato Respublica 444d, l.8). Finally, Tsagalis' acceptance (154) of Hansen's correction in line 4 of CEG 594 (=IG II2 13040) of μνημεῖον δὲ ἀρετῆς παισὶν ἐμοῖς ἔλιπ<ο>ν from μνημεῖον δὲ ἀρετῆς παισὶν ἐμοῖς ἔλιπεν is unnecessary and is inconsistent with the use of the third person in line three; clearly the laudanda's husband has set up the monument and he is merely stating that she (Chairippe) left behind a monument of her virtue with his children (the "my" merely stresses the pathos that only he is still alive).

In addition, there were other themes in the epitaphs that stood out for treatment. For instance, in the sixteen epitaphs that Tsagalis lists on pages 17-19, two refer to the goddess Tyche (nos. 14 and 16) and two others allude to her with the verb τυγχάνω (nos. 6 and 10). Thus the rise of Tyche's cult in the fourth-century in the literary and archaeological sources is paralleled in these epigrams and like the references to the chambers of Persephone, reflects an even starker evolution in cultural values and religious beliefs.

Finally, Tsagalis' study would have profited with more references to New Comedy (he only notes New Comedy's relevance in footnote 192 on page 194), given New Comedy's performative aspects and its preoccupation with res privatae that parallel what he argues is found on these fourth-century epigrams. One example from Menander is particularly apt, where at the preserved beginning of Aspis Daos, under the mistaken belief that his master Kleostratos was dead, "performs" a restrained but moving eulogy for Kleostratos' untimely death that clearly pays homage to both tragedy and the funerary context by employing several of the features that Tsagalis emphasizes, including tragic diction, a gnome, restrained language, and an εἰ-clause.

All these short comings, however, are minor; the present monograph as a whole succeeds at its goal of offering an excellent literary, socio-historical and performative mapping of a statistically significant body of metrical grave epigrams that bridge the gap between the archaic and early classical period and the renowned epigram of the Hellenistic period.