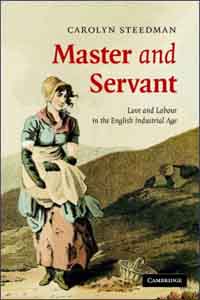 The West Riding of Yorkshire is one of the most evocative places in England for the study of early industrialization, and it is not coincidental that E.P. Thompson's The Making of the English Working Class (1968) returns again and again to this region. Its remoteness, hilly terrain, unpredictable weather and unconventional inhabitants have also fascinated romantic novelists and poets: Emily Brontë's Wuthering Heights (1847) is undoubtedly the most famous product of this. Carolyn Steedman's book presents itself, at least in part, as an effort to "take on" E.P. Thompson, as well as to make an argument for the relevance of Wuthering Heights (despite its being a novel) for understanding certain aspects of the social history of the region.

But the central concern of the book is something different again. At its heart this is a book about the life and writings of a local Church of England clergyman, the Reverend John Murgatroyd (1719-1806) of Slaithwaite near Huddersfield. Steedman, a longtime historian of women and domestic service, was originally drawn to Murgatroyd because of his relationship to his long-time servant Phoebe Beatson. This was not a romantic or sexual relationship. Phoebe worked for and lived with Murgatroyd and his wife Ann for twelve years, nursed Ann in her final illness, and then stayed on in Murgatroyd's house for another nine. But love - illicit love-does come into the story, because in 1801 Phoebe Beatson got pregnant by a local man named George Thorp who then refused, despite considerable community pressure, to marry her. One might have expected Murgatroyd, a clergyman, after all, to turn Phoebe out. Instead he supported her against her critics, kept her in his house, came to love the baby, and four years later, at his death, left Phoebe and her daughter a comfortable fortune in money and household goods. This book is, therefore, about a relationship that did not follow expectations, a relationship for which historians have few models.

In form the book is a rather loosely-strung series of essays about these people and their times. Chapter 1 ("On service and silence") moves quickly through the historiography of West Yorkshire in the late eighteenth and early nineteenth centuries, introduces an emphasis on setting and place through some rather elegiac passages, and asserts the author's interest in adding rural servants to the story of industrialization. Chapter 2 ("Wool, worsted and the working class: myths of origin") is a poetic account of techniques of spinning and textile production; Chapter 3 ("Lives and writing") introduces the main characters, with a particular focus on Murgatroyd; Chapter 4 ("Labour") is primarily about servants and the rather equivocal writings of the classical economists and political theorists about them; Chapter 5 ("Working for a living") traces Murgatroyd's career as a non-beneficed clergyman of the Church of England; Chapter 6 ("Teaching") is an extended discussion of Murgatroyd as a schoolteacher; Chapter 7 ("Relations") is on changing popular conceptions of the servant; Chapter 8 ("The Gods") is a meditation on varieties of Christian and pagan belief in this remote area; Chapter 9 ("Love") is about the Phoebe/George Thorp episode, Murgatroyd's decision to shelter the pregnant Phoebe, and his love for her child; Chapter 10 ("Nelly's Version") is an attempt to use Wuthering Heights to talk about the consciousness and agency of servants; and Chapter 11 ("Phoebe in Arcadia") returns to one of the recurring historiographical problems of the book, E.P. Thompson's failure to include domestic or farm service -the most common occupations for women - in his classic account of the birth of the working class.

A major challenge for the author is the vast disproportion between the evidence we have about Murgatroyd and those of the other principals. Murgatroyd was a journal keeper and an almost obsessive chronicler of the things he read. In consequence we know much about the ins and outs of his daily life and an enormous amount about his views on teaching, the classics, God, theology, and much else. But of Phoebe Beatson we know almost nothing. She likely knew how to read but not to write, and though Murgatroyd frequently makes mention of her work as a domestic servant and as a worsted spinner for a local proto-industrialist he tells us little about her as a person. Even less information has survived about her nemesis George Thorp. Steedman tries valiantly to compensate for this, most notably in the Wuthering Heights section, but the most effective parts of the book are those that focus unapologetically on John Murgatroyd.

But what an interesting character he is. He was, it is true, not a particularly original thinker. His diary is fairly terse (though Steedman does a great deal with what is there); his other writings appear, for the most part, to be extracts from other men's sermons or from pedagogical or advice books. And yet he emerges as a remarkably appealing, even lovable character, and it is a great strength of Steedman's book that she is able both to make us appreciate his personality and to explore, in some complexity, the moral touchstones of his life: his abiding faith in a largely beneficent God, a larger than normal generosity of spirit, a commitment to being a good neighbour and a responsible member of society, a capacity to forgive people a lesser man might have turned into enemies. And partly because the reader comes to have such affection for him, he becomes a window onto larger issues. The chapter on teaching is wonderfully sensitive and informs about local schools and the diffusion of new notions of child development (especially that of Locke) in the later eighteenth century. There are marvelous sections on teaching children about God, local rivalries with Methodists and nonconformists, the pitfalls of using pagan writers to teach children Latin, and the ways the evolving eighteenth-century approbation of the "pursuit of happiness" made its way into preaching and pastoral advice-giving.

There is more to this book than Murgatroyd, of course. Steedman's extensive knowledge of the history of domestic service in the eighteenth and early nineteenth centuries is used to good account throughout, particularly in her discussions of parish settlements and the servant tax, and she makes interesting and effective use of evidence from contemporary court cases. The book is studding with fascinating and learned asides on the classical economists, contemporary advice books, the topography of the West Riding, the many varieties of love that could swirl about a community or a household, the historiography of the region, and much else. Still, the author is somewhat less successful at developing a sustained narrative and at times she seems to trade clarity of argument for evocative atmosphere. There is much to be gained from this unusual book about unusual people. It certainly defies many stereotypes about the eighteenth century, and it is often beautifully written. At the same time readers would do well not to expect closure on larger questions about how historians conceive of the emergent English working class.