Kevin Ingram (ed.): The Conversos and Moriscos in Late Medieval Spain and Beyond 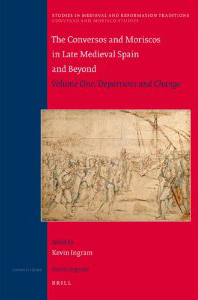 The Conversos and Moriscos in Late Medieval Spain and Beyond adopts an interesting and original approach to the history of religious minorities on the Iberian Peninsula. The book is the result of two conferences held in 2005 and 2006 that were organised by its editor, Kevin Ingram, Assistant Professor of Modern History at Saint Louis University (Madrid Campus). In these contexts, leading scholars in Converso and Morisco studies from within the American and Spanish historiographical schools gathered in order to contribute to an improved exchange of knowledge and approaches between the two traditions. This effort is also notable because the conferences involved not only historians but also philologists and literary historians. Bearing in mind the wide gap that exists between historians and philologists with regard to their respective publications, conferences and theoretical perspectives, it is especially important to bring together experts on highly specialized topics such as the study of Moriscos and Conversos from across various disciplines.

Reflecting the stimulating working atmosphere of the conferences, the contributions shift continually between literary and historical sources and topics; most are centred on cultural history. The wide scope of the analysis makes the book valuable for other scholars interested in the problems of religion, intolerance and religious minorities in the sixteenth century, establishing a very good springboard to jump into the stream of Converso and Morisco studies. Importantly, alongside essays by established experts, there are also articles by representatives of what can be seen as a new wave of scholars now beginning to make their mark.

The publisher has produced a high-quality collection of essays: it includes a map and full index and is part of the series "Studies in Medieval and Reformation Traditions".

One problem that should be mentioned, however, is the fact that some of the chapters have been published before, either as articles or sections of books. This is especially clear in the case of Michel Boeglin's and Vicent Parello's contributions, which consist of materials previously used in several articles. [1]

Morisco history is studied through literature by Barbara Fuchs, who follows the arguments of Márquez Villanueva (examined below) and Soledad Carrasco Urgoiti with regard to the influence of Moorish culture and its literary re-elaboration throughout the XVIth century. Similarly, in the more narrowly focused contribution by William Childers, the author draws our attention to the "use" of Morisco cultural difference as an adaptive resource, studying the zuiza festival that the town of Manzanares organized. The case study examined here is part of a wider phenomenon currently being researched by the author, in a way similar to that used by Trevor J. Dadson in his masterpiece, Los Moriscos de Villarrubia de los Ojos (Madrid / Frankfurt am Main 2007). The essay by Michel Boeglin offers an interesting approach to the problem of prophecy and the reconstruction of Morisco networks and social leadership in the Sevillian exile. Finally, the chapter written by Mercedes Garc&#237a-Arenal and Fernando Rodríguez Mediano, "Jerónimo Román de la Higuera and the lead books of Sacromonte," offers a selective analysis of some attempts to develop an alternative history of Spain, connecting the work of and remarking upon the personal relationships among three great forgers of the late XVIth and early XVIIth centuries. This article derives from the authors' recent book, Un Oriente Español (Madrid 2010), which is an essential work on this topic.

The parallels between converso and Morisco studies adds coherence to the entire collection. That is certainly the case in the masterly contribution by Juan Gil [2], who offers yet another of his delicate and carefully crafted essays, this time about similar instances of historical forgery and the depiction of a pure-blooded identity for Toledo's inhabitants. Here, Gil focuses on the works of the Jesuit Román de la Higuera and other forgers of history.

Inquisitorial sources are the basis of three chapters by Mark D. Meyerson, Leonor Zozaya Montes and Vicent Parello. I would particularly note the contribution by Mark D. Meyerson [3], which is a very fine analysis of how a Mediterranean crypto-Jewish network existed before the Diaspora of 1492. Meyerson, one of the most important experts on the Jewish and Converso history of the Valencian Kingdom, demonstrates the importance of the idea of redemption through the religious significance assigned to historical events (such the fall of Constantinople) and the advent of a Messiah for these societies.

The chapter by Nadia Zeldes, focussing on the Converso milieu in southern Italy, is very well sourced and based partially upon her previous work. Here, Zeldes offers new approaches and intertwines an analysis of secondary literature with new source material, shedding light on the history of the Sicilian Converso community. Their initial success in maintaining their social position and the later attacks on their success by the Inquisition and the crown forms an interesting parallel with the first forty years of Morisco history, even if its scholars have yet to realise the similarity in the degradation in status suffered by the Sicilian converts.

The Converso studies based upon literary sources contained in this book are not so well sourced, often reaching important conclusions based on relatively few examples. I would, however, highlight the chapter written by Francisco Pe&#241a Fern&#225ndez, which shows us unsuspected (at least by historians) Jewish influences of Solomon's History in the sources used by Cervantes for writing about the strange trip taken by Sancho Panza to Barataria and his later rule of this island. </p> <p>The editor's intentions are best realised in the articles by Francisco M&#225rquez Villanueva and Kevin Ingram which, respectively, open and close the book. These two articles centre on the idea that underpins nearly the whole collection: once the main lines of the historiography and literary history of the Conversos and Moriscos have been established, the most interesting question is about their degrees of integration and <i>fusion</i> with the dominant culture in XVIth century Spain. Put somewhat differently, the focus is on how and to what degree the inheritance of Converso and Morisco cultures intertwined with and influenced the <i>Siglo de Oro</i> culture. Villanueva explains the idea of <i>mud&#233jar</i> as not only a medieval but also a modern influence, a notion he has presented in other texts, such as his masterpiece, <i>Los Moriscos espa&#241oles (desde otras laderas)</i>. The chapter is a richly detailed historiographical counterpart to the recent works by Arabist Seraf&#237n Fanjul, who offers an obscure and negative evaluation of the influence of Islamic culture in Spain. </p> <p>In closing the volume, Kevin Ingram draws an overall picture of Converso studies ("Historiography, Historicity and the Conversos") and defines the main problems in different historiographical traditions about the importance of Converso influences on Hispanic culture. To do so, he recalls the XXth century polemic about the extent (and, indeed, even the existence) of Jewish and Moorish influences on Spanish culture. This argument was driven by two Spanish scholars exiled after the Spanish Civil War, the philologist Am&#233rico Castro and the historian Claudio S&#225nchez-Albornoz. Castro regarded such influences as essential for understanding Spanish culture, something neglected by S&#225nchez-Albornoz. But here the similarities between Villanueva and Ingram end, because the latter bases his argument, at least in my view, on a fairly weak critique. His review of the historiography of the topic is imprecise, neglecting recent, important authors who have studied the historiographical evolution in Spain. Furthermore, he has selected only those testimonies that reinforce his conclusion: they are described accurately enough, but are hardly representative of academic opinion. I really think that Ingram only found such denials of Converso influence in the History of Literature milieu, and I suppose that books as complete as this one contribute to overcoming the situation that Ingram denounces. But I have to disagree with the dark panorama that he paints, because over the last 30 years work by Spanish, English, American, French, Jewish and other scholars from a variety of fields has greatly enriched both our knowledge and the debates about this fascinating historical topic.</p> <p><br /><span class="underline">Notes</span>:</p> <p>[<a href="#fna1" name="fn1">1</a>] Regarding Boeglin, specifically in the Spanish periodical: <i>Historia, Instituciones, Documentos</i>, n&#186 34, 2007, 29-55, and in his collection of articles: <i>Entre la Cruz y el Cor&#225n. Los Moriscos en Sevilla (1570-1613)</i>, Seville 2010. In the case of Parello, "Los Mora de Quintanar de la Orden: un criptojuda&#237smo familial a finales del siglo XVI", Sefarad, n. 61, vol. 2, 2001, 395-418, and, "La complicit&#233 des Mora de Quintanar de la Orden (1588-1592)", in: <i>Familles, pouvoirs, solidarit&#233s</i>, Montpellier 2002, 350-365 (the latter translated into Spanish: "Inquisici&#243n y cirptojuda&#237smo: la complicidad de los Mora de Quintanar de la Orden (1588-1592)", in: G&#252;ell et D&#233odat-Kessedjian (&#233ds.), M&#233langes offerts &#224 Claude Chauchadis, Toulouse 2009, 317-330).</p> <p>[<a href="#fna2" name="fn2">2</a>] Author of the monumental work, <i>Los Conversos y la Inquisici&#243n sevillana</i>, Sevilla 2000-2002, eight volumes.</p> <p>[<a href="#fna3" name="fn3">3</a>] He published a short briefing of this article that compares the millenarian movement between the <i>Conversos</i> and the <i>Moriscos</i>, in the <i>XVIII Congr&#232s d'Hist&#242ria de la Corona d'Arag&#243. Val&#232ncia - 2004</i>, Valencia 2005, 1731-1740.</p> <p class="italic" style="text-align: right">Manuel F. Fernández Chaves</p> </div> </div> </div> <div id="page_footer"> <div class="ie6_font_size" id="separator"></div> <p>issn 1618-6168 / www.sehepunkte.de <img height="10" src="/images/sp10.jpg" width="10"> </p> </div> </div> </body> </html>